Hi guys, It’s a week I’ve been trying with no success to model the decoration of a cornthian capital of a column.
I’ve taken as example the image you can see in the attachment.
The issues I have:
1-The spiral decoration: I’ve tried the following solutions:
1.a: Extra Curves --> add spiral --> Bevel another curve with the profile. Results so and so, the resutling mash had tons of polys making it hard to model.
1.b: Extruded cube shaped as spiral (continuos extrusion, conform outer and inner loop with loop tools circle). Results extremely low poly, better control in adding details but really low low poly look, even after sub surf (tried to bevel, did not work for some reasons.
2-The foliage like decoration: I’ve just tried once, starting from a closed mirrored curve. The result was ok in the basic blocking shape, but the inner topology was a disaster filled with triangles, not cutable.

Have you got some advice to help me, please? I’ve searched youtube for a lot of tutorials, but there’s not a lot about capital. 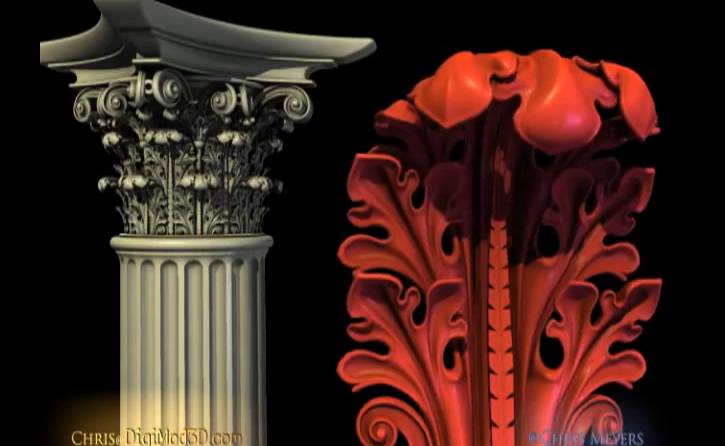 did one like that and not an easy task!
ended with over 50 K

this is a heavy 3D model with lots of smaller parts so wont be low poly !
difficult to use bump or normal map for this model!

I can show you my model if you need too let me know
looking at model it has like 300 K verts
and it is using a lot of modifiers !

I’d really appreciate to see your model and to understand which modifiers you used !

well for the acanthus leaves around you use and array 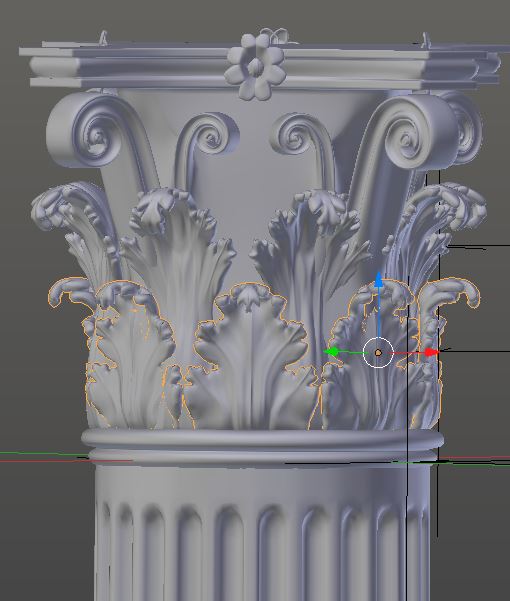 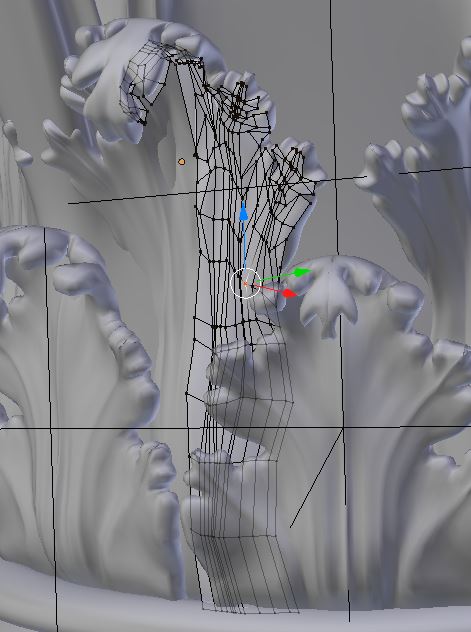 if leaves where not symmetrical then verts count would go up even more!

It seems to me your leaves are based on a plane subdivided, mirrored and with a solidify modifier, right?
What about the spiral decoration?

yes very basic use of mirror solidify array and subsurf

I think I saw a model like that on Blendswap !

the basic leave is almost low poly but with all the subsurf ect,
you end up with 300 K verts

depends what you want !

I would build several slight variations of the capital ornaments, and simply “stuff them in there” behind the ring of the column. Define each piece as a Group, then “duplivert” them around a properly-placed ring.

The column (also a group) will not actually be a single object, but who’s to know? The ornaments on real columns sometimes were separate castings, welded or bolted into place. They were certainly separate (casting) patterns. From the intended point-of-view, “down there,” it all worked just fine.

Tip: If you have a lot of these things to be seen from more-or-less the same point of view, first of all, don’t bother to model anything that the viewer cannot see. Second, you can generate an image by laying out the goodies flat and “photographing” them, then apply that as a texture to a transparent ring at the top of the thing. There’s no actual geometry up there anymore at all, but once again, “who’s to know?” If the light’s never going to be doing juicy-things against that finial, it doesn’t need spectacular geometry. (And if you do need to show it, it’ll probably be an extreme close-up (ECU) shot which will be the only shot in which super-detailed geometry is needed. Having seen up-close what it “looks like,” the viewer will “see” it looking like that. (Always ask: “how many screen pixels are we talkin’ about here?”)