hello,
does anyone know if it is possible to combine an armature animated/deformed character/object with a curvedeformer?

here is the result in softimage gif, here i can animate the character in the center(with bones) and then apply a curvedeformer,(result upper half),

unfortunately this doesn’t work in blender, at least I didn’t find a solution.
Maybe this (can) work with the 3.0 (geometry nodes).
but I would like to produce still in “official/supported” versions(2.94)

Thanks for any advice in advance

Sure it is. The situation you’re showing is an armature deform followed by a curve deform in the Z axis, on a cyclic curve. The only thing that’s different is that there is no separate “move along the curve” control from the armature: to advance the character along the curve, you move the entire armature, or the root bone, in the curve modifier’s axis.

You have, as always, a solution.

I had not even considered that,
My solution was: after the Armature a Hook_modifier
on the whole Geo (moving/rotate in Z), and after that the Curve-modifier!, works, however
with your advice you don’t need the hook-modifier. 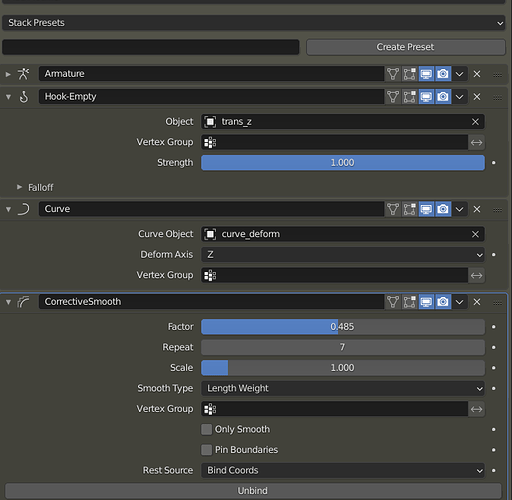 possibly animating with the hook modifier
a bit clearer because the armature remains in the center, matter of taste