I have a rigged character from Character Creator.

I want to separate the armature into a face rig and a body rig.

Reason being I want to apply facial mocap to the face and mixamo animation to the body.

1: Import character with full rig.
2: Separate facial bones into separate object.
3: ------- This is where the problem starts - reparenting the facial armature to the body armature.

I have tried ‘child-of’ and ‘copy transformations’ constraints but but the animation is totally messed up.

I want to keep all shape keys and vertex groups to later retarget mocap data.

Maybe there is a better method than separating the rigs - but I’m sure there must be a simple way to parent nicely.

Thanks in advance to anyone reading.

Ahh man I’m so sorry! I’m in China and VPN/Internet can be tricky uploading files to here. I’ll try again!

Thanks for trying to open it and help.

For brevity here are some pictures illustrating the situation right now. 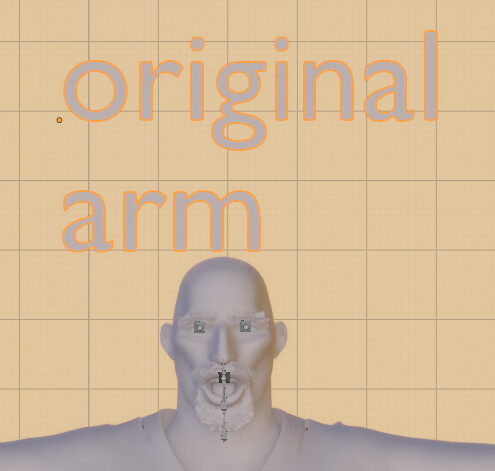 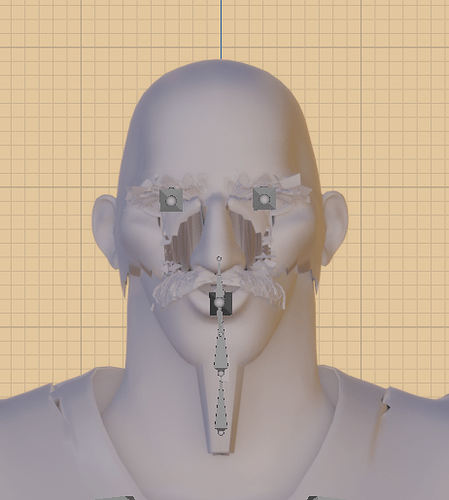 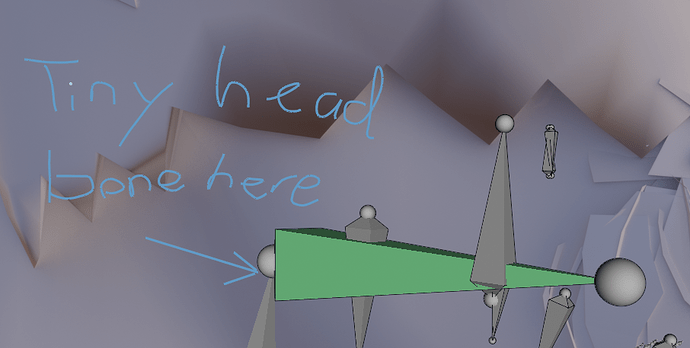 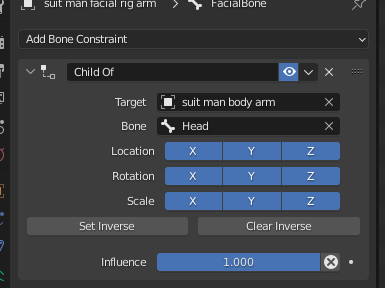 The body seems to move up after the parenting - If I reset the body bones there is no deformation in the face; but, the facial bones no longer move.

The first, biggest problem is that the head bone is broken, because it has a length of 0. Blender isn’t supposed to let you do that. Without a length, Blender cannot identify that bone’s axes, and so constraints like child-of aren’t going to work. If we edit that bone so that it has some length, the child-of will work properly (and is a just-fine way to do this.)

Next, we’re kind of doing double-duty with our “head” VG. We’re using it both as a deforming bone and as the limiter for the armature modifiers. Let’s create a new VG to specify which armature to use. Because your face isn’t weighted properly yet, let’s also rename your “facial bone” root to head, so we can just use the head weights from it for your facial armature. 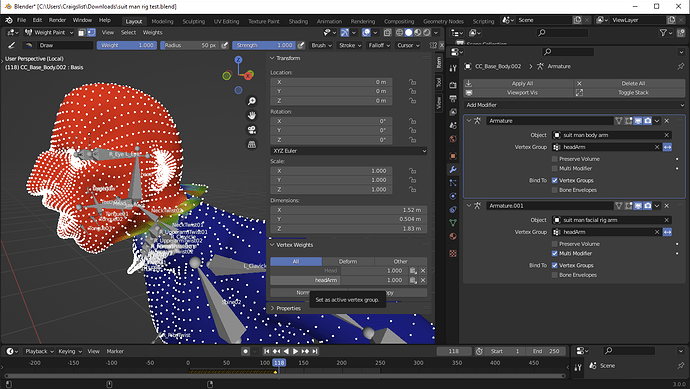 A multimodifier needs to be set up kind of counterintuitively, IMO. Pay attention to the VG settings on the screen shot: I do body, then face; both have the same, inverted VG; the second modifier has multimod.

Wow! The information and knowledge gleaned from your reply is a million times more than I achieved in a week of Googling.

Especially regarding the size of the bone influencing the axes. I has been playing with naming conventions and different constraints - I would never have done this without your help. Great thanks and respect to you!