Hi everyone, I know someone has encountered this problem before so I thought of posting it here.
Turns out that making a bird fly is harder than I thought.
I am getting comically bad distorts of my bird’s wings when I rig it, as it is not the same size as the wings at rest. Now I tried to get around it by animating the transparency of the “open” and the “closed” wings to visually enable the closed wings when the bird is roosting (they’re two separate objects), but it does not solve the problem of nasty inbetweens and a messy look altogether. How would you fix this problem? With better weights or with a better way of rigging in general?
I just wanted to know if some of you had solved this problem before, but I can also give a more detailed version of my process if you want. For now, here are four frames.

I haven’t done a bird before, but what it looks like to me is that your weights are too diffuse, at least on the leading edge of the wings. The leading edges should be relatively straight lines, not curves.

What pose did you try to rig it in? I wouldn’t try to rig a wings-folded bird, just a wings-outstretched bird.

Fan bones seem like they would be useful, especially in controlling volume.

Could you please explain this:

I am getting comically bad distorts of my bird’s wings when I rig it, as it is not the same size as the wings at rest.

Why aren’t they the same size? This will lead to failure:

Now I tried to get around it by animating the transparency of the “open” and the “closed” wings to visually enable the closed wings when the bird is roosting (they’re two separate objects),

Unless the switching is done as the camera view changes to hide the switch.

Anyway, I’d solve the deformation problem first, then figure out the wing switching bit. I don’t see why you would have to switch wings from open to closed.

What pose did you try to rig it in? I wouldn’t try to rig a wings-folded bird, just a wings-outstretched bird.

There is this thread that you may want to study although there doesn’t seem to much about how it was built. You can buy it I think to look at it. Although it is for blender 2.8.

The ability to bend the feathers are already there, maybe I didn’t exaggerate it enough in the quick flying animation

If you look in the documentation of under Rig Controls, no 13 shows the feather curve controls

Hi Randy, thanks for your response. I did not try to rig the feathers yet as it looked intimidating (I just added in a simple mesh which is why the size is different) but thanks to community members here I might just do that. I looked at the thread @a59303 mentions and it uses particle systems so I might use the same method as the crow there.

Hi thank you! I will try fan bones in my next iteration. I am using Auto Rig Pro’s wing rig, so I will play around with that. I tried to rig it in the wings-outstretched pose in the screenshots.

Hi @PyrusCanadensis - I looked a little deeper into this subject. I haven’t actually rigged a bird myself, but I did work on one once. You see, I updated the Big Buck Bunny bird character to work with blender 2.5x-2.7x, so I really dug around the file quite a bit. So I dug up the file and looked at it to refresh my memory a bit. 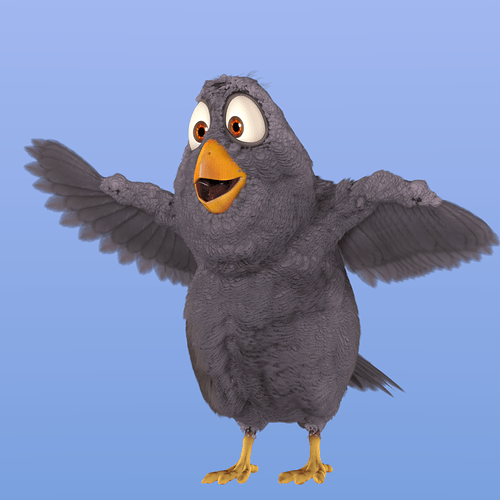 And here’s a shot of the wing rig in that pose: 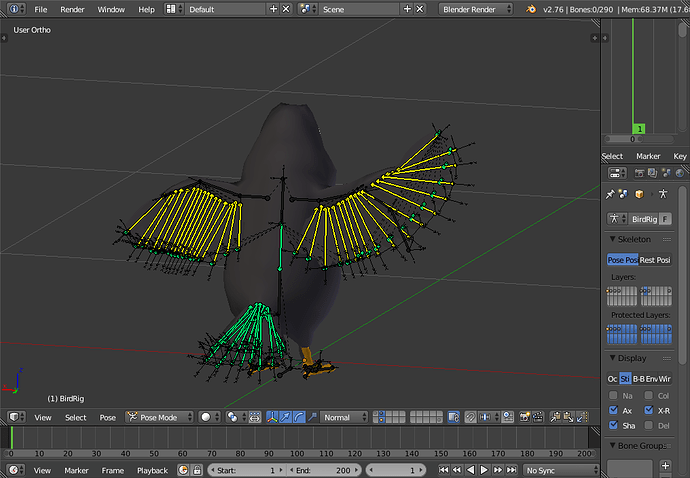 The yellow bones, each one of them are for a feather in the wing. They all had IK constraints on them, and the IK target bones are the little green ones you see at the end of the yellow bone. The leading edge of the wing was part of the body mesh. This part of the mesh was controlled by 3 bones, think - Shoulder, UpperArm, and LowerArm. The shoulder control bone only moved a few feathers, the upper and lower arm bone controlled most of the feathers. One thing I don’t remember is how the little green IK targets were controlled by the 3 main wing/arm bones. You rotate a wing bone, and the feathers fanned out.

The IK bones that controlled the feathers, didn’t actually control the feathers, they controlled tiny plane mesh objects at the back side of the wing arm mesh. Somehow, each plane had 3 feathers attached to it, they weren’t parented to the mesh. Some dupli-vert method, maybe? Anyway, this gave you top, middle, and bottom feathers of different lengths. That’s why I added in the render, in it you can see the middle feathers are longer than the bottom ones. There was only 1 feather mesh object, so the length was achieved by how they were connected to the planes.

The body mesh had a particle system on it. Each particle was a small mesh object that was the body feathers.

Anyway, hope the helps. I can post up the file if you want it. It won’t work in current version of blender, but you might be able to study it, the particle system on the body and how the wing feathers are attached, etc…

Thanks so much Randy! I just might study that for next time, I’ll let you know

You could have a look at this one,

I used this method for my pigeon (Which I did not finish!), as for folding/opening wings I think pigeons do something like this: 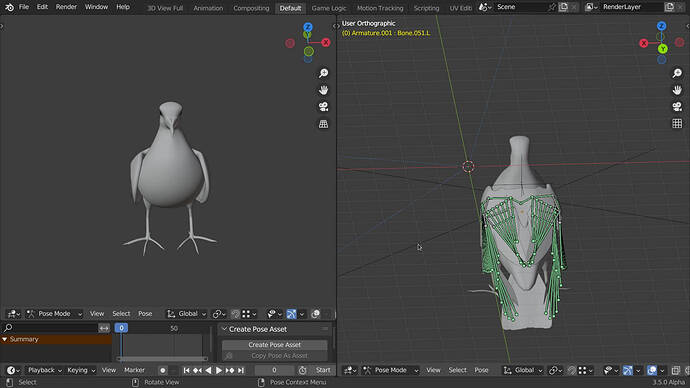 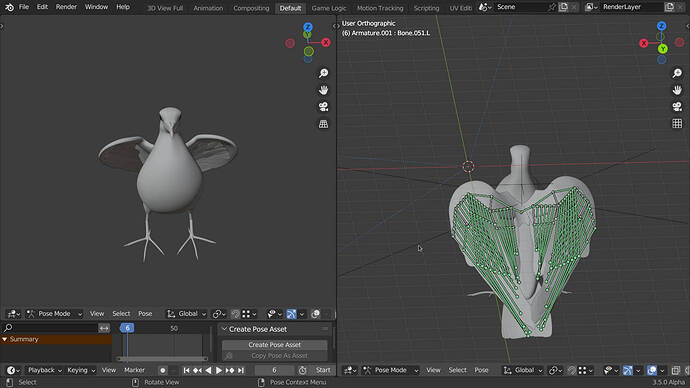 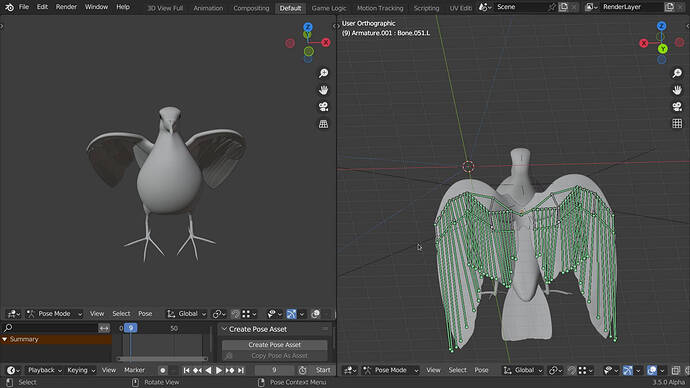 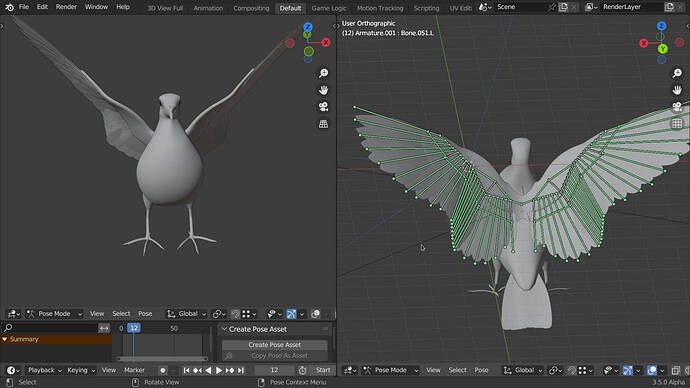 Recently I saw this video and thought of maybe redoing the wings with this method, it seems complicated but I like the idea as it looks like a good way to make sure the feathers do not intersect each other (mine do sometimes)