After dealing with Retopo and UVs, the fish is mostly ready for texturing. No news there in terms of process yet.

What I want to write about is the environment. Having to figure out the best way for making the volume cards of the atmosphere, I’m quite happy with the result. Going back to the original concept: The idea that would accomplish all of those objectives was to blend the ground with the background seamlessly. Bu having a pure black background and a pure black foreground, it would appear as if the 3D model didn’t have clear bounds. And I think what I have so far works quite well!


I love how the transition from being on top to being under feels very smooth thanks to the grass. That sounded weird.

What’s going on here? A view beking the magic: For he grass, the plan was to have it be completely black. Upon testing, I found it looked weird with all the rest of the scene being lit, and it also was a very good chance to introduce some high frequency detail to the scene. So I did the following:

First, I painted this sprites of grass in Krita. 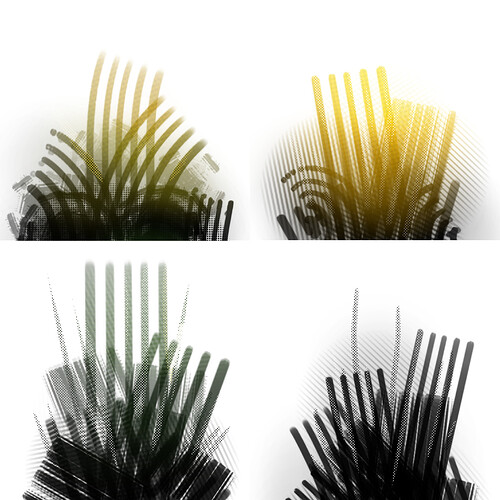 They have the light painted in and they range from fully lit to totally black. The black grass is the one that’s meant to be at the edge so you don’t notice the transition.

Then I made four image planes, one for each sprite, and gave them a material with no specular nor diffuse. They onlt have the emission I painted, so they wouldn’t react to the rilms and give away the illusion.

And to finish I scattered them through the surface with geometry nodes! Aside from randomising the rotation and scale, I made it pick the proper instance according to the distance with the fire, that’s in the center of the scene. The node graph looks like this: And the sparks are also made with geometry nodes, following this tutorial: https://youtu.be/Vmax39A-ehc

And I’ve decided that animating the fire should be much easier with geometry nodes, now knowing I can tweak the index of the instance depending on the point of the curve. And form a previous test, as long as they don’t have animated UVs, Alembic caches work fine in Sketchfab.

That will be all! Two major things left, making the fire and texturing the fish. Wish me luck!

Some other renders, just eevee emulating the lights in Sketchfab (parented to the camera, no shadows) and some compositing to emulate Sketchfabs post processing. 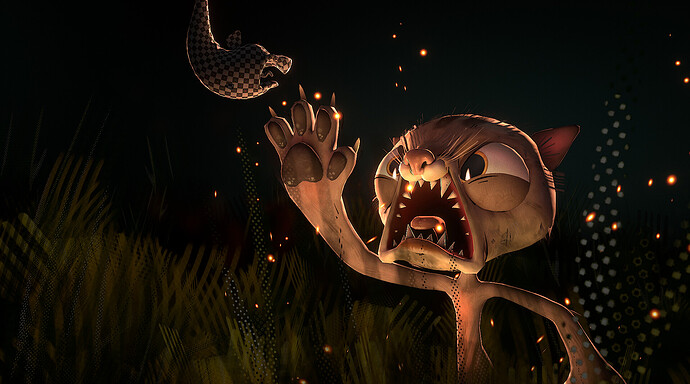 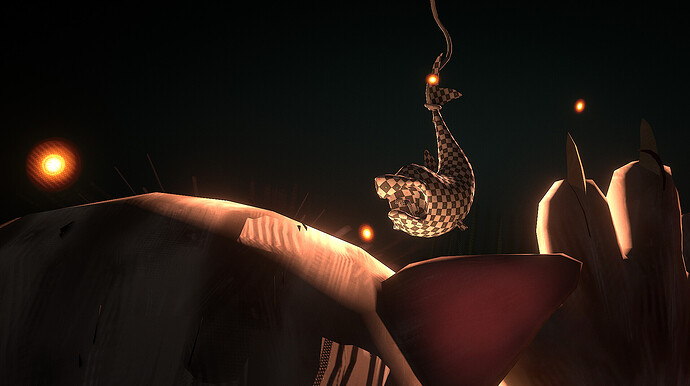 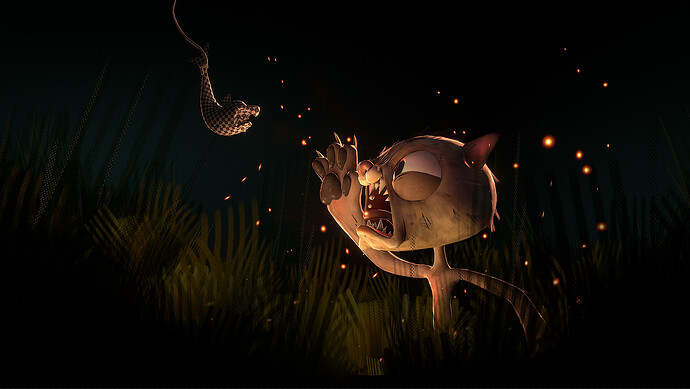 I’d love to see that turn around/anim, with some handheld camera shake! that would up the spookyness.

A bit of fire today. Lots of fiddling with geometry nodes since I’m such a noob.

What do you think? Too aggressive?

a bit aggressive but I would not remove it, just push it a bit back and maybe a little bit less intense.
Looking F** awesome anyway

Thanks! Will take care of it!

I’ve been having so much trouble lately finding time for working on this entry. But it has an upside!

Looking at it with fresh eyes after some days makes me feel like it’s worth it. This project is really starting to feel special to me.

I can’t share that much progress, I’ve just partially textured the body of the fish, but I’m on my way! 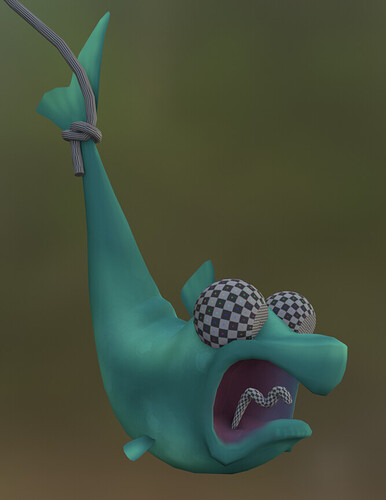 On the path to finishing!

The fish is now textured. Tomorrow I’ll bake and paint the light as well as bake the remaining textures. 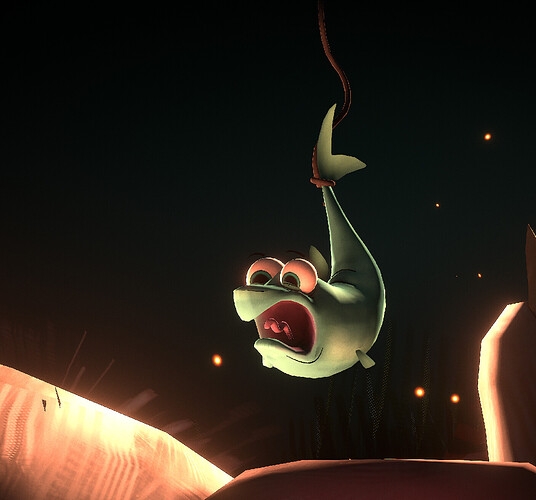 With this, all that will remain will be the fire and the animation.

Today, I’m glad to report that the project is quite there. I’ve baked all the textures and imported the scene to Sketchfab.

I don’t call this final, but should be mostly it. I wanted to do some animation but unless I change my mind in the next (few) days, it’ll stay as a still. I couldn’t make the fire quite work and I haven’t figured any better way to do it that doesn’t imply lots of rethinking and experimentation or 2D animation skills I don’t have.

I think it’s great, tho! I’ll check it this days to find mistakes or ideas to push it a bit more. 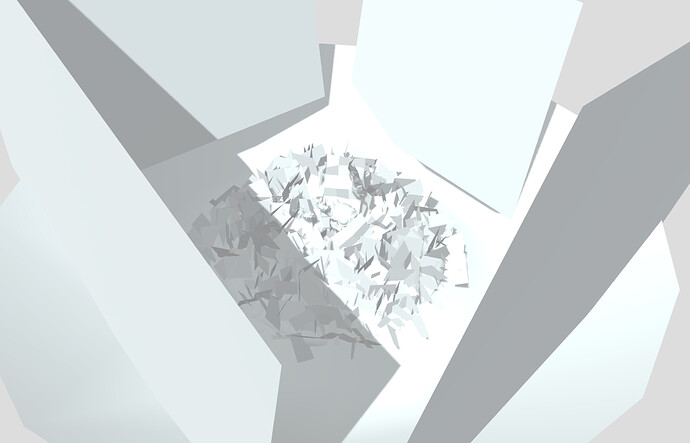 In terms of polycount, I’ll attempt to be extremely economical. I know Sketchfab can handle more than that, but I want it to perform at its best, so I’ll try to get the whole scene under 20k tris.

We made it under 20k tris!!! Miraculously close to the limit, the way I like it

Writing this words fills me with pride since this was so outside of my comfort zone. I have learned a lot, but I’ll write about that once I make the final post of this, now very dear to me, topic.

Good luck on this last days!

Open to any type of feedback

That’ super cool!
There’s something strange though, the default preview shows a very zoomed out version of your scene. That seems like a pity not to have it framed like you intended for the thumbnail.
Or does this only happen to me?
Love the style and expressions in your scene

Seen and already fixed, should work now. Thank you! I thought it was automatic hahahaha

If there’s any other feedback you might have, I’d love to hear it! Thank you so much!

Thank you so much!!

Today I’m still noting small fixes that need to be done in my scene.

Also, I’ve tried the Sketchfab Screenshot tool, since I wanted to make a wallpaper for my phone, and It’s great! Simply using Sketchfab as a render engine. 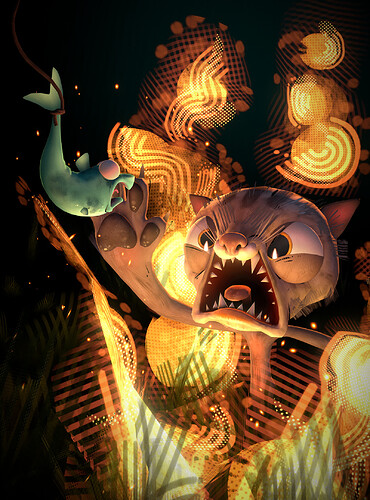 I’m so proud of how it looks!

It looks so good in the viewer! You handled the surrounding space impeccably. Incredible.

Thank you! Means a lot comming from you