A few spy gear photos for linking to sketchfab annotations: 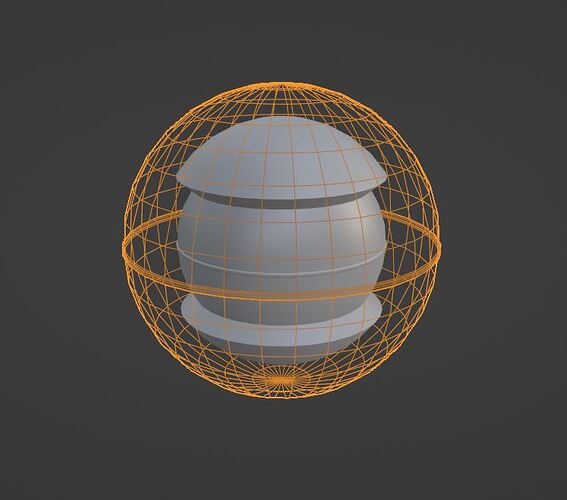 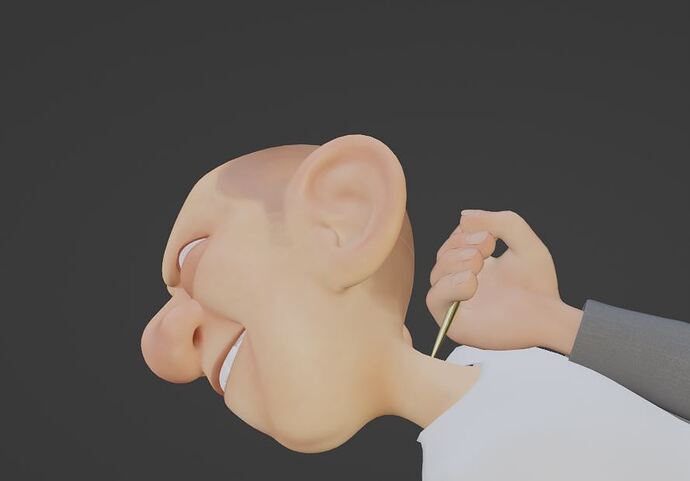 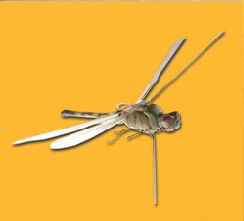 Boy did everything decide to go wrong at the 11th hour. Blender was crashing every which way and Sketchfab started miss handling textures. It was trying to combine similar materials (and always to critical detriment). I’m pretty sure it’s because I was nearing the 100 material mark, but I just didn’t have time to go back and consolidate. Luckily, I found a work around: for every material that just used a principled BSDF shader and no textures, I made a 5x5 texture image of that solid color and connected it to the base color, that way Sketchfab would see it as unique. in the end, pretty much everything came out okay.

Unfortunately, I had to remove the 007 painting because it is copyrighted material (Bartv comment on one of the Sketchfab uploads). I didn’t have the time to find a replacement. Hopefully bare walls doesn’t hurt my submission too much.

Overall I’m happy enough with how it turned out.

** The only element that remains broken is the opacity map for the ground outside. I was really proud of that touch so it’s really disappointing. I don’t know how to fix it. I changed nothing since it worked last. I think it’s because of the number of materials. So, if I can squeeze some time early tomorrow I MIGHT try to address the issue. But I still need to put all the cc0 attributions in the description tomorrow, so I’m not hopefully.

I would like to make a longer final post like @scopelma, but I’m currently frantically drawing a still life that is due tomorrow that I’m only now just starting due to above mentioned miscommunications. So I will just say good luck to everybody else and don’t forget to tag your submission (and attribute any cc0 content) so you’re considered by the judges. it’s been a lot of fun!

Oh well, life comes first! Congratulations to you for finishing your upload!

Your work strikes a chord that few did: humour. Love the objects you added and your notes, it was fun 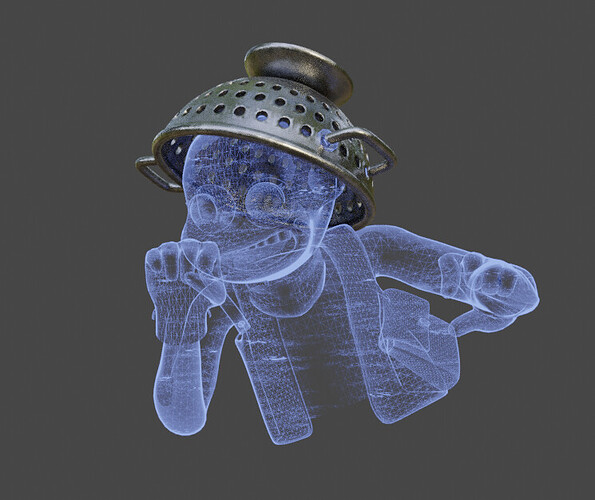 Awesome job! I love the theme, and all of the hidden easter eggs. I wish you luck!

Nice, good luck with that as well! 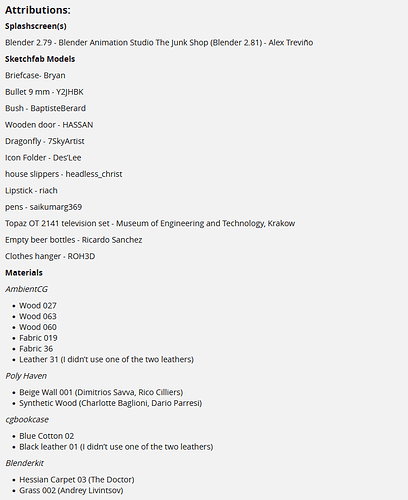 You see, I thought the challenge deadline was on Wednesday, not Thursday. I realized early yesterday morning at work. I had a whole extra day! So, after a few hours I spent yesterday evening (and maybe a bit of company time

) frantically modeling out the hidden space. Most critically, I spotted 2 .exr textures I had failed to replace with jpegs that freed up just enough space to cram in the last of what I wanted.

I’m proud of how the hidden space turned out: 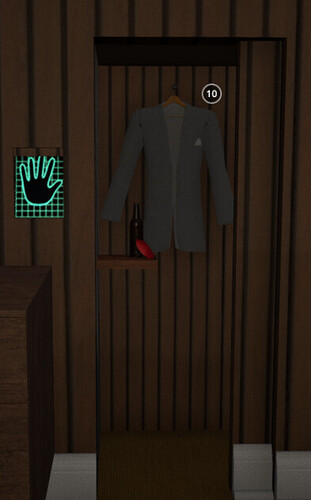 image392×629 39.9 KB
It came out to be more reserved that I intended, which seems to be a trend in this project. I’ve kept landing back at being more subdued than I shot for, BUT, personally, I think this specific addition effectively tied all of that subdued fun/humor into being greater than the sum of it’s parts. It all makes sense now. It’s not boring, it’s the point. Agent 327, after all, still strives to be a suave James Bond gentleman type. But then the person as he is is peppered throughout the scene and in his…leaping onto the bed in stripped pajamas.

On a technical note, I’m particularly proud of the hand scanner texture 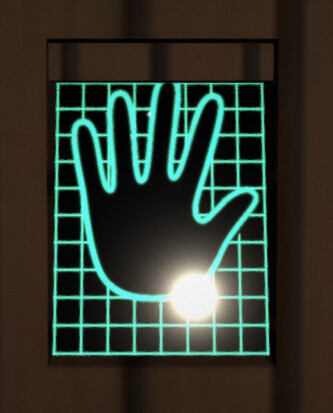 For a lot of you guys, creating this from scratch would probably be an easy afterthought. But this was a big moment for me. One of those times you have an idea you don’t KNOW you can do, but then it goes so smoothly and you’ve seen all the new bits about 3D you’ve been learning come together in a new way and you think, “dang, I’m better at this than I used to be”.

I created the grid in photoshop with this guide (the answer from David), and then I traced a hand on a second layer and filled it with black.

The beer bottles also conveys a lot of that dichotomy between what Agent 327 strives to be and what he is (in a wholesome way, we all exist like this). After all, it’s not a fancy whiskery set – it’s beer and cocktail umbrellas 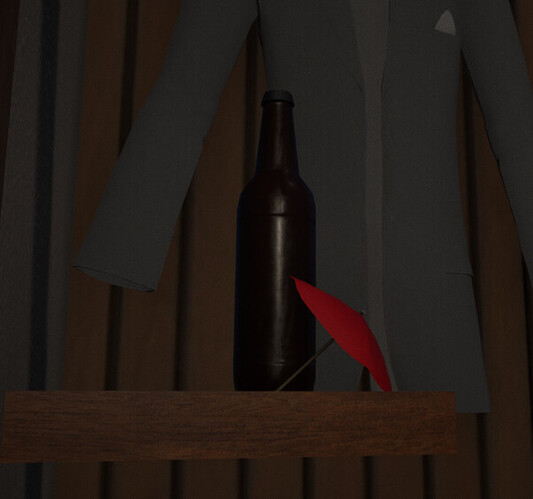 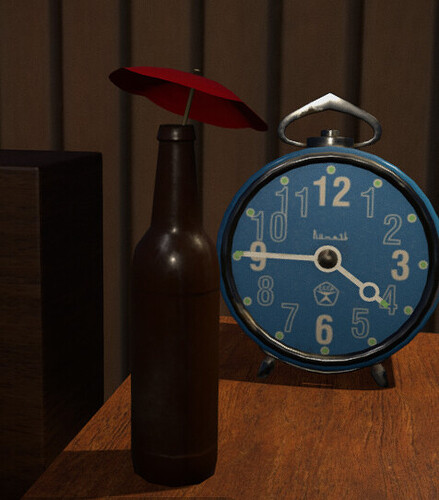 A few more changes were…

I was able to find a new image for the poster from wikicommons!

image1106×516 84.7 KB
Thanks to @Zorro_Weaver for pointing me to wikicommons and for the original idea to include Spy vs Spy. I saw you edited the suggestions about wikicommons out of your comment, but luckily I saw the notification on my phone before you did. I assume you edited that out because you felt I wouldn’t have time. Fair call still though lol. 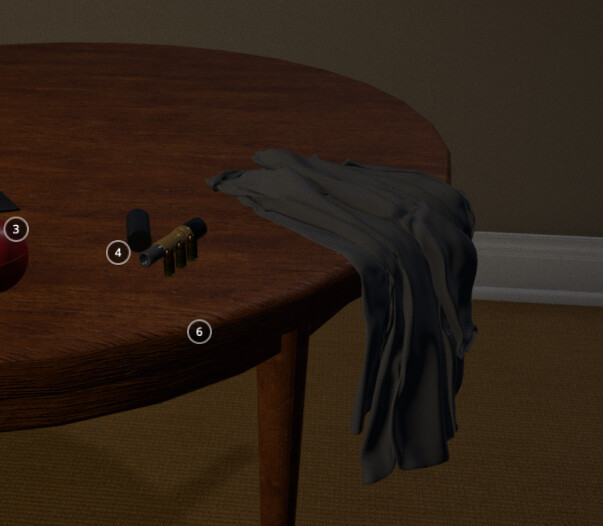 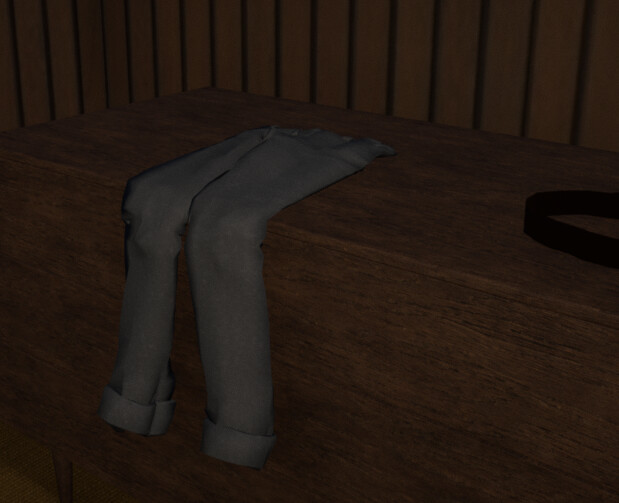 annnd they helped me figure out what was going on with the opacity map for the ground outside! 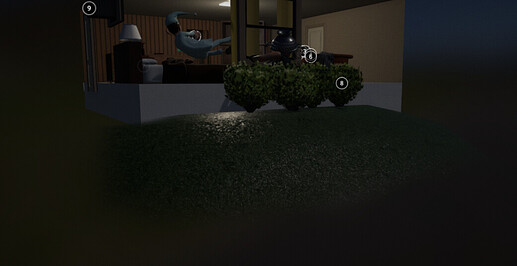 image1041×536 65.3 KB
Turns out, somewhere in the pipeline from blender>gltf export>sketchfab the UVs of the mesh were getting reoriented. So to fix it, I reoriented the opacity map file in photoshop until I got it right. It was a 180 degree rotation and a horizontal flip. Weird bug man.

Anyway, the forreal final version is in Sketchfab. I’m not touching it again!

Fun fact: the file size came in at 98.8 MB with a 100 MB maximum. Things got sweaty there for the last week or so.
Fun fact 2: I had so many cc0 attributions to make that they used up all of the description character limit on Sketchfab, so I had to screenshot it and upload it in the description as an image so I could type a actual description for my entry. I barely made it by the skin of my teeth in more ways than one!

I saw you edited the suggestions about wikicommons out of your comment, but luckily I saw the notification on my phone before you did.

Sorry about that! I posted it, but then I reconsidered it when I saw your post about not having enough time. I didn’t want to overwhelm you with stuff at the last minute. Glad you saw it when you needed it!

How did the still life turn out by the way?

Lastly (maybe), my description from sketchfab is relevant:

"Agent 327 leaps into bed after a long day at the barber shop not getting his hair cut (maybe singed)!

After rewatching Operation: Barbershop I found myself identifying with Agent 327 as someone with ADHD. Intentional or not, Agent 327 fits pretty well as an ADHD’er! Not only in his clumslyness, but his resilaince in the face of it. So, I leaned into that idea for this project. I wanted to convey this sense of living in some level of harmony with ADHD. His bedroom is a bit mesy, but it isn’t dirty. He’s misplaced some things, but he has 7 panic buttons strategically placed so one is always at arms length. And at the end of the day he’s a good agent…And he has a fan outside!

Living as a person with ADHD isn’t about conquering a disability – it is who you are. it’s about learning how to live in a world not built for you through a network of personalized adjustments and a lot of self-compassion."

I had this ADHD representation idea in the back of my mind throughout the project, but I was never sure if I would be able to pull that thread of the project together – mostly because of the number of objects it would require – so it never felt like the moment to present the idea. I’m especially happy that this aspect came together though! From the clothes scattered about to the objects strewn on the table and floor (though maybe a bit too neatly), the shoes and hairdryer haphardly in the corner, the misplaced Top Secret folder, I wanted to convey this energy of ADHD. And also through the juxtaposition of the hidden space and the beer bottles (as apposed to a more classic brown liquor set). Stepping back to that dichotomy between what you strive for and what you are, I think ADHD’er experience a special flavor of that dichotomy, again in bad but also good ways. he’ll never be quite as suave as James bond. But he gets to leap into his bed with a beer!

The placement of the clothing in the room is also intended to tella a little story of the nature of being an ADHD’er. He comes in, immediately steps out of his shoes, drops the the hairdryer, takes off his coat and partially unpacks his briefcase, gets distracted and wonders over to the dresser, takes off his pants, but then he wants a beer from his special stash – this was an especially intense day afterall, grabs it, forgets to close the hidden space back up, grabs the remote and leaps onto the bed! But at the same time, I didn’t want to make a big show of that aspect because I think ADHD gets enough of that in an unhelpful flatting kind of way. I didn’t want to make a statement, I wanted to create a scene that simply embodied it and all it’s depth and nuance (within the limitations of Sketchfab). That it is far more than “forgetful and distracted” it’s so much more in good and unfortunate ways. And I realize those traits are really all I’ve described above in words, but that is my point. It’s difficult to articulate the rest in words, if it’s possible at all. And so we have visual art!

Thank you to everyone who followed along with my submission and to those that contributed in the comments! I had a lot of fun seeing all the other submissions grow and change and become intimidating! Good luck to everyone.

I got all the objects done well enough, but not any backgrounds

. Luckily we ran over on time and I didn’t get to present for critiques. So, I’m going to work on them more and turn them back in for a late grade on Monday.

Thanks for sharing this final bit of background of your work. It gives a lot of meaning to your work, and it’s great to cast a final light on what you created.

Best of luck with the challenge, it’s been really nice to follow your progress over the past few weeks. And good luck with the backgrounds too

Really enjoyed this room and had a big laugh when discovering the secret papers … thought he is a real Donald our agent. But he do not deserve that kind of insult. So, sorry for that.

Thank you! That means a lot!