Okay, is it just me or are there just very few “complete projects” tutorials for blender? I know there’s the introduction to character animation out there, but then you have your character with rig, without any idea how to do uv-textures, or an environment. Now I thought @ndy’s creature factory was a close one untill I read it was more of a “the making of”. I know this would be an amazingly massive project to do, but beginners often stop blendering because their first 10 renders are just cubes etc. and much of the tutorials aren’t as beginner friendly as they had hoped. in my opinion, there should be a tutorial on introduction to the gui, while modelling, one which covers lighting, texturing and rendering, written in a beginnerfriendly fashion.

Writing this since I see these tutorials alot on 3dtotal.com even though they’re not as beginnerfriendly either, but they are very complete.

Now I know what reactions I will get: well write one yourself then, yes, I would definately love to do that, however, modelling… is okay, but my lighting and texturing skills are way too bad to begin such a project. But, if I could get some help on creating such a thing, I think it’d work great for new users, which benefits the community.

I’ve learned that once you understand Blender’s interface and workflow, you can take any 3D tutorial and do it using Blender.

The Essential Blender covers all that very well. The interface, modeling, rigging, animating, overview of modifiers, texturing, UV unwrapping, lighting, rendering, compositing. And so on and so forth.

It helped me a lot, I definitely recommend it.

that’s all good,but I mean: a walkthrough for an entire project, not just a character, a cofeestain or whatever, just, a complete project, from begin to end, explained like BSoD introduction to character modelling/animation, a tut that takes the reader through e.g. the creation of a street, a building a character, props, texturing them, lighting them, compositing, rendering and postpro. to eventually render either a still or a short animation.

I mean, I think I could do like… some sort of medieval townsight or something, but I wonder if anyone would need it, or would want to read it.

Such a tutorial would take months to write if it were to be any good.
Buy Harkyman’s book : 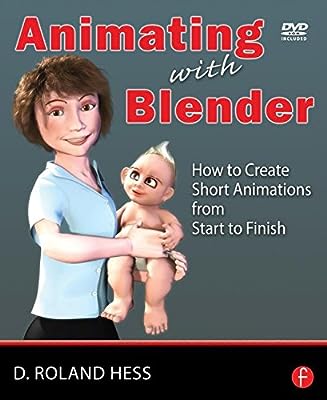 Animating with Blender: Creating Short Animations from Start to Finish

Blender has become one of the most popular 3D and animation tools on the market, with over 2 million users, and it is free! Animating with Blender is the definitive resource for creating short animati ...

essential blender for basics, Harkyman’s book for production, and the mancandy faq/ intro to character animation book for rigging should provide you with a pretty extensive library. You could say one book for all this would be great, but its pretty important to see different methods of doing things so you can find a workflow conducive to your personal tastes. I haven’t seen Andy’s DVD but I’m sure it would be a nice addition also.

I didn’t mean one thing for everything, just something to show a beginner a lot about how blender works and give them something with an endresult of which they are truly proud. I know when I just begun, I made something really messy out of the intro to character animation and even though I was proud, I wanted to continue reading to put it in an environment, I wanted a reasonably impressive render for a beginner, of which someone of an intermediate level would say: wow, you did good. Not just: it’s okay for a beginner, but (critique: fill in). Even though I know you can’t go without critique, critique is good. My main question would be: would people read it, follow it and be interested in such a tutorial.cause I’m planning on writing one, an extensive one… but I won’t start untill I know for a fact that it’ll be used and stuff.

It depends on the kind of tutorial you are thinking? What theme? Which demographic will you be targeting? It all depends? If you’re tutorial would be clear and easy to follow, someone would always find a use for it.