This is the thread for the entire process of creation of my entry to the ‘Make a Splash in Amsterdam’ Challenge 2022.

Note: The thread contains minor spoilers for Attack on Titan. 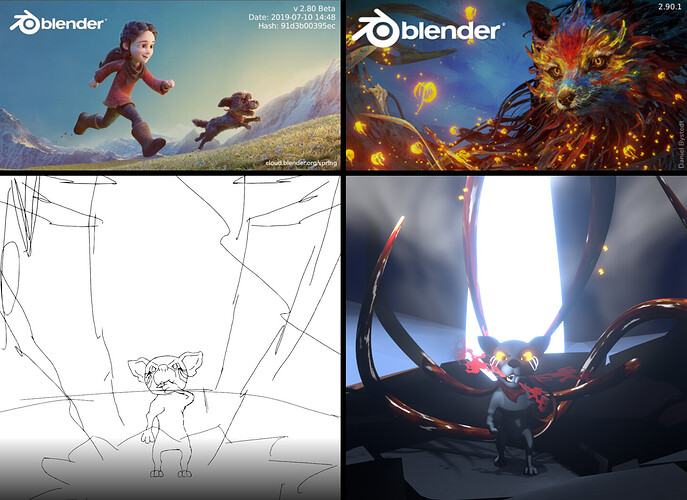 Tl;dr of the concept:

This model is based on the anime ‘Attack on Titan’, and uses elements from the splash screens of Blender 2.80 and 2.90. Autumn, the dog, is biting his hand and is mid-transformation, into a titan which is the Fox.

I am an engineering student who wants to get into CGI, more specifically to create NPR (non-photorealistic) artwork and finally get into producing anime. I started when Spring had just come out and used 2.8, so that’s where I began to look for ideas.

I am very much into anime, and one of my favorite series is ‘Attack on Titan’, which is a show about humans fighting and turning into giant man eating monsters.
So in my scene, Autumn will be transforming into the giant fox from 2.9’s splash screen.

Here is a set of references I gathered: 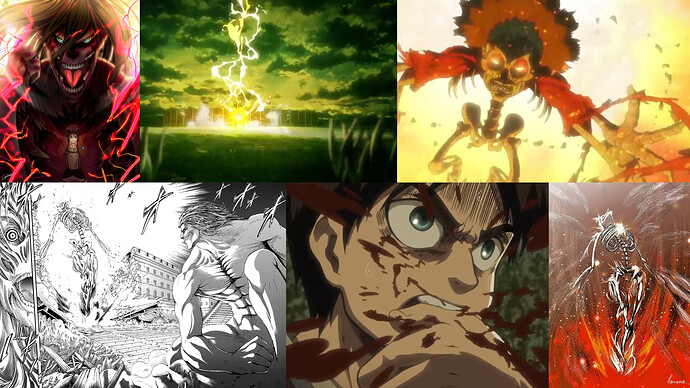 I then proceeded to create a basic sketch concept using grease pencil:

I downloaded the files from Blender cloud and proceeded to clean them up and only copy what I want. It was interesting to see the thousands of modifiers and drivers that were used on Autumn’s rig, which I had to delete.

I did some basic modelling to add elements to the scene, here is a WIP: 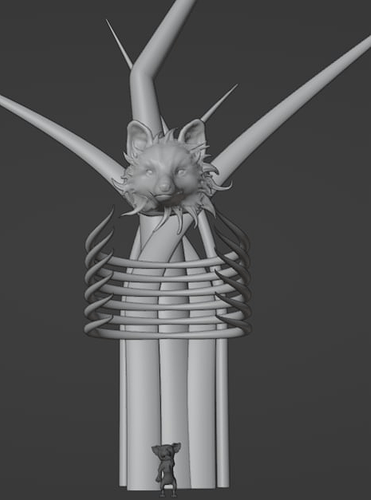 The ribs were simple curves with an array modifier, and so was the ‘paths’ tree in the background.

‘Paths’ is a dimension where titans are created, here is a reference photo: 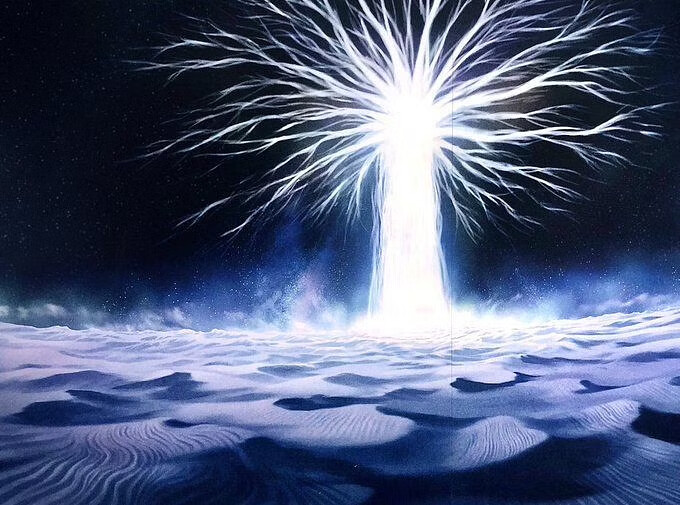 I then had to proceed with making the model look more ‘life-like’ and less computer-generated. I started with editing the ribs to make them look more organic, and then made some small changes to the tree as well. 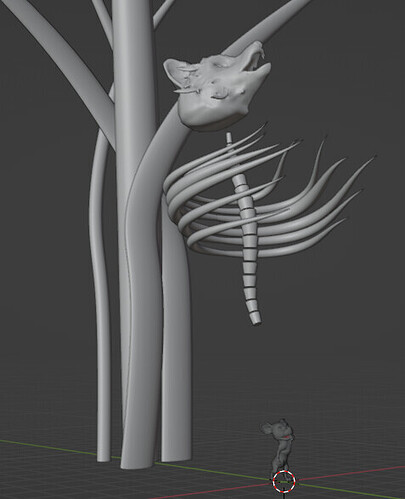 Also added a spine, which is a bunch of cylinders with an array and curve modifier. To add more to the effect I added some flesh tendrils going up from Autumn to the Fox to sell the transformation even more.

And to completely sell that this was a titan transformation, I cut the head of the fox and added a skull inside (model by mbititci on Sketchfab).

Next, I wanted to fix the fact that the entire scene seemed to be happening in the middle of nowhere, so I needed something on the ground. I was about to start with a ground plain with a displacement modifier to make it look like sand, but I stopped myself. There can be something more on the ground!

I modeled a basic blender logo and broke it up using the cell-fracture add-on. I think it makes sense to include the logo because this competition is also in spirit of celebrating blender itself. 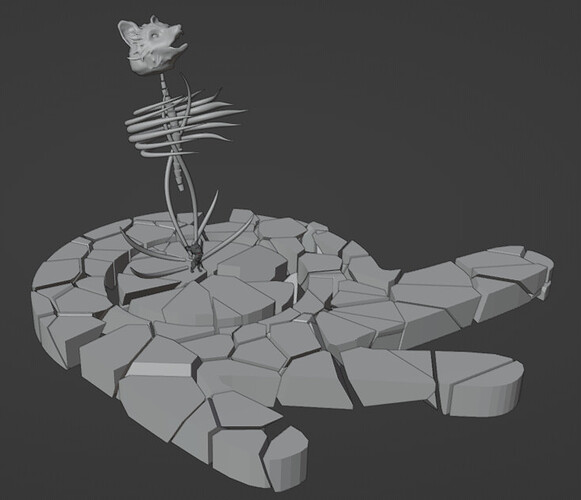 After that, let’s talk about effects. I animated some bolts of lightnings using shape keys.

On top of that, I thought of adding a ring of smoke around Autumn. To do that effectively in Sketchfab, I thought using smoke cards would be a good, and I followed a bit from this tutorial : https://www.youtube.com/watch?v=d20gv2zml88&t=2s&ab_channel=IanLetarte

I rendered a puff of smoke and added it as a texture on a hemisphere around Autumn, and the result in Blender looked fantastic.

So my fantastic result was not supported in Sketchfab. That was a bummer.

However, that was when I decided I was 100% going to use animated textures in my models and figure something out. I did a test where I duplicated a bunch of hemispheres and when they were not in use they would be scaled down, so you could only see one texture at a time. Unfortunately due to the interpolation in Sketchfab, the scaling down was visible in Blender, and the result was a very jittery smoke.

A bit demoralized as my animated textures went up in smoke, I decided to focus on other things at the moment.

I placed the entire Blender logo on a curved ground using a rigid body simulation on the individual pieces. The end result looked very cool. 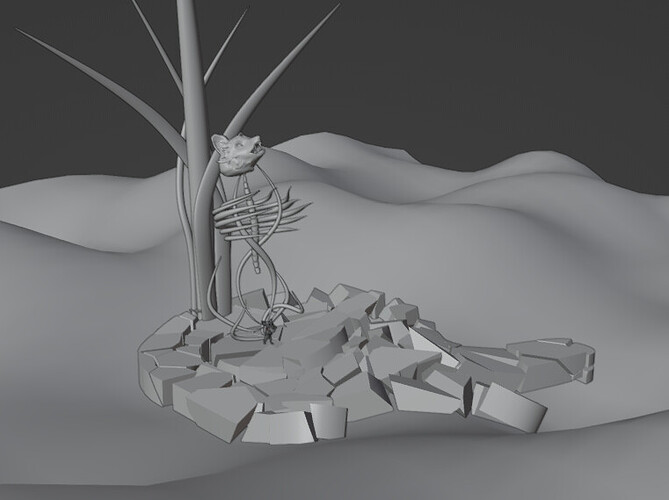 I was pretty happy with this model, and thus I began texturing. I wanted to follow a simple color scheme, so I have majorly used colors which are complementary shades of blue and orange (Blender colors), with the majority of the scene being blue.

I proceeded with procedurally texturing and lighting, which absolutely brought the scene to life. 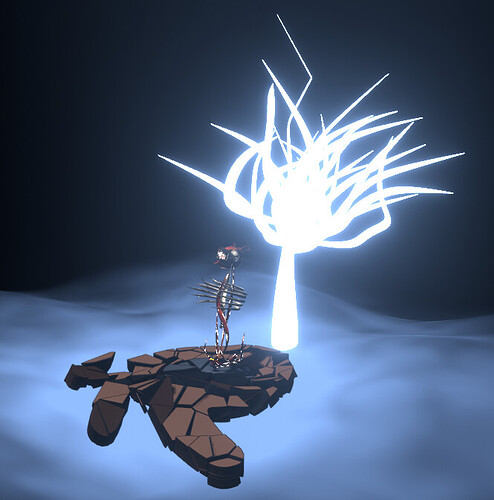 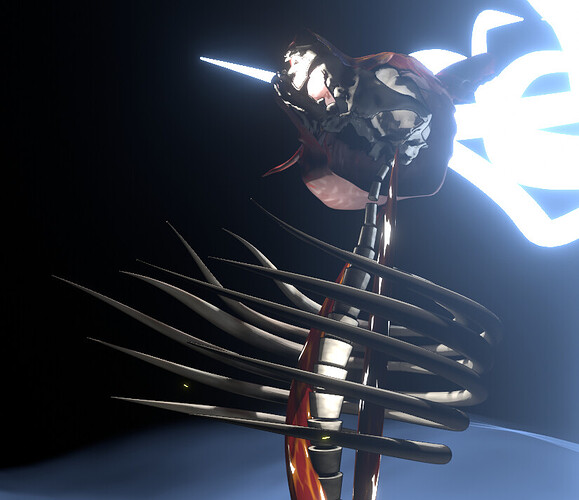 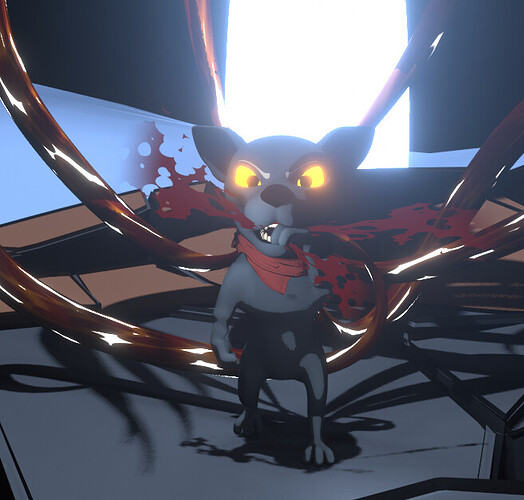 I think the blood splatters were a great addition, big thanks to Kristof Dedene for this nice tutorial : https://www.youtube.com/watch?v=FTw6tYwMsNo&t=584s&ab_channel=KristofDedene

I believe texturing to be one of my strong suits, and I have done many stylized projects before, but the final requirement was to create a PBR shaded scene, and I had no idea how to take my stylization there. It was a huge challenge.

The biggest challenge was baking textures. Baking in Blender is only supported in Cycles, and while I wouldn’t mind switching over from Eevee, the problem was that I was using the ‘Shader-to-RGB’ node, which is not supported in Cycles. I took some time to figure out a workaround.

The workaround was quite simple after I figured it out, basically if you have the following node setup for your stylized shader: 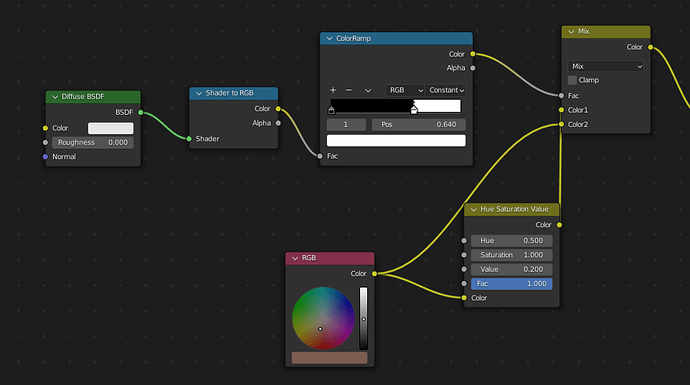 Then the solution is to bake the input to the ‘Shader-to-RGB’ node, which in this case was a simple diffuse shader, and then use that baked input as the RGB data and bake your final texture. 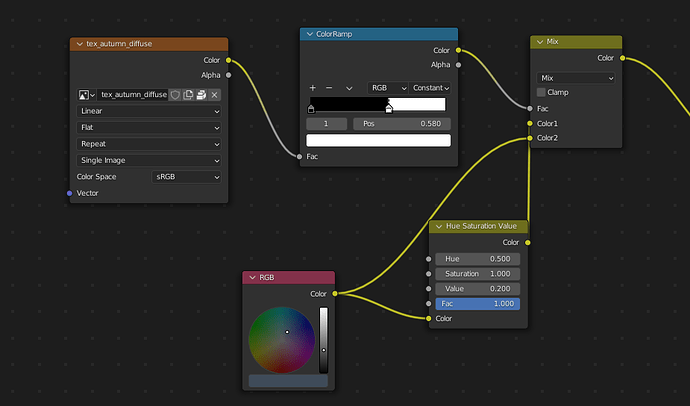 The Return of Animated Textures

I really thought that the animated tendrils would look cool if it felt like they were rising, and having just the lightning animated felt out of place for the scene. I decided to try animating textures once again.

Laying down in a break, I had a eureka moment when I realized I could just set the interpolation of the shrinking to constant, and that would solve the problem. I tried this with the tendrils as a test:

But I was absolutely set on doing this animation.

And then, another eureka moment struck!

What if the scaling down was so subtle that it simply wasn’t visible?

This could be done, if one tendril was exactly inside the other tendril!

So that’s what I did. 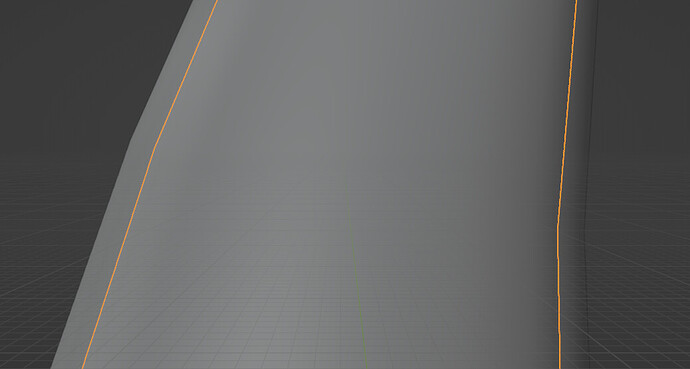 I wish it was as simple as scaling down the entire thing by 0.95, but it was more like selecting nearly each edge loop separately and scaling it down and fitting inside the bigger one.

It was a grueling process. But the result?

To wrap it all up, I wanted to let theme set into the scene completely. For that, I decided every element from both splash screens will be included in the scene.

Thus, the glowing flowers were added.

I reimagined a rather grim alter-ego of Spring, who I named Winter.

Winter is an incarnation of Ymir, a cursed character from the story of AoT who stays in the paths forever and is responsible for building the titans whenever they are summoned. 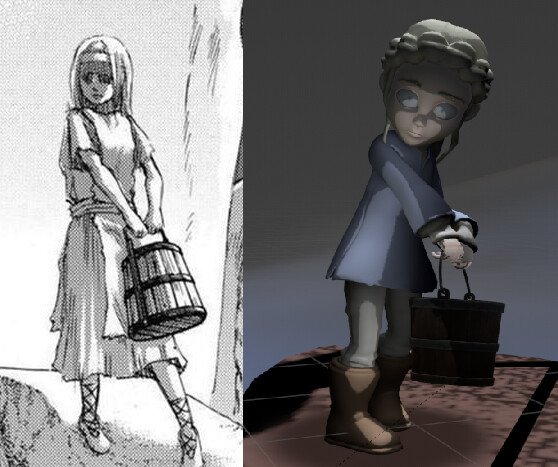 Thematically, she is a rather sorry character, so I added her as a detail on one of the corners of the cracked Blender logo.

Finally, I adjusted the framerate and added line-art wherever I thought necessary, which helped me sell the Anime look.

And thus, the scene was complete!

The Revenge of Animated Textures

You may skip this section as what I tried to achieve here eventually failed and was scrapped, but I am adding it since I put in lots of time and effort into this.

Proud of the tendrils that I had made, I convinced myself that I could animate any texture if I put my mind into it.

So I went back and explored the smoke. This time I gave it a different form than before, a giant plane of smoke rising from the skeleton of the titan. It looked ominous as is, but it would look so much better if the smoke was rising up.

I started baking the smoke textures frame by frame, as if it was routine by now. However, halfway through, I realized something.

Even if I were to scale the mesh very slightly, there is nothing to hide inside this time, the entire mesh was a subdivided plane.

Not only that, but also if there was a place to hide it, it wouldn’t work since half of the smoke texture was transparent.

Doesn’t mean that I didn’t try it, but eventually it ended up in a failure.

There is another great tutorial by Kristof Dedene on how to create anime smoke effects: https://www.youtube.com/watch?v=eL6O3qN-d4E&t=246s&ab_channel=KristofDedene

It basically uses a subdivided icosphere with displacement modifiers. Since I had already used lightning parented to empties for animation, I thought parenting the displacement to another empty and animating the empty would work. The result in Blender made me excited:

However, that didn’t work on Sketchfab

This is a bit tough to explain and I haven’t saved the files/videos to give a good demonstration so I will keep it short.

Basically, think applying the smoke texture on a conveyor belt and then turning the belt so that it looks like it’s rising up. “That would be pretty cool” thought I.

But as I sat down and tried to animate this on my smoke plane, I realized it was extremely difficult. So I added a cylinder and rotated it in several shape keys, and then applied a lattice modifier to deform it so that it looked like natural smoke.

I contemplated this a bit, do I want the form of the smoke more or the animation, and I eventually settled on the form, since the smoke should look convincing and stylized. And thus, the conveyor belt was also scrapped.

Huge props and thanks to all the organizers and participants of the event, I am looking forward to the results and more challenges.

Until then, keep Blendering!