The big texture is there. Gonna be re-mapping objects onto this new one now.
The sizes are appalling. In 8k PNG, the 6 textures take 250MB 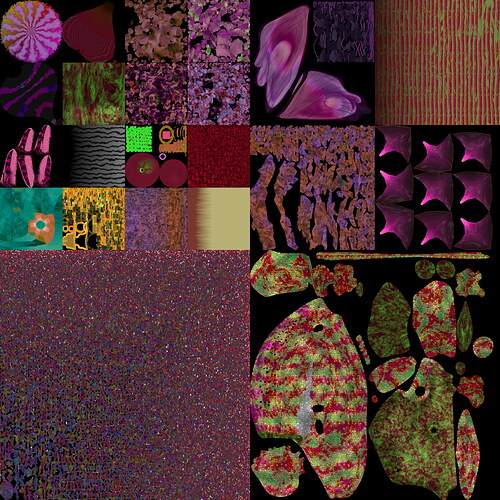 Everything remapped, there’s a single material for the whole scene.

there’s not much to show.
Actually, I still have 2 materials which I can’t get rid of, even though no mesh uses them. Anyone has an idea where else materials can be referenced?
I had to fix some UV mapping and baking issues.
The fun tip here is that I stopped rebaking and work directly on the textures instead. For example, I had a normal map baked the wrong way. I selected all by color and inverted and voila, no need for reprojection (it’s not super clean though).
I think I still have the courage to rig the little guy, or at least to pose him in a slightly more expressive position and fix the hands and feet once and for all.
Them it’s onto sketchfab. I watched and read most of the documentation, and I have kept my scene very simple, and I think it will be OK.
Oh yeah, also: 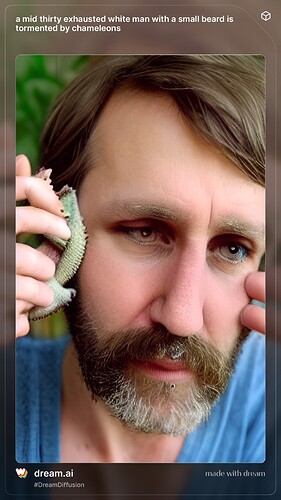 Rigging today. Not rigging for animation, that would be far too ambitious, but rigging for posing. The legs needed more expression in particular.
I started with a very simple rig 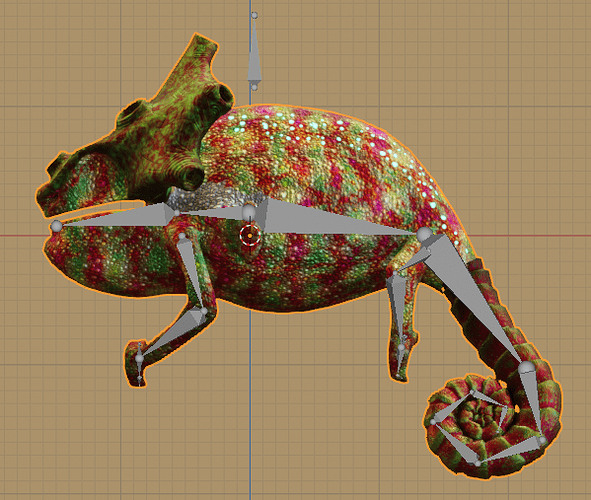 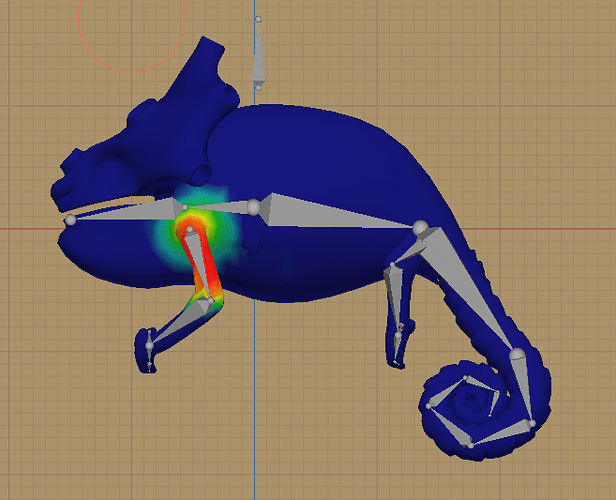 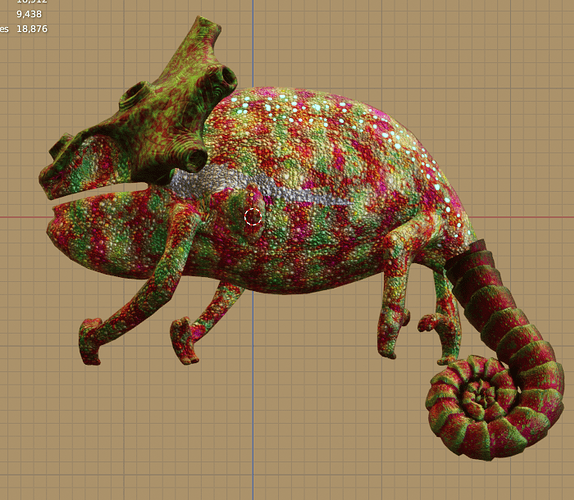 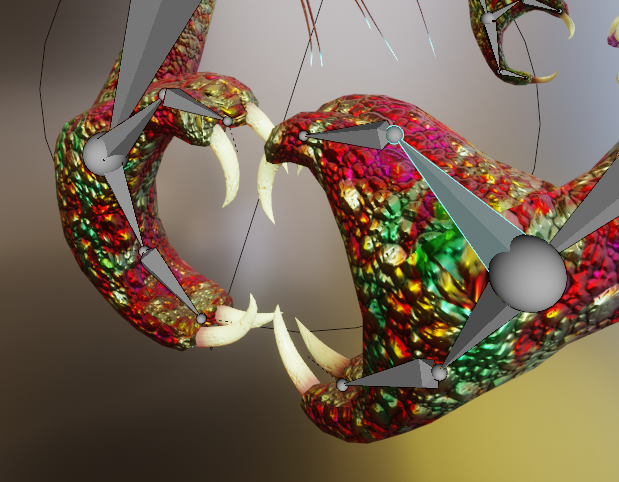 And now he holds tight! 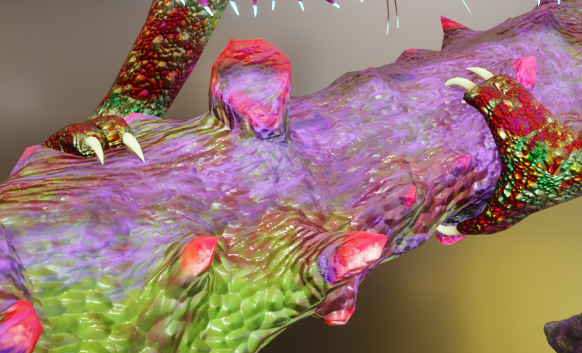 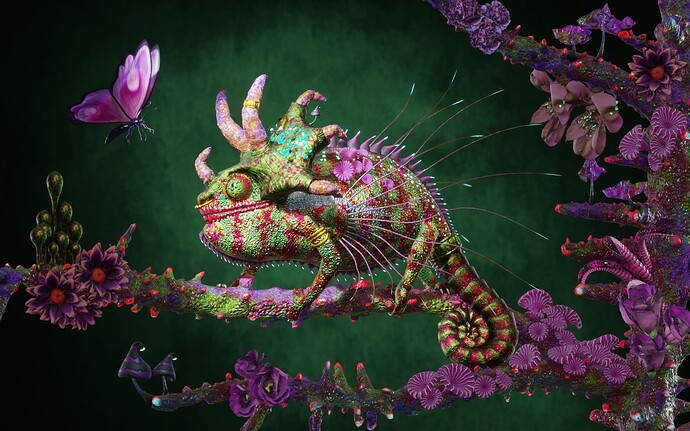 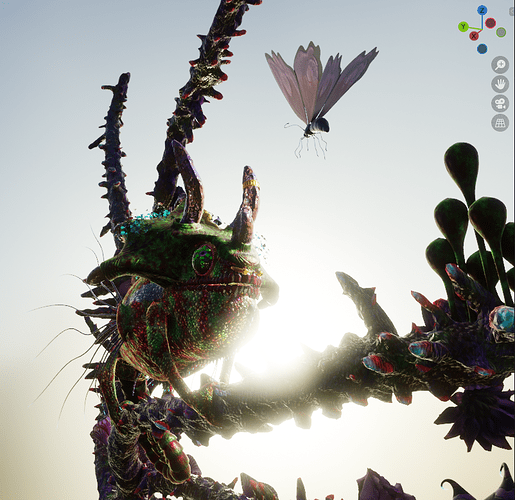 I’m exporting to sketchfab, it goes reasonnably well, but the GLB export seems to mirror all my UV’s. I don’t seem to find a similar bug easily. Anyone has a clue why this would happen? 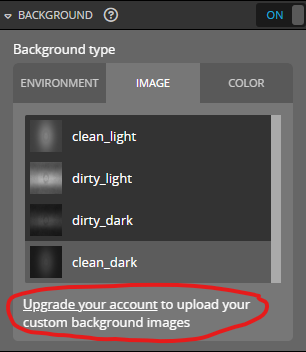 Work in progress, it’s not going too bad. I’ll need to rework the lighting, but overall everything imports as expected. 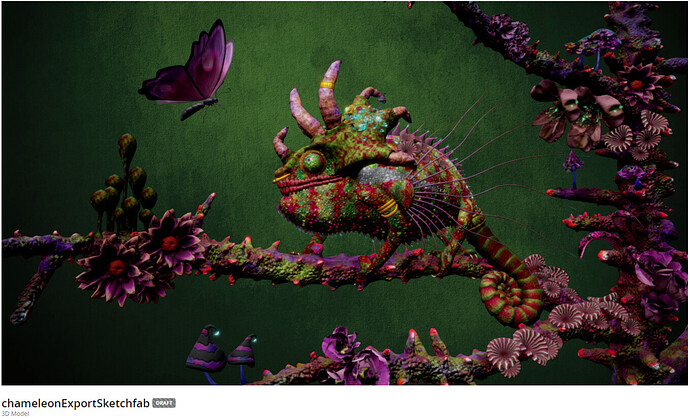 For the 2 issues mentioned above:

EDIT: Further tuning on lighting and camera setup. I updated the top post. 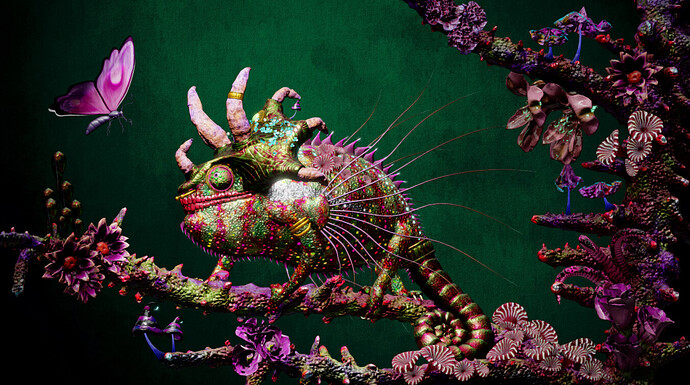 I published the model today. It is possible that I will rework it, as I’m contemplating adding some volumetric effects. Not sure though.
To wrap up this WIP thread, I thought about sharing the Sketchfab import process.

After watching the videos on the editor, I decided it was powerful and friendly enough to use it extensively?
I’ll go tab by tab

I chose the PBR workflow obviously.
I set the camera to the lowest possible field of view, so the chameleon and the decor nicely fills the frame. 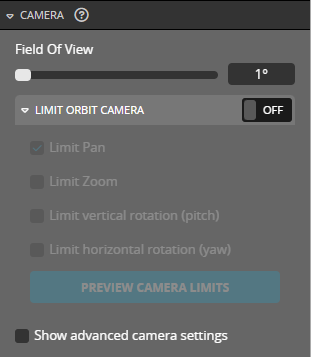 I had to upload my own background, so I subscribed to Sketchfab pro and uploaded my background. 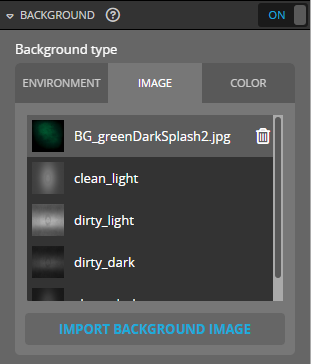 Just like in Blender, I used both direct lights and an HDRI.
I positioned the spot as it was in Blender and most of the same options were available. That was an easy setup. I deactivated 1 of the 3 lamps present and used the last one to add some highlights 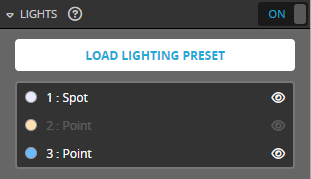 I used the studio HDRI of Sketchfab. It seems inferior to the one I use from Polyhaven, but I thought that the differences were minor and I did not want to burden the model with yet a new texture to download.
I decreased the power of the HDRI until I was happy with the contrast subject VS background. 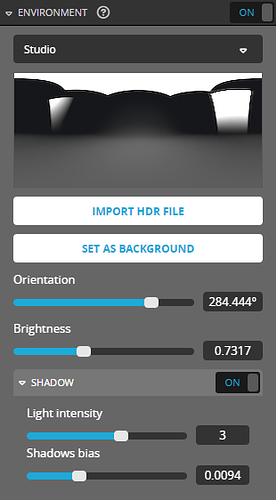 Materials
I converted all my textures to 4K. I used JPG only for the diffuse. The metallic and emission maps are so scarce that their sizes were very acceptable, even in 4K PNG.
I found that the roughness and the emission seem to render differently than Eevee, hence I had to slightly tweak the sliders.
Overall, I have used 6 maps: diffuse, metallic, roughness, normal, emission and subsurface 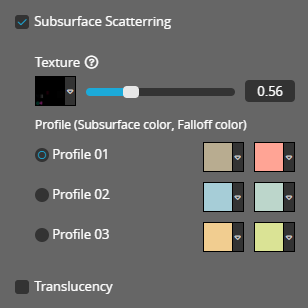 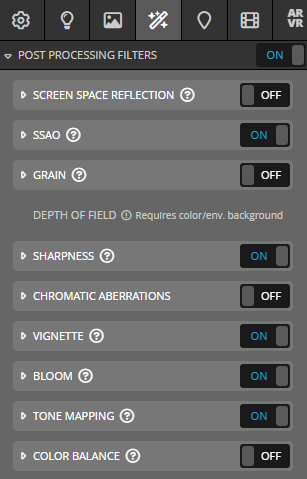 I found the most important setting to be the tone mapping. As Blender uses filmic by default, swapping to filmic tone mapping really helped bringing the image closer to what Eevee could show.
I used very subtle settings on Bloom and sharpness. I wanted some bloom, yet it could blur the whole scene very quickly, which was undesirable. I hope to have achieved a good balance. The model is sharp, yet it has a bit of this magic glowiness.

And that’s it! I saved the image with a similar angle as Blender and voilà.

NB: I might still change the entry slightly, please consider it final only at the deadline time

Looks very good! If I can add a bit of feedback, take it or not, is that you have changed the field of view to something very small (orthographic, even?), and the lack of perspective, to me, feels a bit disorienting. Again, to me. This disorienting feeling might be cool if that’s what you’re going for.

Thanks! I usually go with very low FoV, even in Blender, but I see what you mean and now I notice it

This is looking so good! Since he’s a little guy, what about adding depth of field in sketchfab for the macro vibe? Especially when you rotate around to so the tree is in the foreground, it’s be good to have it blur then

Thanks! Very true, but sketchfab does not support DoF with the fixed background

Just a noob admiring the work, absolutely fantastic choice of colors and composition! Good luck in the competition, although I don’t think you’ll need any

Thanks, these are very kind words, they feel comforting to me as an artist

The other day, after seeing your post, I meant to congratulate myself with you for finishing the upload, but I think that somehow that got lost in time.

The gist of it, though, is: congratulations for finishing this amazing work! I really love how strong and personal your style is and how you brought this to your project. It’s beautiful to see! Best of luck with the challenge

Thanks a lot! I wish we all meet in Amsterdam. I’ll be there anyways (not saying this too loud, I’d rather that the trip is sponsored

)
I see there are many entries worthy of a prize IMHO, I would not like to be a judge

Whatever the results, let’s grab a drink in October!
It’s funny how the challenge sprouted a micro community, it was fun to progress alongside.

Whatever the results, let’s grab a drink in October!
It’s funny how the challenge sprouted a micro community, it was fun to progress alongside.

That would be great! Let’s see how it goes

It was definitely really fun, I loved the vibe of the challenge. Encouraging the WIP posts created a sense of parallel progress which was both stimulating and artistically interesting!