Here’s a completely new version of the hephaestus’ rear hull, built from scratch. I hope people like it more than the old one.

It’s a very early stage, no detail yet. I hope people like it better. Haven’t fisnshed the front, deflector/scanner section or the rear shuttlebay section. Not sure how to finish either yet. 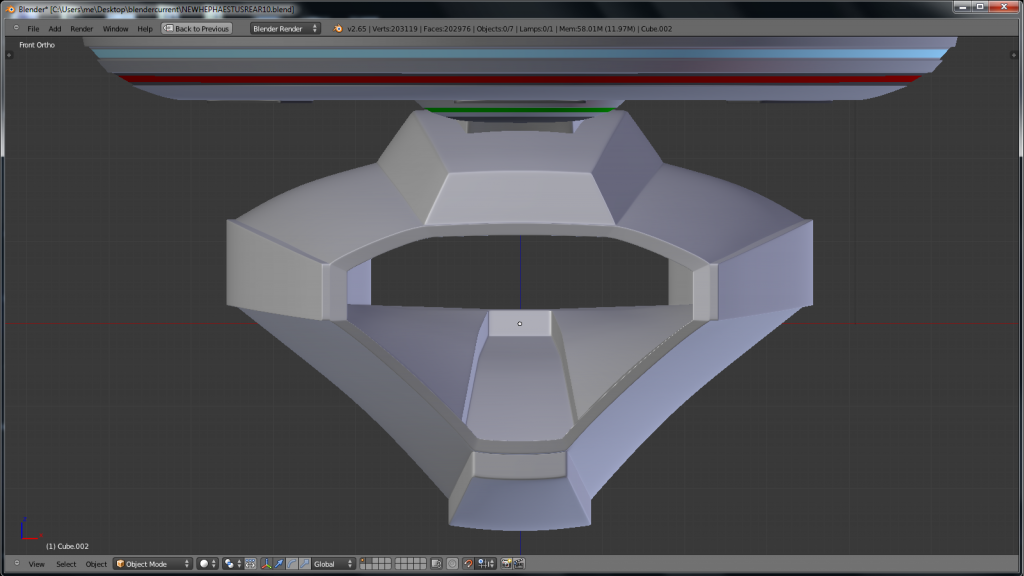 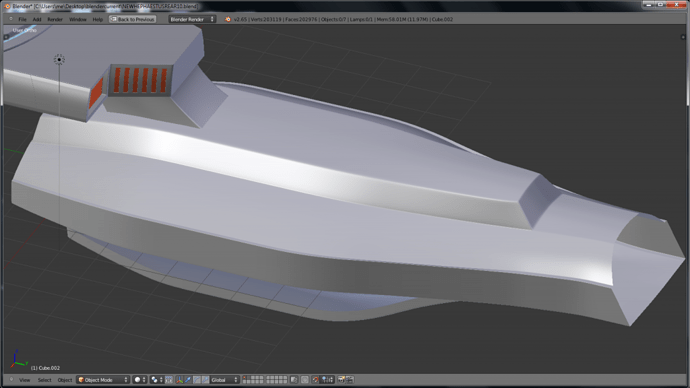 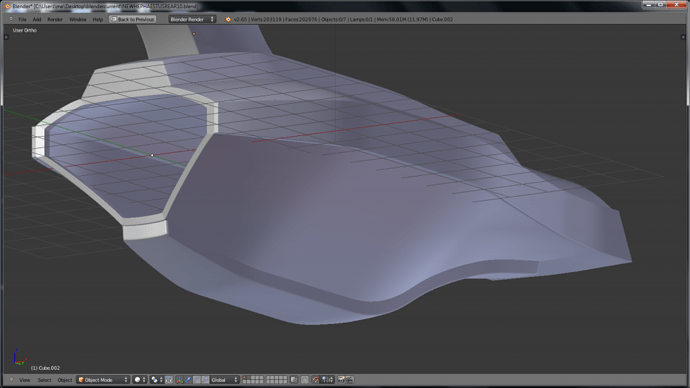 Other views of the new rear hull.

I like it. Due to the low amount of detail it’s hard to give substructive criticism, but i’m certainly waiting to see the finished thing

I’m importing parts from earlier versions of the ship, like the saucer and engines, and continuing to add parts and details like the torpedo tubes and sensor ring around the rim of the dish.

I also had me ‘blender moment’ when I was looking at the pics here and realized I’d created something unique and that I regarded as having a certain beauty, and that it was original to me. The blender moment is when you relize you can create something worthwhile in blender because you’ve learned to use blender well enough and had some creative ability. 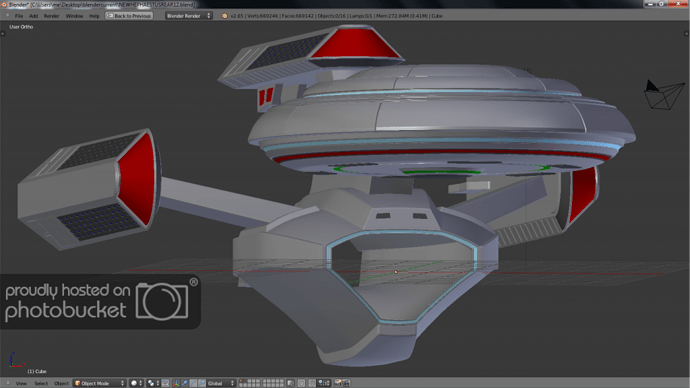 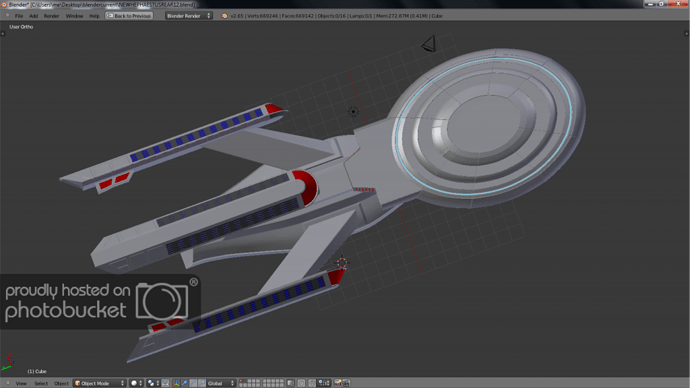 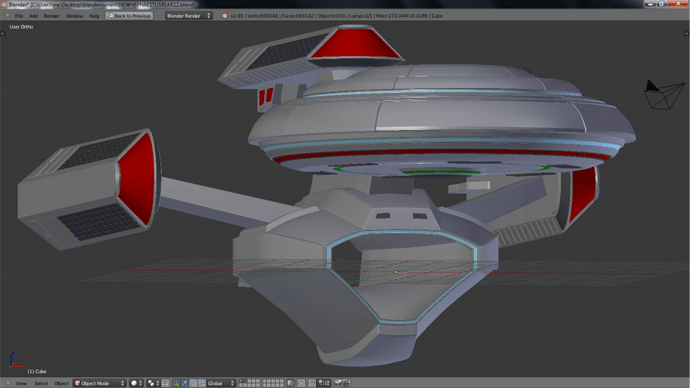 BTW, I was curious how the new rear hyull would appeal t the people who’d said my earlier versions were too blocky. I think this one is very streamlined and is related to trek tech while still being radically different in some ways.

I’ve tweaked the hull a little, changing edge loops, adding some edge splits and other minor fixed. I also added the two bits ahead of the pylon bases. Normally I don’t add stuff unless I know what it does or is supposed to do and avoid adding stuff that ‘just looks cool’ but something just compelled me to add these bits even tho I have no idea what they are for. 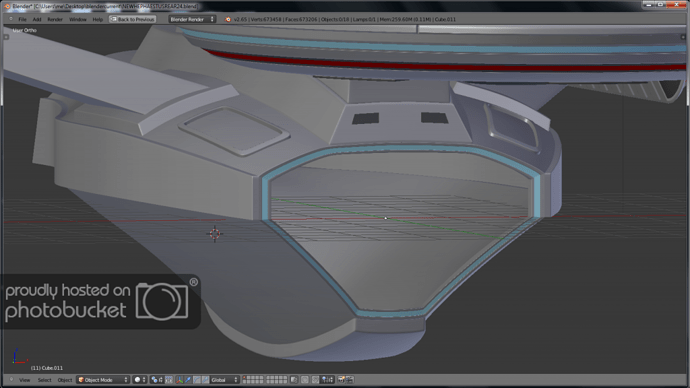 I will likey rip out the torpedo tubes above the sensors array and redo them with rounded rims like these now that I know how to do it. I’d also like to thank chris kuhn for his ebook that helped me so much.

Build Your Own Rocket Bike: Sci-Fi Modeling in Blender

This is a great help for people interested in learning blender modelling and I can’t recommend it enough. So far it’s the ONLY ebook I’ve ever bought. 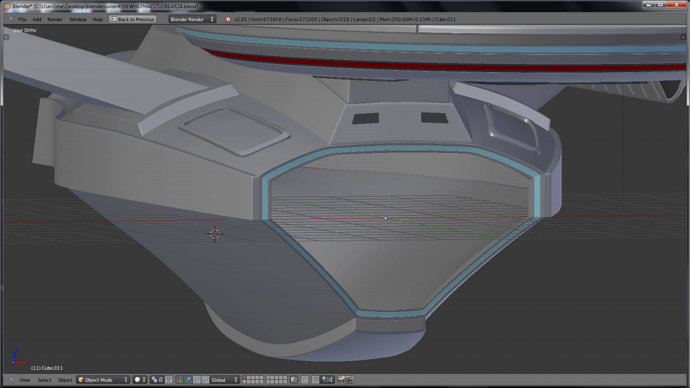 Whoa, is this an Enterprise ship? If so it’s my favorite so far. Nice modeling, I like the simple detail you’ve put into it already. Keep up the good work!

Uh, well, heh heh, it’s a starship in the trek universe but not an enterprise, or even a fed ship. It’s a fanfic piece of mine about a person who, thru a series of strange disasters, ended up with a tremendous amount of technical and engineering skills left in his mind by 3 dead vulcans and who was subsequently exiled from his homeworld, and began designing the ship for the hell of it while on the enterprise D.

Later the leaders of his homeworld threatened his family if he didn’t help them do an intolerable act, so he loaded up a very powerful AI system with the designs for the ship, called “Hephaestus”, hacked enterprises mainframe computer for every bit of data on fed ship technology it had, gave it some replicators and used a shuttle to slingshot it back in time over a century into a resource rich area. The AI started gathering resources, used a Von Neuman process to create more and more autonomous units to mine the area, converted a hollowed out asteroid into a construction bay, built the hephaestus over a decade and then brought the ship back to him via another time warp.

So it is based on and influenced by fed tech and design, but not a fed ship per se’.

Latest update, had to redo the engine pylon mounts and the pylons as the only way to keep the engines in the current position, new mounts and pylons are shown here.

Minor issues, I redid the torpedo tubes and added the side mounted multispectral sensor array to the lower side.

Still dithering on the main array and the rear section. 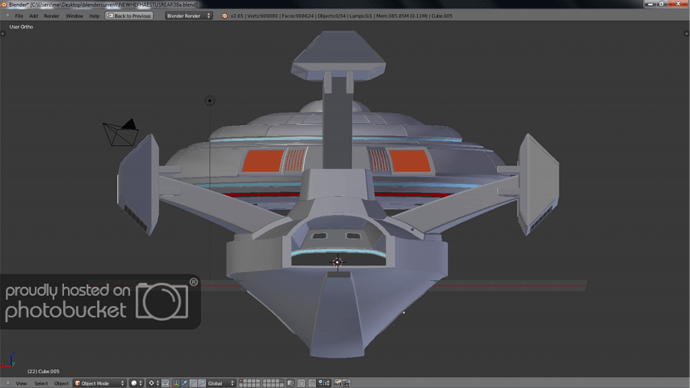 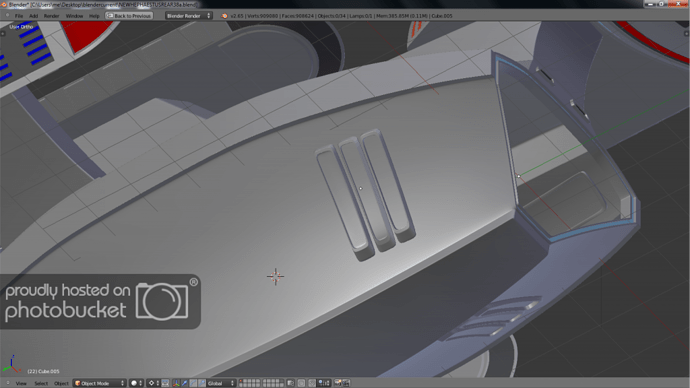 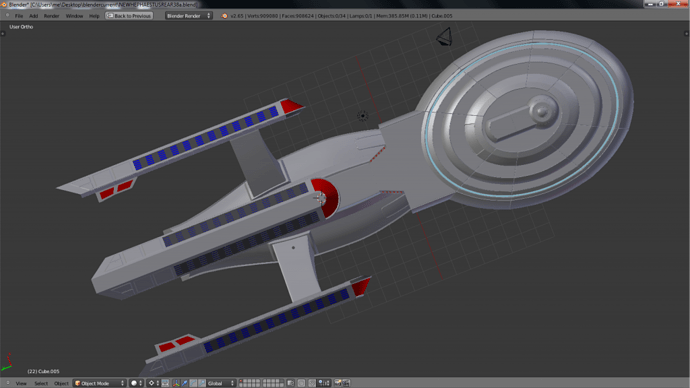 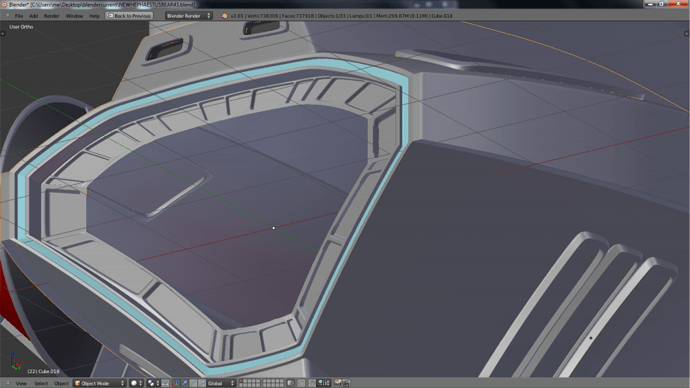 Finally started on the array. This ring of panels will have a blue or violet glow if I can find a shade of violet that doesn’t look too…you know. It will be violet or blue to show it’s optimized for high frequency detection.

Finally for the front end finished. 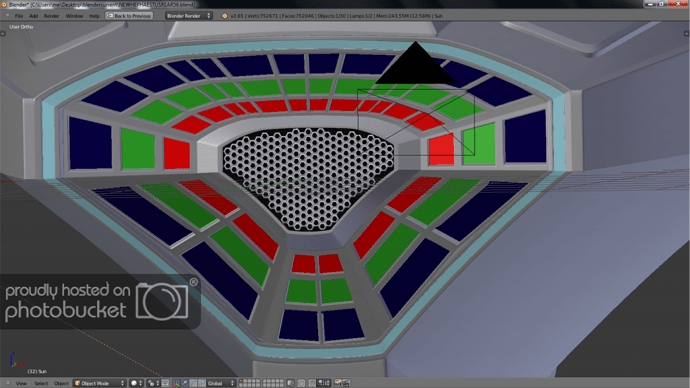 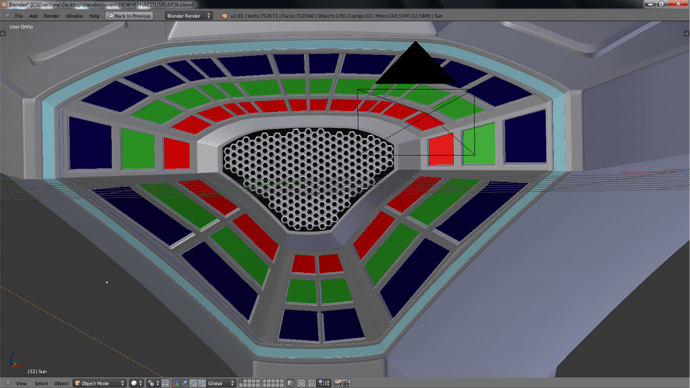 Finally got the rear hull mech basically finished be sealing up the rear with the finished shuttle bay. 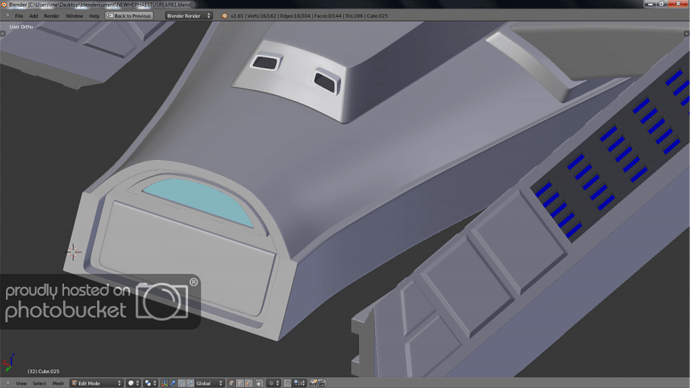 Rather than the complex, relatively easy to damage and hard to repair clamshell or rolltop desk type doors used on many ships, the Hephaestus’ rear hull uses a simple, rugged, easily repaired trap door arrangement. The shuttle bay door swings downward like the tailgate on a pickup truck.

The blue light above is a large aft sensor array meant to prevent those annoying and embarrassing surprise attacks to the stern. Also to deal with that issue the aft torpedo tubes are visible above the tail. 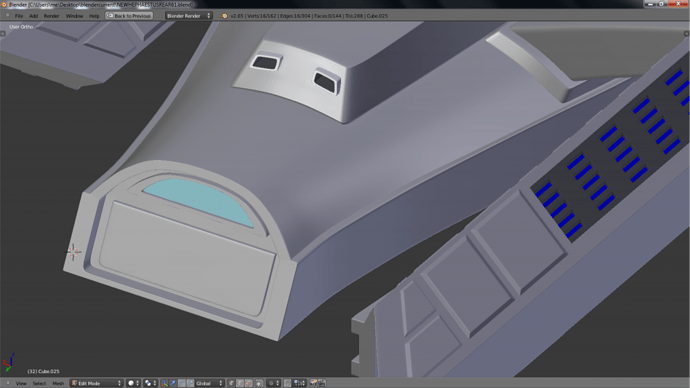 On a roll tonight, added the rear hull impulse engines. 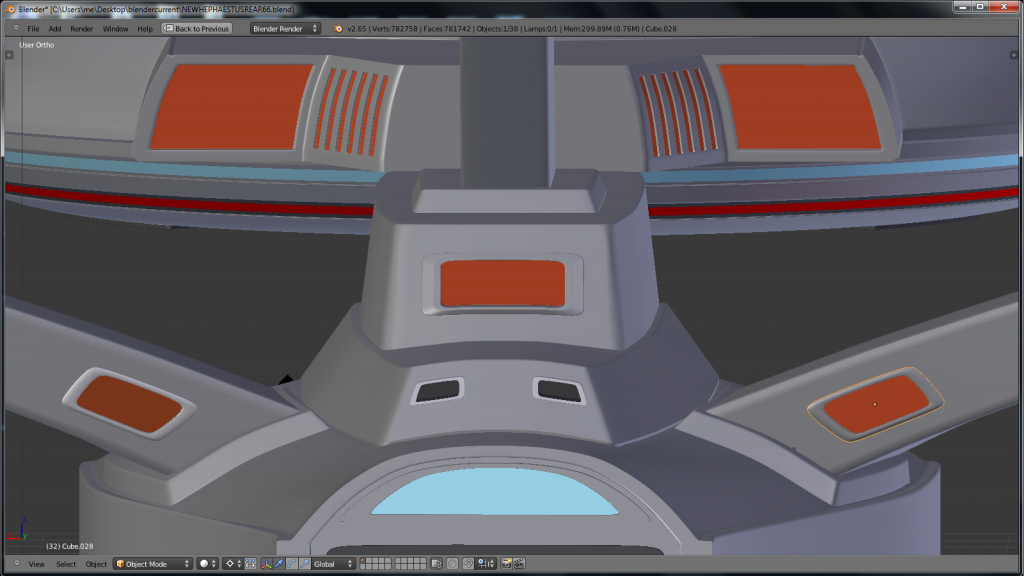 Yes, the hepheastus has a lot of impulse power and engines. Partly it’s for power as the ship might have to tow heavy loads in some cases, partly its for maneuverability. Due to her impulse engine arrangement the hepheastus is surprisingly maneuverable for a ship her size. Also it’s for power as impulse engines can be ran as reactors and produce considerable energy from fusion of low density, common elements.

This is a cycled render of the ship so far, I’ve been poking around the cycles render and node material options. Still the basic unnoded material makes a great basic hull material.

I did use nodes for the glowing and glass parts, have added some machinery to the inside of the bussard intakes. Thanks to peter draculic I have also added phaser tracks to the hull. Thank you Mr. Draculic. 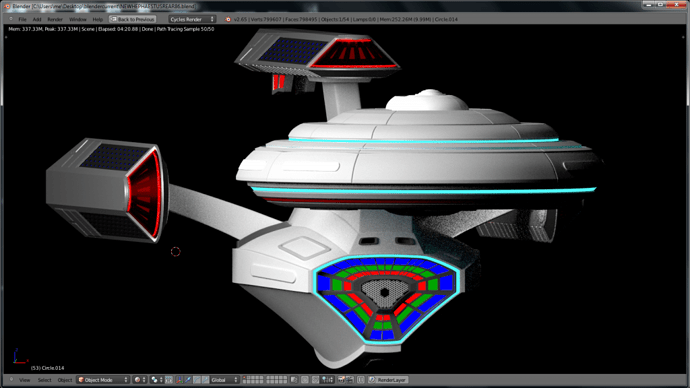 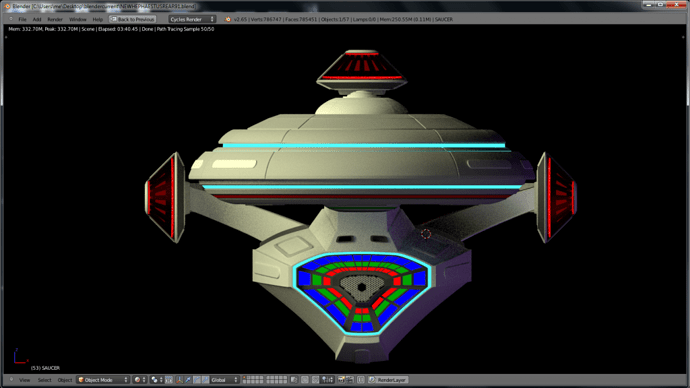 Doing a little lighting, with a yellow star and purple planet. May need to look uo ambient lighting settings next.