complex(ish) sub-D shape... how would you approach this task?

I’m still quite new to modeling. I am trying to model this shape as a single sub-D surface: 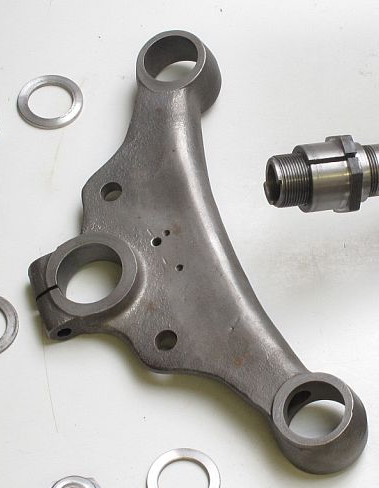 So far I have this (note: I know a few of the proportions are wrong and that the radius of the bend leading into the ring is wrong… fixes are coming. I am really more tying to learn procedures here). 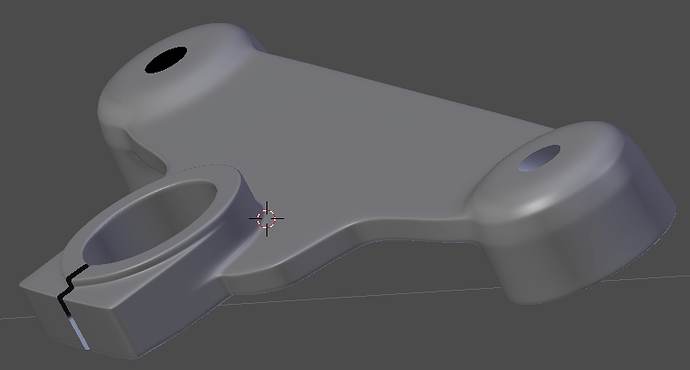 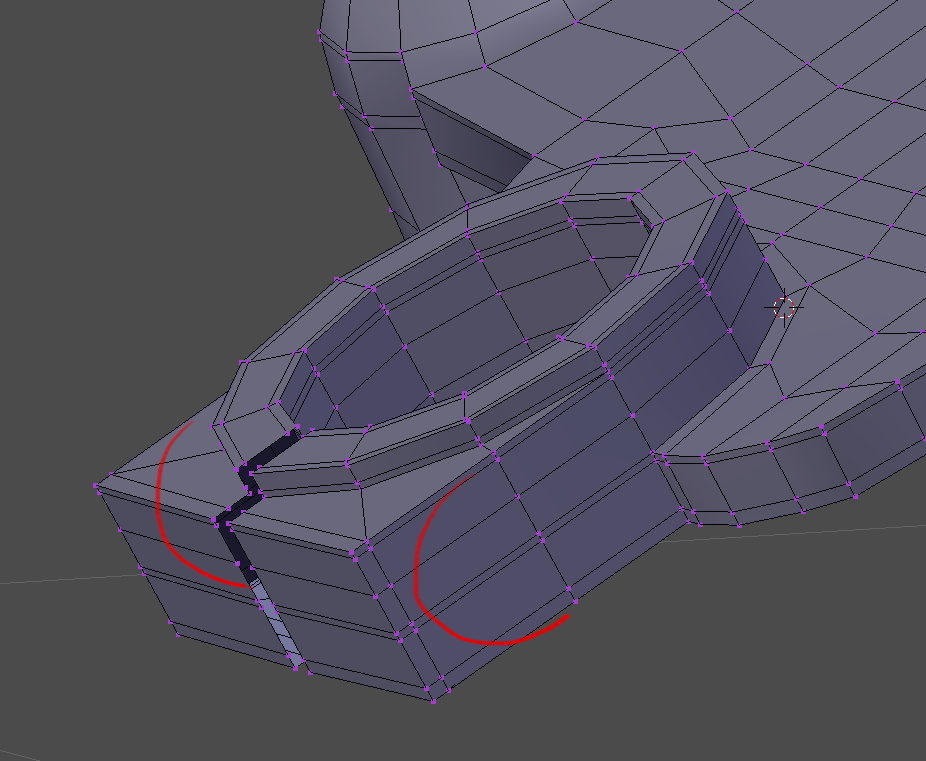 The way I got there was to start with a simple cylinder (One of the posts on the end of the piece) and then started extruding faces and inserting edge loops. The problem is that the further I go, the harder it gets to build the complex, interacting shapes. All of the previous extrusions and new edge loops feel like they are backing me into a corner the further I go. As it was, it took me a fairly long time to get that ringed hole in there (The one you see close up in the third image), and then it was even more difficult to get the two blocks on either side (and I eventually gave up and introduced two tris to get it to work). Now I cannot figure out how to round them as marked in red in the third image.

So, my question is this: How would you go about creating this shape? Would you start with a primitive and just keep inserting edge loops and extruding your way to pure Blender Nirvana? Or would you start with disconnected shapes (i.e. the two cylinders on the ends, the ring in the center, the blocks on either edge of the ring that hold the bolts, and the sort of wing shape that connects them all). Would you create these such that they work on their own and then somehow start connecting them up once they are in place and more or less working independently? Or is there some third way that I haven’t thought of yet?

Thanks in advance for any and all advice

Here is the .blend file:

Personally, I’d likely use a box for the main section and some cylinders for where the forks go and just join them manually, I’m no expert in modelling, but there doesn’t look much wrong with how you are doing it. I might use edge sharpening rather than added edge loops in a couple of places, but overall, seem fine.

I usually prepare drawing or photo first.
For this bridge part just dropped in two circles and plane (we do have a Mirror modifier ;)), figured out shape of the plane and where it meets the circles, dropped in some loopcuts on plane, connected what’s available to the circles. All what’s left is to extrude up, then up/down circle rings. LoopTools to smooth and even out out selected edge loops (one by one). For the smaller holes (if they are needed at all; there will be a screw head rendered on top anyways) - select one closest vertex, move where center should be and Ctrl-Shift-B bevel the vertex. Again add some loopcuts for extra verts created and use LoopTools Circle.

For the tightening screw hole - Inset selected cylinder faces and extrude them twice - a little bit first time and a bit more again, then inset from the side view and use vertex/LoopTools to form the hole as in above. If you need that sharp edge look - Smooth, then checkbox Autosmooth on ObjectData tab and angle adjustments there. Edge creasing N-tab, top also helps.
There are some tris in however does not seem like they are going to be troublesome. http://www.pasteall.org/blend/42943
GL.

Thanks so much. It looks like you are both suggesting creating the individual shapes first, and then combining them afterwards followed by adding the edge loops needed to make the sub-D’s work. (colkai, I am trying to avoid using edge sharpening right now since I am not sure that will translate from Blender into Renderman… it is something I should research though).

Thanks for the detailed description of what you did (and the .blend file). I am trying to re-create my object using your methodoloigy and so far it seems to be much much faster than what I was originally doing. I have, however, gotten into a corner that I don’t know how to get out of (and maybe it is as simple as adding some tris, I don’t know). 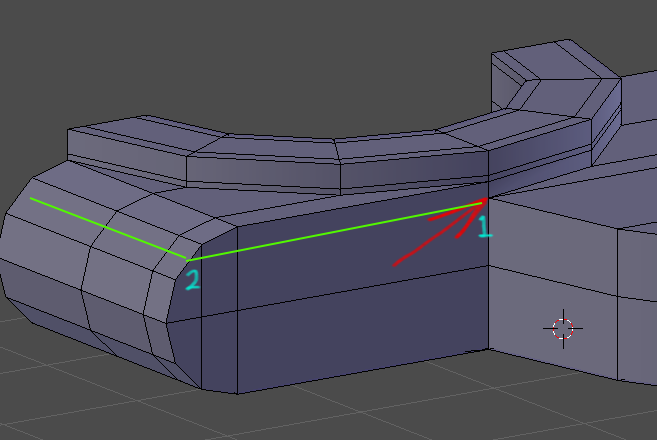 The first is that I have an n-gon (where the red arrow is). Should I just make that into a tri there?

The second is that if I add an edge loop (where it is green) then I no longer have a rounded shape (at #2). Instead there will be a kink there. Also, there will be a tri at #2 which will make adding edge loops there more difficult too.

So adding edge loops sometimes destroys nice rounded shapes. Is there a better way to add edge loops that doesn’t kink circles? Or do I just go back and manually adjust those points so that it approximates a circle again (sometimes that seems a bit fiddly).

Thanks again for the help so far! 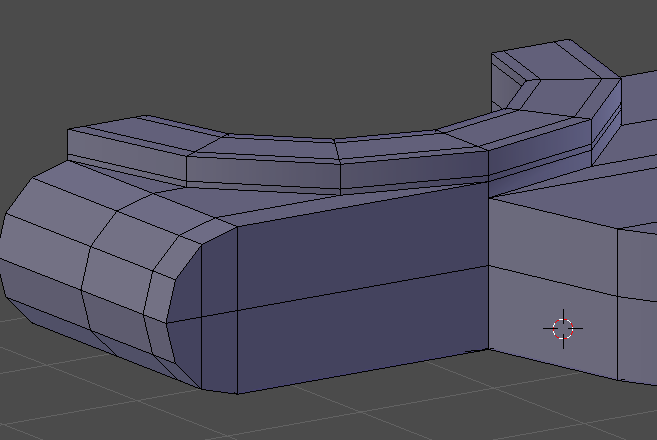 And your image edited a bit - leave one face gap on cylinder.

So adding edge loops sometimes destroys nice rounded shapes. Is there a better way to add edge loops that doesn’t kink circles? Or do I just go back and manually adjust those points so that it approximates a circle again (sometimes that seems a bit fiddly).

Yes, you’re forced to add a loop sometimes and yes it would destroy a circle shape. Nothing much to do but for a precision keep a copy of original cylinder and shrinkwrap distorted on a good one which you either hide from render or apply Shrinkwrap at the end. You’d need to establish a vertex group to set on Srinkwrap modifier. Sometimes manual push/pull ‘by eye’ is enough.

That does help. Thanks. I’m going to remake the piece once more. The final product is less important to me than learning an efficient way to do it. I appreciate your taking the time to help.

Ahh, yes, if it is for export, you may well be right that sticknig with edge loops is the “safer” option.