I am working on a complex model that consist of 300 parts. I made it in CAD environment and imported it to blender as stl.

How it works with smooth / flat. My model has many faces smooth and many flat but if I had to select them manually it would take years. Is there any easier way?

Is there any way to recalculate a new mesh? As current model has it messed of stl import and its triangle mesh. I found out ctrl+f and convert it to quads but it doesnt looks like it will solve whole mesh problem.

You need to organize those parts. Use Group to bundle related parts. Smaller bundle of part makes it possible to work on different parts much easier. Those groups can be linked to the main model as an instance.

Do the model include many repeated parts like nuts and bolts? Replace those with group instance as well to make the whole model simpler.

Yes there are many screws , hinge pins and so on. Thank you I ll look at group works in blender but until now didnt found so useful tutorial.

But what about smooth? If I add smooth to my mesh flat faces looks spherical. Any idea how to get rid of it without too much work please?

And is there way to reorganisate a mesh. For example Iam having many parts that flat places have so much edges connected with many verticles on one side and with only few on other side. This is doing mess in some things like subsurf modifier. 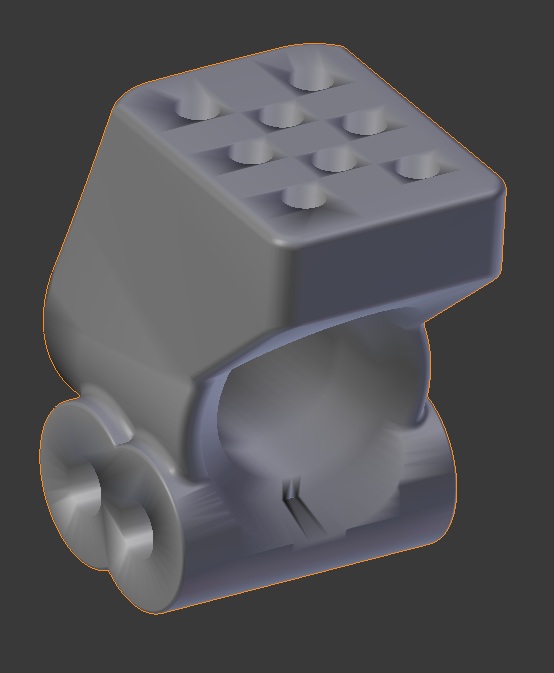 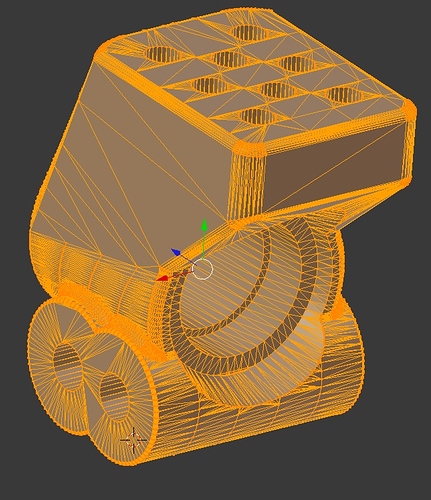 Use Smooth and Edge Split modifier together.

Wow. It works good. Thank You

Unless you’re just talking about the rendered version looking good, I would use auto smooth in the mesh options area. This will only smooth areas with a defined threshold (set at 30 degrees) when you render, keeping flat parts flat and anything else with a deflection from the previous face of 30 degrees or less will be smoothed. Blender, for some reason doesn’t have the ability to display auto smooth in OpenGL, hopefully something that will be addressed in the future, but it will display correctly at render time. It’s just another way of doing it to reduce faceted geometry even in edge split.

Okey. And what is technically better / more used? Edge split looks good because its easy to check what it does. But with autosmooth I need to render it but it looks technically cleaner to me than use modifier.

BTW: When I was exporting file to .stl I chose some angle for generating mesh. If I add the same angle to edge split / auto smooth it should have just right shading?

Is there a way to mirror many object by modifier with the same mirror point / plane? I was looking for mirror group but only found vertex group what isnt that what I am looking for. Thanks.

Does edge split only work in blender or would it be maintained if I exported a model into a game?

I really cant find it. Is it even possible to add modifier to many object or to add modifier on group of object? I want to edgesplit objects + mirror like 100 objects and it is very time consuming doing it not together. Thank You.

Edit: Found out that it isnt possible so only way is to copy modifiers

Thank you for help.

@Logger
Generally speaking 3d graphics differs from CAD in concept. The goal of a CAD program is to produce high quality plans or 3D model for rapid prototype. Whereas a 3D mesh modeling program is intended to create plausibility.

Here is an example; If you design a mechanical part in AutoCAD you have to engineer it down to a fairly tight tolerance or it wont work once its created.

In Blender if you render out a scene it is pretty much impossible to tell if your bracket has a 28 degree radius or a 32 degree radius. Hence if you are close enough you will achieve a desired level of plausibility in less time.

With this in mind you should probably look for efficiencies to make your scene easier to work with and speed up your render time.

Here are some efficiencies that you should consider

Generally speaking its better to import your CAD data and then use it as a guide while you actually model out each piece in Blender. I know it seems redundant and unnecessary considering that you already modeled it out in a CAD program. However you will be glad when virtually the same model renders beautifully in 30 seconds as opposed 2 hours or more.

If you wish you can upload one of your components and I’ll rebuild it for you, so that you can see this concept demonstrated.