Compositing several scenes test - is there an easier way?

Hi everyone,
I’ve been trying to find a solution for compositing two scenes and have both render when hitting the Render button. The reason for this is to composite Freestyle lines over an Eevee render. I set up one scene to render out my Eevee shaders, then another to render Freestyle (with the render engine set to Cycles, where it works fine).

Currently, my solution is to enable the Sequencer in a THIRD scene where I handle all the compositing. I add both scenes to the Sequencer, overlaying the Freestyle Scene set to multiply, and then I set up the compositor to set up any extra nodes I might need. This seems to allow a one-touch render solution, but I was wondering if there is an easier way? 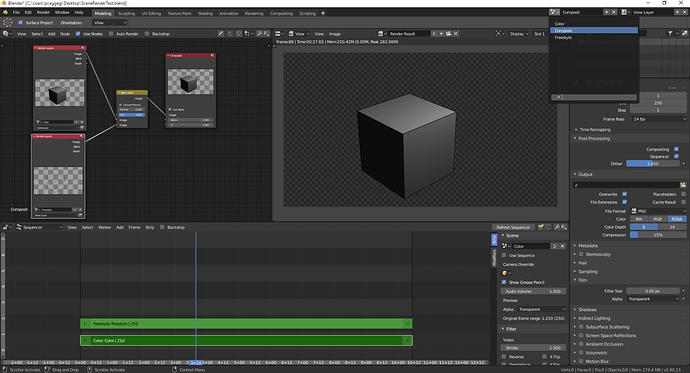 Easier way than one-touch? To my knowledge no, it would already mean thought control

All that said, doing this stuff with multiple scene is kind of clunky and I hope at some point we’ll get a simpler way do to all this in one scene.

Using the sequencer, I found a master scene calls both scenes at rendertime, and gives a good final composite. Yeah, the only reason for doing this is because Freestyle doesn’t work in 2.80 Alpha yet - it might soon, and this will resolve itself.

This was working fine in 2.7* versions, sounds like a bug

I hope with dynamic override we can have different render engine per render layer, that would be a great improvement , using multiple scene is a very old hack …

Also IIRC the VSE outputs only an 8bit image, so make sure all the color corrections are in order before outputting

Tested in 2.79 - sequencer will render an animation and update linked camera data no problems. 2.80 - this doesn’t seem to have been implemented yet, both for the above workaround, as well as the simpler scene/render layer in compositor set up.