I’m not back to plane or flying machine on this one, I’ve started it for a contest on a french Blender community on the them “concept gun”. The contest is over, but I want to work again on it as there is a lot of thing I had to done quickly and dirty

Basically, mine is about a rifle with embedded and wired computer, with a plugged touch pad.

Here are the renders : 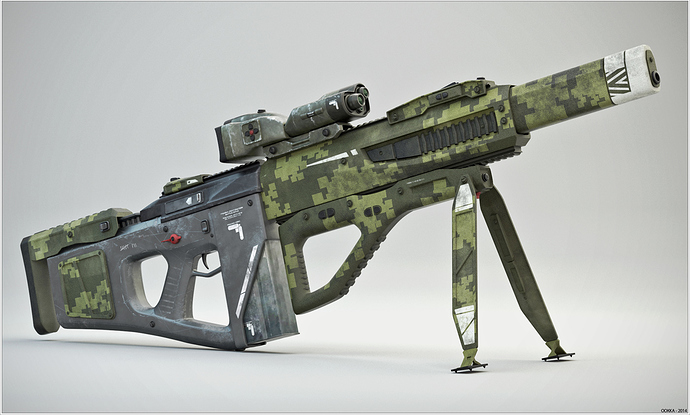 (sorry for double post, just to get the fourth one) : 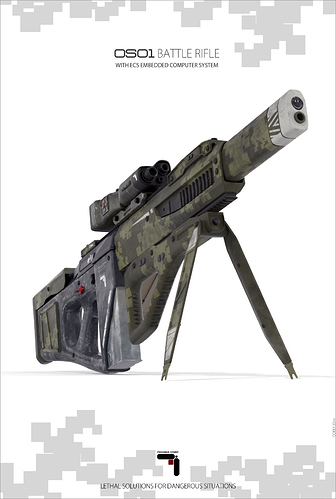 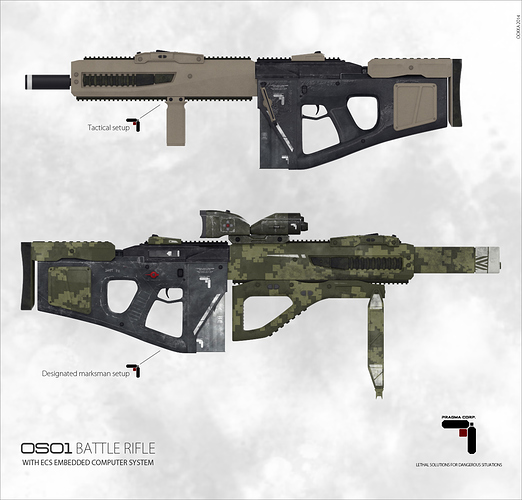 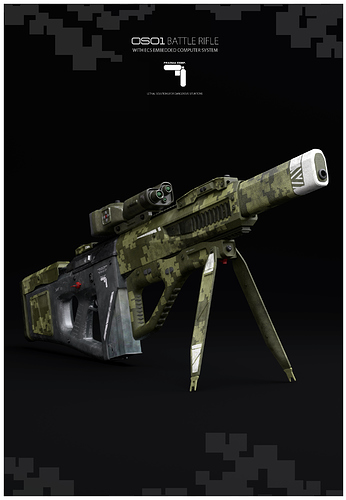 Hey this is really good! Nice amount of designs from existing real world weapons/concepts to bring that needed amount of believe that it would work or even be real some day. Of course someone could say it’s a bit boring and something that everyone have seen in futuristic military FPS games but I would say it’s a design that has connection to real world.

So it’s not unique but good design nevertheless.

thanks IconW: I’m not a FPS player, so if you find it believable or looking like something that it could be seen in such game, it is a very good point ! I have try to make it credible and close to actual/potential design, so for sure it is not unique, you’re right.

Some critiques or advices from somebody and differents scene and lighting setups (white versus black, etc.) ?

I think it’s fairly unique, just because it’s not a style that’s never been seen before (which is practically impossible anyway) doesn’t mean it’s not entirely new. One wouldn’t call a given song in a given genre… not… unique just because it is in a certain genre right?

I think it looks actually, yeah, pretty unique. I like that there’s unexpectedly no muzzle break. And that the barrel is set into the bottom of that housing. Presumably because the gas return line is above the barrel, but still interesting to see that big flat face with a hole at the bottom. Reminds me of the water cooled machine gun barrels from WWI. It looks like that entire barrel assembly could cycle like you might think of the large guns on battleships doing. Instead of a bolt cycling back and forth in the back the whole barrel/firing chamber cycles? That’s just what I think when I see how it’s not one solid piece with the rest of the gun. I think that’d look pretty cool if you animated it. Usually when you see thumb hole stocks like that it’s on bullpup type weapons so I was surprised to see the mag in front of the grip.
I like the straight line from the bottom of the mag well across the pistol grip and back into the stock.

One thing I have to point out is that the suppressor on the tactical setup looks way too tiny. I guess you could get away with saying it’s a super high tech compact suppressor.

But when I look at that big housing around the barrel I think there has to be more in there than just a gas return line. What if there were an integrated suppressor built into that large barrel housing on the marksman setup? It would explain the lack of muzzle break. And it could be engaged and disengaged with a control on the weapon to enable easy switch from the suppressor function to the presumably better range/accuracy performance unsuppressed? Of course you’d kind of have to put the larger housing on the tactical setup as well then which I think would look cool!

Also maybe consider and interchangeable barrel thingy so you could have substantially shorter barrel on the tactical version if you wanted. It looks a little long for what otherwise seems to be set up as a cqb weapon?

@shipwreck : thanks for your detailed comment. Indeed, the barrel is a sound suppressor and on the tactical one it is a flash suppressor. For the shorter mag, maybe I should try. I don’t know how to manage it with the part of the stock just back of the mag… Thanks again for the critique and comment anyway.

@AttenseFx : thanks for nice words.

Here is the current tries on renders, some improvements on modelling and materials, and a “stronger” bipod. Hope you like but feel free to comment and critique the whole

(I think I will do minor adjustments, add some bullets and maybe a knife, do the final compos and call it finished) I have no special faible for weapons, but these are nice renders, ooka. Very fine modelling and texturing. But practically it would be difficult to change the magazine, especially in the marksman setting.

thanks for your comment especially if you don’t like weapons (I am not a real fan too, but it is a design exercise for me). For the mag, it is not really perceptible on the renders, but there is a hole in the stock and the mag could be extracted by the bottom. But you have to tilt the gun or lift it if you are prone.

Nice. Very nice. I LOVE the scratches on the scope and the back part of the gun. Great materials and modeling!

Wow, very nice job on the design and texturing! I feel the clip would be hard to pull out though. Maybe add some type of grip to the mag. Or a loop of cloth? Not sure.

@coolfiled7 : thanks a lot, very appreciated. The scratches were a hard part, I had to paint it “pixel by pixel”

Glad to see you like it.
@ferrettank: thanks a lot too. Good idea indeed for the grip on the mag ! I think I will try something on it, thanks.

You’re making great progress on your gun concept, ookka! Have you ever tried Quixel or Substance Painter? They take slightly different approaches to texturing, but could be a useful addition to your workflow if you have pieces you want to texture very quickly. I know it takes a lot of time to texture everything manually!

@coolfiled7 : thanks a lot, very appreciated. The scratches were a hard part, I had to paint it “pixel by pixel”

You’re welcome! pixel by pixel?? What do you mean!? You didn’t use a certain brush for scratch effects?

@James: thanks mate. You are not the fiorst person to advice me to test substance, I will try it. I use to unwrap and texture manually everything, but it could be interesting to find some new workflow step/tricks.

@coolfield7: I made for this one 4k textures (one for the stock for example) and even I used some brushes to get the main effects, I had to make some little scratches with one pixel pen in PS… the only way I found to get subtle scratches in high resolution… tedious way, but it achieves the effect, so…

I made for this one 4k textures (one for the stock for example) and even I used some brushes to get the main effects, I had to make some little scratches with one pixel pen in PS… the only way I found to get subtle scratches in high resolution… tedious way, but it achieves the effect, so…

Wow, knowing that now, I would really appreciate a render with a higher resolution, when time and texture are ready

@coolfield7: I made for this one 4k textures (one for the stock for example) and even I used some brushes to get the main effects, I had to make some little scratches with one pixel pen in PS… the only way I found to get subtle scratches in high resolution… tedious way, but it achieves the effect, so…

WOW :eek: Great result though, I’d say it was worth it.

Please help ! I am at the damned step… Two options now : the first one I will throw my computer through the window because I have the feeling things get worst at each render OR stay focused

I do not found something that I like for lighting and scene. So please let me know which render do you prefer (or imagine) : first ones on white background ? Black one ?

Even I can stay weeks on one project, let it beside to come back is not an option, as I never reach to go back to a project once I started another one

I like the white background a little better. It feels a little surreal as a setting, and clean and pristine like I imagine the future to be. This is the kind of environment where this gritty block of lethal hardware would be displayed in my mind. With a weird autotuney computer AI inexplicably female voice introducing it and explaining the sats. Contrast is the word, I like how the pristine background contrasts against the gritty hardware. That said. Please. Teach me how to texture!

I mean it. Like hold my hand and train me as your padawan or however you spell that.