I am kind of new with blender and have started this project to learn some basic methods of making a simple BGE games, and in long sight, getting something finished. The actual game I would like to make someday, would be a 2D story driven puzzle platformer. I made a fast testing scene for my project, because first thing I wanted was to determine the dark and scary mood I’m looking for the game.

The game itself would take place in abandoned city after a nuclear disaster (no, no zombies, they are everywhere nowadays). More than scary and dark, I want to make it sad with storytelling and music.

-Black & White CRT screen kind graphics (yet do decide if its completely B&W(See the picture, tell which you prefer))
-Ortographic camera view
-3 layers where player can move in and out. (layers can be separated by darkness of objects(again, see the picture)
-Simple inventory system
-enemies that will chase you, which could be distracted by hiding (far in future) simple sneaking system
-flashlight
-screen effects for low health, high radiation, and extreme cold

I have created the CRT effect by adding three 2D filters on top of each other. 1st is black screen noise, 2nd blur and 3rd chromatic abberration. The broblem is I encounter serious FPS drop when activating the chromatic abberation filter while particles are emitted. I have fairly powerful computer but Framerate drops from 60 FPS to merely 20 FPS. If somebody would know way to do this efect with smaller framerate drop I would be thankfull. second broblem is that my particle blugin is buggy as Duck, so I’d again be thankful if someone would recommend some stable particle addon. I would also like to hear what you think of my idea. These screenshots don’t actually make much honor for the actual filter, but I did not have time to make a video of it. Sorry for bad english, it’s not my native language… 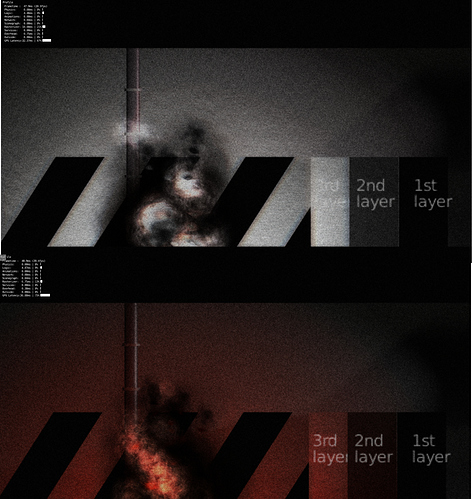 I like your idea about the storytelling and music. Games lack emotion. ‘The last of us’ was probably the first game I played that had a real sense of emotion and it was such a breath of fresh air

I’m not sure about the filters as I havnt really used them yet. Maybe you could try to find a single one that does the effect on it’s own? You can download custom filters and they are easy to use. Just set the ‘Filter 2D’ actuator to ‘custom filter’, copy & paste or open the filter in the text editor, then back on the ‘Filter 2D’ actuator, select the filter you just added in the text editor.

Hey, don’t apply the filters every frame, if you have them set up to an Always sensor. They only need to be applied once to take effect.

Seems like a pretty cool game concept so far; I think color would be a good idea if you’re doing a game like this; going with just monochrome graphics would be a bit tough, I think. I like the idea for a story driven puzzle platformer; would you have a central feature or idea, or would the puzzles be more “general”?

Thanks for both of you! Here is a storyline I’m thinking: A man (yet nameless) has been send to test drive some old remote nuclear facility (eventually it’s built in middle of a small city which is realisticly inaccurate But you can’t please everybody) with His crew. Something goes terribly wrong and One of the 2 reactors melts and explodes. Most of the crew dies in the explosion. Some time later our character then wakes up and has to get out of there. The whole game would be based on characters memories while he sits in a small radio tower room writing His story to computer, unsure If anybody hears His emergency message. While you play the game I’d like to make voice storytelling of on screen events in past tense, as If he was telling it to you or you were reading a book about it. It would add some depth to the story If there were included Something from His past from time to time. I’d like to give him a sad background. His older son has died many years ago maybe in schoolshooting, which led him drinking and His wife then wanted a divorce. His driving force to survive from the hellish town is His younger daughter, who’s adult now. Story would not Only include the sad moments But moments like him getting married and His children growing.

Please tell If you think this is too shallow or should be otherwise altered. It might have some typos, wrote it with cellphone.

Oh and those puzzles, I think the would be based to surviving. Finding paths and clothes because its cold and getting power back on to operate blastdoors and elevators.

This looks pretty cool! Sort of like a first-person (as in context, not view) version of This War of Mine. I look forward to seeing what you can do with this!

I like the story, and I like the idea that the gameplay is the player recalling his memories. This leads to some interesting gameplay. Dropping hints for puzzles could be done in a believable way, since in reality the character already knows everything that happened. “I began walking down the long road, but eventually had to turn back for something I had forgotten…” could give a clue to the player that they need to go back and find something they missed.

You could also play with some reality-altering game environments as well, as all the character’s mental baggage starts leaking into his memories of the actual event. Many possibilities there.

I would think the ultimate goal of the game would be finding the radio tower, getting power to it, and getting the computer to boot up; with the game ending where it begins. Very nice

Dropping hints for puzzles could be done in a believable way, since in reality the character already knows everything that happened. “I began walking down the long road, but eventually had to turn back for something I had forgotten…” could give a clue to the player that they need to go back and find something they missed.

Wow! That’s actually an exellent idea! Never tought of that myself! Thanks!