Full disclosure: I’m a noob (got Blender about a week ago, have never done any CGI before, and only joined the forums this morning), so I apologize if this question has been asked before.

I’m in the process of making a starship, and a central component of the ship is the structural spine. The spine is going to be either an octet truss (example here)…

…or another type of space frame (I don’t know what this type is called).

Now, I realize that the truss is composed of a repeating pattern, and that to make it really long, I can make one segment (one of the octahedrons for the octet truss, for instance) and duplicate it as many times as needed. No, my problem is going to seem much, much sillier to you guys.

I can’t figure out how to do the diagonal connectors.

I thought maybe rotating it freehand would solve the problem, but that just left me flailing around like an idiot.

TL;DR, does anyone here know an easier way of making those diagonal connectors?

The method you use kinda depends on how closely you’re going to be looking at these trusses. For super high detail levels, you’ll probably want a dupligroup for each intersection. From your description, it sounds like you are duplicating objects multiple times. This makes sense if you want to add a high level of detail later, but if the shown level of detail is what you want, you’ll be much better off using a single object with an array modifier. I recommend the “curve” object, because you can dynamically change the level of detail and the truss member thickness.

It’s also fairly straightforward to connect nodes, so the diagonals are a breeze. Simply select two points, duplicate them (Shift-D), and then link them (F).
Here’s one I made as an example.
Truss.blend (77.2 KB) 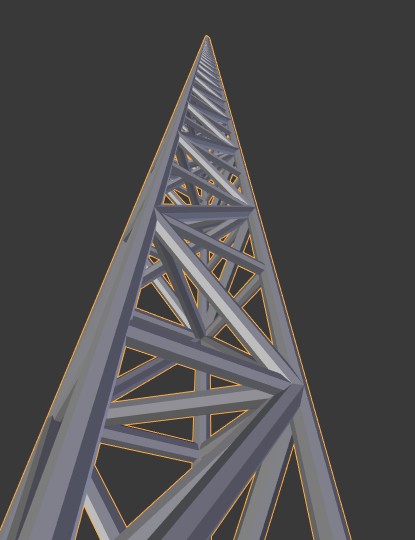 So, just to make sure I understand that correctly, I create a mesh (cylinder or cube), apply the “array” modifier to get four of them, and then apply the “curve” modifier, presumably using a Besier circle, which will let me set up the four objects around the perimeter of the circle.

Unfortunately, I don’t think I follow what you mean about duplicating two points and then connecting them.

I just realized I wildly misinterpreted your use of the array modifier; you meant I should use it to copy the first object, not to array the cylinders around a circle.

The one thing I still don’t understand is how you got a curve labeled “cube” and how you got it that shape.

I actually may have come up with a workaround.

I used cubes instead of cylinders (scaled so they were long rectangles), cut a ton of loops into them, deleted key faces on each cube and used the “generate Face” tool to connect the edges of the void on one cube to the void on another.

After all of this, I used the array tool to duplicate the thing. I’ve attached the result, added to what I have of the ship so far (the cylinders of various sizes are the starship’s fuel tanks, and the disk at the back is a radiation shield; the fusion drive will eventually go behind it).

Even after doing this, I’d love to know how you created your truss, since that allows for the individual components to be cubes, cylinders, or whatever I might want.

Use the skin modifier.

I made one. dudecon probably used a similar process

Wow! Thanks for all the suggestions, everyone!