I’m working with Cycles and I’m having a problem controlling the transparency on a globe. I used alpha mapping to put the “ocean” transparent and leave land visible. The question is that I also want the land a bit transparent.
For that I used the alpha map to give it a little transparency. The problem is that when the land overlaps with the one in the back of the globe, the multiply effect in the color is too strong. I already disabled shadows in render and it helped a bit but still, that multiply is too strong.

Here’s the node editor. As you can see I made the Alpha Map and then added a mix shader with transparency in order to try to control the “global opacity” after defining how I want the transparency in the alpha map.

But why doesn’t he just puts the opacity down as would happen if I pick up a render image and put it in Photoshop? Is that so difficult to acomplish?

Hmm, I don’t see an immediate flaw, it kinda looks like it should work… Very sucky when logic does not dictate the outcome.

Try changing the second transparent BSDF to something else, a diffuse pink, glass or whatever and see if that have an influence. Kinda breaking the chain trying to thus locating the issue.

Feels like a bug, though, perhaps the first transparent material disables the second due to this creating transparency on transparency which breaks the math of the setup?

Hmm, I have bad news - it works here… 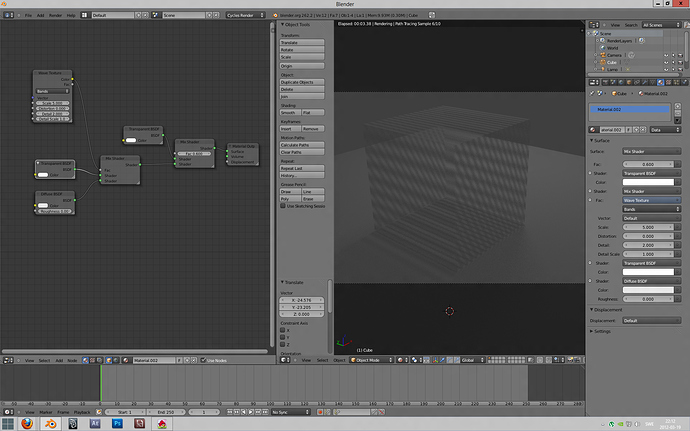 Just did a similar setup and I don’t get that issue… I do run a daily build of Blender, though, perhaps it’s a bug in your version that is now fixed, or something in your setup - like the UVs - is throwing it off… Hard to help you further w/o the blend file now.

Thank you for the reply Farmfield.

Your node setup is just like mine but yet I can’t see for your picture if you have the same problem.
I defined a image for the alpha and another for the texture itself. Both of them combined (w/ transparency) have a result. What I want to do is just pick up that result and apply a decrease in opacity, maintaining the proportion (of transparency) that was already defined by the alpha. Instead, Blender is using the second transparency node to still influence the balance that was defined by the alpha mapping.
I’m trying now in my home PC to see if I get the same problem.

Thank you for showing me that my thought was logical :P.

Just tried the same thing at home and the problem persists. I guess you can’t try to affect the opacity of a already made transparency in Blender, without affecting the way the first one blends the colors. If it was like Photoshop we could just render it and then in the layers just lower the opacity and export the png. I guess that trying to make these 2 adjustments within the same shader does not work the way I hoped it would do.