Convert a curve-based geometry nodes to a mesh

I have a series of hand-drawn bezier curves that are then being manipulated via geometry nodes.

I want to convert these into a mesh that I can now hand-edit but I don’t know how to do so. If I try to apply the geometry nodes it says that I can’t do that since the underlying object is a curve (makes sense).

But if I use the convert to mesh option, all of the geometry nodes are discarded and I get an empty mesh. The same thing happens if I try to export the curve as an OBJ.

If I export it as an alembic, I get the original curves without any of the Geometry Nodes modifications.

Is there a way to use curves with geometry nodes and then convert the result into an editable mesh?

Edit (off topic): I know I could use a curve-to-points node to combine some of the above nodes, but this appears to be more or less the same set of steps.

You should be able to convert to mesh right away, but in your nodetree I think you shouldn’t convert to point and to vertice, this should work : 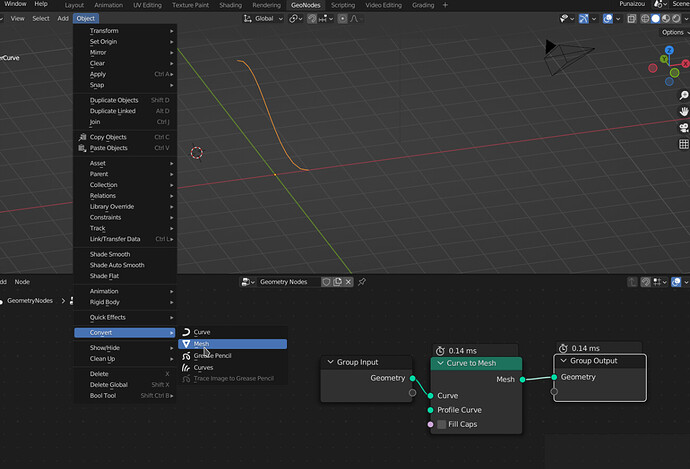 With geometry nodes some internal changes needs to be done to handle that better, for now it’s a bit confusing.
A geo node object can be based on a curve and end up containing mesh, volume , point cloud…
that are different type of data in blender, then in the eye of blender what is the object then ? it’s still a curve.

Or you can have a mesh object with exactly the same object type salad, and it will be considered as a mesh. When you want to apply the modifier these come into play.

Maybe the problem comes from instances, you need to add a realize instance node to make sure it’s converted to actual geo.

A more involved fix : you can add a mesh object, add a geometry node modifier to it, and add the object you want to convert with the Object info node.
Make sure everything is converted to a mesh, like no more curve , point cloud volume and also instances laying around : they are likely to be discarded.

From there you will be able to convert to mesh too.

Aha. You pointed me in the right direction. I had some other nodes in there that were preventing it from being converted (a disconnected mesh line node).

But the weird thing is that though I am able to convert it to a mesh now (and I see all of the vertices in object mode - thanks for that!) when I hit tab into edit mode the vertices all disappear and there is nothing I can edit. Does that make any sense? I can’t figure out what I am looking at in object mode where I can see the vertices, but then in edit mode nothing appears to actually exist.

The spreadsheet shows that the vertices are actually there. Do you think it could be because these are all free-floating vertices with no edges or faces?

I think I will just instance a face on each point (instead of converting the points to vertices). That should hopefully solve the issue. I really only need coordinates and I can use face centroids just as easily.

Hum, I think it should work like with any other mesh, you can try to make a very simple test case .blend file and send it over here so we can look at it and find the issue .

Thanks for the offer. Unfortunately I am not allowed to send data of any kind from work. But I might try making a simple example at home and uploading. That would be later this evening.

In the meantime, you totally got me back on track and I am very grateful for that!

Cool ! I’m glad to have been helpful.
A simple test file is much better than actual production work, you might even find the solution by yourself by playing with it

Good luck and see you later !