I would like to know how I can solve the following example so that I can solve my “real problem”: if I have two faces correctly unwrapped and then I edit the geometry of the second one (or even create a third one by extruding an edge) the UVs projection get stretched.
Is there a way where I can “copy and paste” the UV projection (or UV unwrap) from face 1 so that I can paste it into face 2 and 3 and get everything correctly mapped? 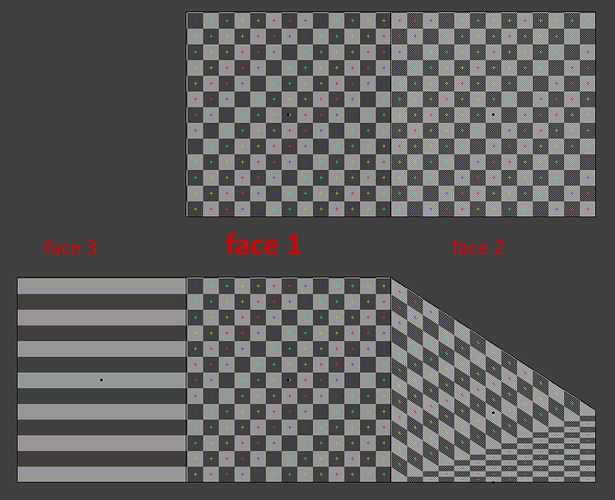 Um, not really understanding why this is a problem. If you select all faces, press ‘U’ to unwrap, then ‘Reset’ at the bottom of the list, you will get an overlay of all faces in the same uv coordinate over your image. If you only want this for these three, then just select these three and do that process. If they need to turn at an angle, you can select all in the uv image editor window and do your rotation.

I just tested, and you can use ‘Follow Active Quad’ to achieve something like this, select the two or more you want to copy coordinates, and then lastly the one to be copied. Follow Active Quads under U menu, and choose length, and they map the same, even though the faces appear in a line in the uv image editor.

I have also tried “Follow Active Quad” and it work only in a very limited situation where your active face is a quad and when the “pasted faces” share at least two vertices.

Answering your first post: imagine I have fully textured an object that has, for example, 100 faces. If, for any reason, I need to edit the mesh or add 2 new faces I need to reunwrap everything. If it tooks me 2 minutes to unwrap the first 100 faces, now I’ll have to spend other 2 minutes reunwraping the 102 faces so that they are correctly mapped.

If it would exist a way to “copy and paste UVs” it would be much, much faster in hundreds of hypothetical cases.
I recorded a video some time ago asking for a similar workflow, check it out:
http://www.youtube.com/watch?v=QH3G9qZgjfw&t=1m43s (the software shown is not as powerful as Blender but its UV editor is great)

In the example of adding faces to an existing mesh, or editing faces in a mesh, that would be two different things. The former would mean you only need to unwrap the two new faces in the same way the others were unwrapped. The latter would mean that you would need to unwrap completely again IF the new faces are inside the others like an extrusion that comes away from a face, or an inset, etc.

The video shows rotation of the texture on a face - that is possible just rotating a selected face in the UV Image Editor window. We had a similar workflow in the old UV panel back in 2.49 and before, where you had a similar ui in a panel that allowed copy from active, even allowing setting single sided versus double sided, etc. Although I don’t really see the use in it, I guess if you need it coded then that means you could revive code from that time period.

edit: I tried using face select in the UV IMage editor, and turning on Constrain to Image Bounds, and I grabbed a face that was unwrapped and it snapped to the center of the image as the others were. I didn’t try with adding faces with extrusion.

That means I would have to code a little in case I want it to revive, hehehe.
If I get it working I’ll let you all know.
Thanks again. 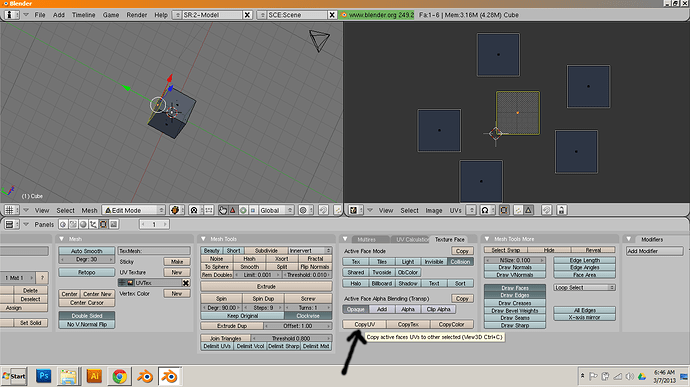 I was also trying it out and found the same “copy UV” button. Anyway it doesn’t solve the full problem because what I need is that the pasted UVs “follow the geometry”… it is really hard to explain, hehehe.
In the next image, the “starting point” row shows the initial state of an “unaligned textures” scene and the “expected” row shows the wanted final scene once you have copied the original face UV coordinates, projection and texture (the face in the center) and applied it to the other ones: 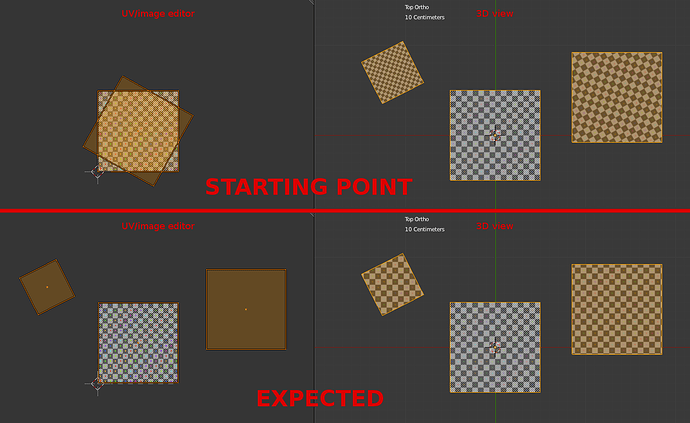 Other example that I can show you is how Hammer (the Source 2 game engine) handles UV texturing and tools to make it easier to unwrap, check the following video to the end, it will show great tools as “copy and paste UVs”, justifying/fitting to face (in BSP game engines they call brushes to elementary blocks or cubes), “texture lock” when translating/rotating or “texture lock” when resizing the face (watch the video till the end):

Summing up, it would be great that these UV/texture tools have their equivalent inside Blender, they are very very handy. I’m not an experienced coder so I would prefer to share it as a “wished feature” to anyone that sees it useful and would like to code it into an addon.

I had tried this addon but what it does is to copy the UV coordinates that the original face has but what I would like is that it gets unwrapped following the reference face (active face) projection. The video I shared with Craig in my previous post shows perfectly what I’m trying to get done in Blende, here you have it:

Maybe share a more complicated use scenario, so you can actually make a visual impact of how it would make things work better. From the example you show, I find it difficult to know your pain since I would just make them work with the tools I have.

Maybe share a more complicated use scenario, so you can actually make a visual impact of how it would make things work better. From the example you show, I find it difficult to know your pain since I would just make them work with the tools I have.

Have to seen the last video I shared with you? -> https://www.youtube.com/watch?v=Sd3fVqaWTY0&t=3m32s

If yes and you still can’t visualize it I can record a video showing some real examples… let me know, please.

I watched it, and all I can think of is that I would select the new face, and if it is sharing the same texture as the others, unwrap it and edit the orientation in the uv image editor. I think maybe part of the functionality in that video might be found in the addon being made(might already be available) for manipulating the uv alignment in the 3d view on the mesh, where the translation controls on the mesh don’t move the mesh, they move the uv.

I would set different materials for the different textures so that I could just follow active or overlap quads in reset. I am not trying to make it difficult, but rather help you to emphasize what this would be like if it were coded.

I’m trying to install the moveUV addon that keokeo is developing, I think it has part of the funcionality I’m looking for, I`ll let you know because I’m having some trouble installing it, I use Maya keyboard preset and I should change a few things…

Cool. As they are different programs, I am just hoping you find your workflow in the functionality that is available or code-able. Completely copying another program is not the answer, but understanding the result and the way to get there is good for the devs to look at how they might achieve it.