I’ve posted another Archviz scene up on blend swap to help new blender heads out and also so you can do renders etc. 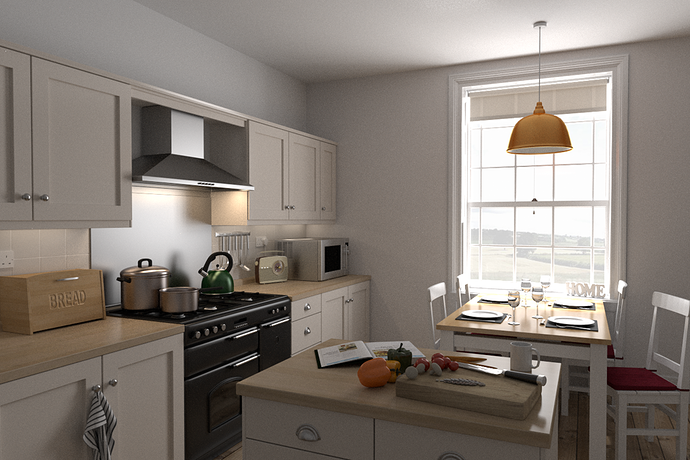 If you’d like further information on the scene, please check out the PDF that’s in the Zip file.

very good scene, my only crits are that the vent hood and the pots on the stove don’t look quite right. Plain metal with roughness changed isn’t quite real.

another nice render.thanks for posting the scene.

I agree with Kemmler regarding the pots’ material (vent looks good to me). Also, the shadows are maybe a bit washed out, considering the strong light from window, and show some inconsistencies (e.g. that of radio on microwave: where is light coming from? If it is from vent’s lamp, then pots have to be lighted too).
These are minor issues, though, and easily corrected, if you are in the mood. All in all, top notch image.

Thanks for the comments so far guys. The vent/Hud and Splash-back shader I modified many times, but I found it hard to get the correct amount for the brushed staneless steel look as it wasn’t until the final few samples that it was smooth enough to tell. The Lights over the Radio and work surfaces come from under unit lighting, which as they are lower wattage in real life have a slight orange/yellow look. Probably because the mesh emitters are quite small, the shadows from them are probably quite tight and darker in contrast.

Ballancing Light is pretty hard in Cycles, especially when the smaller the light source can produce bad anti-alaising if set too high and change the ambience.

As I mentioned in the PDF included, it’s not meant to be photorealistic, just an approximation to get as near as possible with reasonable render times for Archviz. I was hoping that some blender newbie would learn something from it, and maybe eventually improve on it eventually, plus these complete scenes are good for testing out render times and render engines.

I really look forward to see what others might come up with for Archviz in Cycles - and hopefully better me by a mile, so I can disect their blends!

Wonderful render, once again!
I became a fun.
Thanks for posting these beauties.

Another good work, Jay-artist, gonna download from Blendswap to check out the PDF, too.

Very pleasant colors and lights and I’d say the right amount of objects filling the scene, nice work! Makes me want to start again on cycles