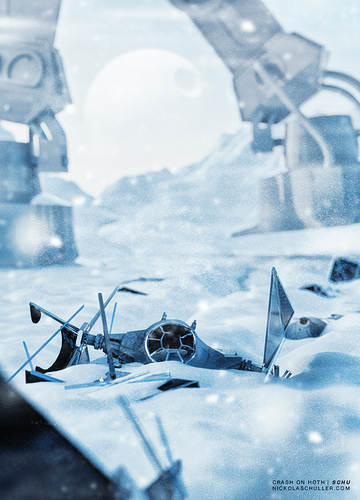 The portrait orientation isn’t great. The image is too cramped, no negative space for the eyes to rest. It’s a landscape so a landscape orientation would serve that better, and because of the theme, maybe even up to 21:9 cinematic aspect ratio.

As a landscape image, the first focus point could be larger, maybe the camera angle needs to be lowered for that. But that should also allow the elements to be spread out, giving negative space, and less perfect positioning. Everything just happens to align in the original, the camera, foreground, subject matter, and the background so that the whole death star is visible and perfectly centered.

If the crash just happened, could maybe indicate that with smoke. If it’s a shot later, the snow would build up on the surfaces.