Hi everyone,
New to blender so sorry for what I expect is a pretty basic question. Spent about an hour googling around for this and couldn’t find the help I need. I just want to create a mathematically accurate ellipse, which I’ll need to be able to extrude so that I have a solid shape, like a disc. From what I’ve read I understand I’ll want to use a NURBS circle. I see how I can elongate the circle, but not sure how to make sure it’s actually a true ellipse. Many thanks for some instruction on this. If anyone knows of a good, basic tutorial on NURBS I’d be grateful for that as well.

can you elaborate a little ?
what do you want to use if for ?

and why using Nurbs it can be done with mesh circle and scale along one axis !

i could give a script to do an exact math ellipse if needed !

I’m actually going to be 3D printing it and using it to demonstrate some of the neat-o properties of ellipses. That’s why it’s important that it be mathematically accurate. I guess I thought I would want to use NURBS because in my attempts to google for this answer I read that you should use NURBS to get mathematically precise conic sections.

Hmm… I just gave myself an idea using the word ‘conic’ – what about taking the intersection of a cone and a plane (for my purposes, an angled plane)? By definition that would make an ellipse!

Well I guess that’s one solution. Is there an easier method?

The issue with just scaling a circle along one axis is that I’m not sure it’s actually making a true ‘ellipse,’ where the distance from any point on the curve to the two foci remains constant. Elongated circles don’t necessarily have this property.

Thanks for your help RickyBlender!

If you scale a circle along one of its axis you get an ellipse, easy.

Intersection of a cone and plane is a beautiful solution, however sourvinos and RickyBlender have the easiest, quickest, most elegant solution for creating an ellipse in blender. Just make sure your proportional editing mode is turned off. Here is the proof to ease your mind: 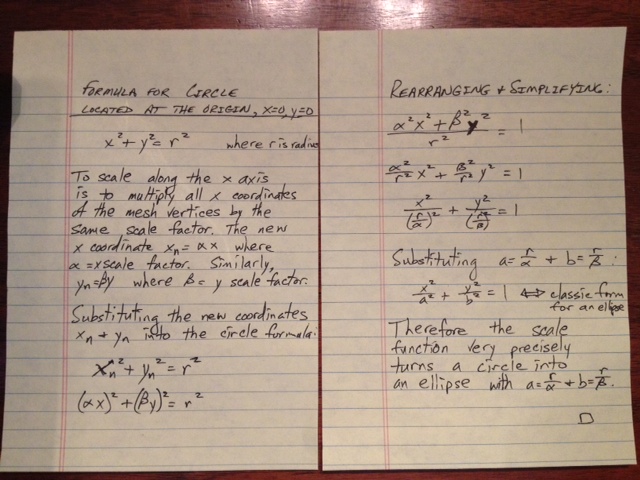 You can also activate the add-on ‘Add Mesh: Extra Objects’ then Add Mesh > Extra Objects > Math Function > XYZ Math Surface
Choose X equation: xcent + a * cos(u)
Y equation ; ycent + b * sin(u)
Z equation: 0
(thanks to wikipedia!)
with :
(xcent, ycent) the centre of your ellipse, equal to (0,0) if the ellipse is in the center,
a the big axe,
b the small axe.

Thanks, everyone! Especially see360 – I didn’t know that scaling in X actually multiples each X coordinate by the same factor. Now that I think about it that’s really the only way that makes sense, just hadn’t realized it. I guess that makes this a pretty lame question BUT in my defense, if you don’t know that’s how the scaling works it IS possible to “elongate” a circle without keeping it an ellipse (if you’re not scaling everything proportionally… should have known Blender is smarter than that)

BoFZeVampire, I’m sure that add-on will come in useful in the future, thanks!

First time poster here. Very pleased this forum is so speedy and helpful!