Well, I am actually going to submit my entry.

I have been having this idea for some time now and this contest has given me the push to get started on the project.

There is a podcast I listen to called the Dunesteef Audio Fiction Magazine, and one of the recurring Characters on the show is a robot named RO8OT.

I decided to bring him to digital life.

My idea was a cross between K-9 of Doctor Who fame,and an MSE6 droid from Star Wars. I also wanted to incorporate some audio equipment in the design and so of course I decided to make his main body resemble an old fashioned boom box.

I began by modeling a rough idea of interpretation of a boom box: 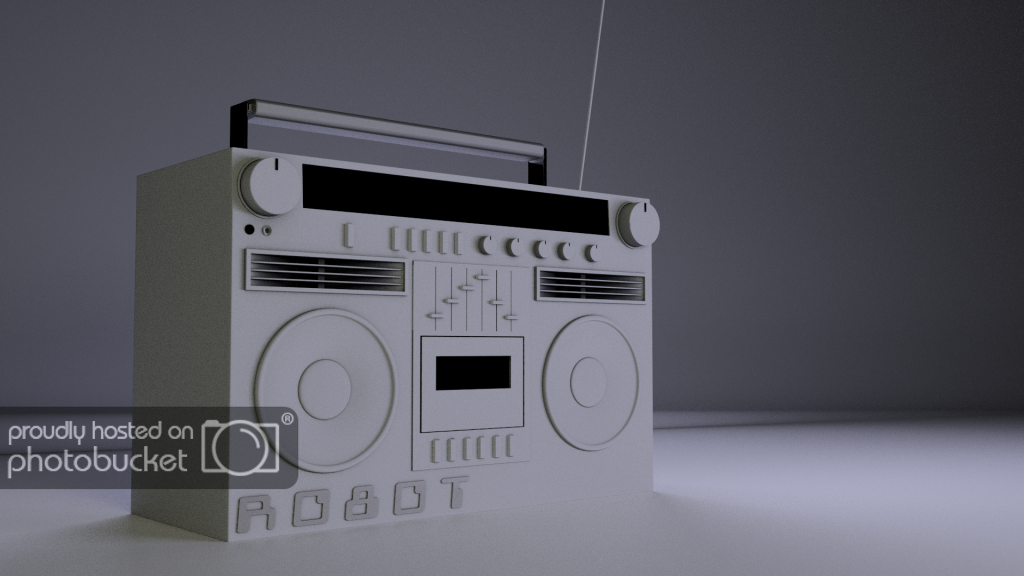 I wanted a bit of a unique look to him rather than the squared up shape of a boom box and so I used a lattice modifier to deform the shape of the boombox to test and see what the results would be: 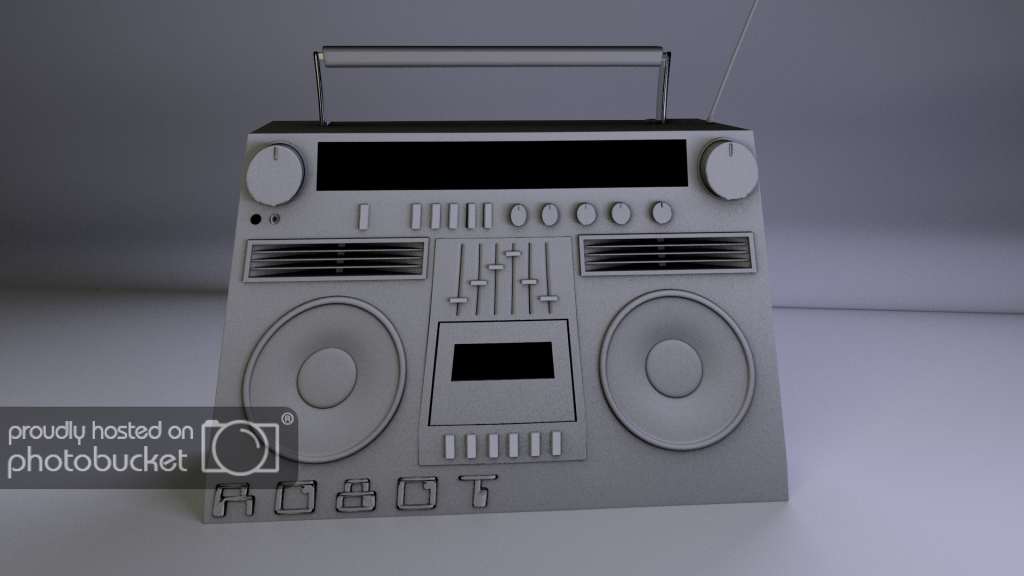 I was encouraged by the results and so did some tweaking of the lattice and the base mesh, and then added a few necessary bits and rough out the basic shape of my robot: 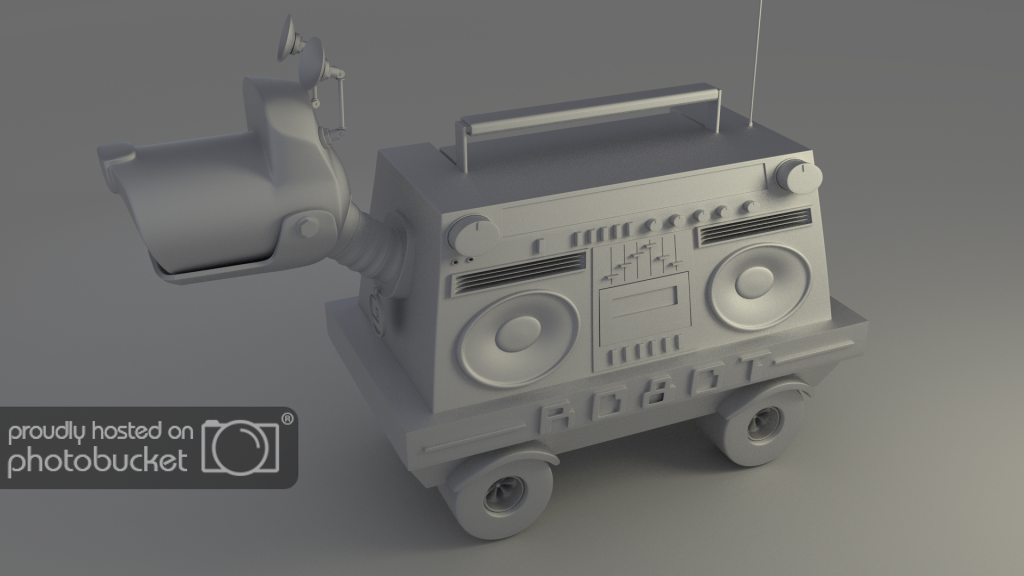 EDIT:
Here is an update showing my progress so far: 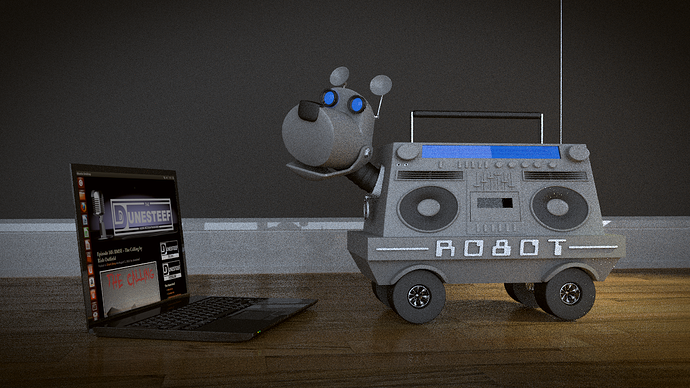 I started adding a little more detail here and there and then fleshing out some of the material a bit: 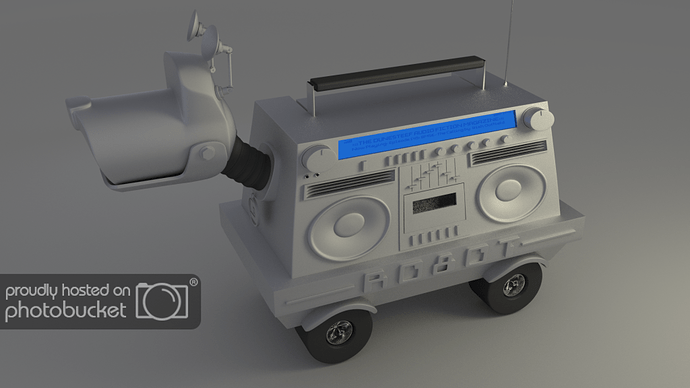 I added some simple eyes and other small details next.
I debated going for a metallic look that was a little on the worn down side, but then decided to try out a material that reminded me of EVE from the movie Wall-E: 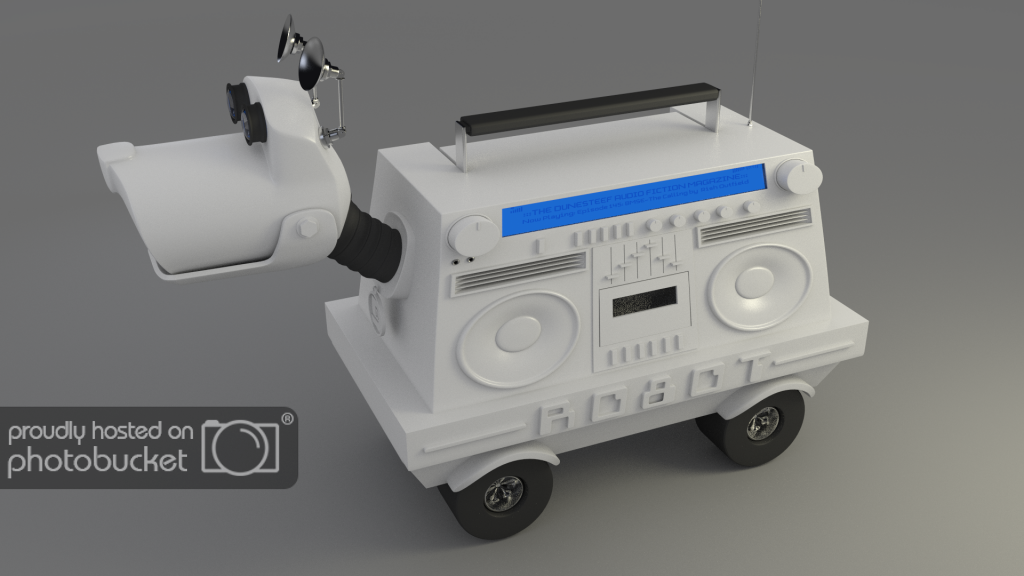 I then tweaked the material a little more, including adding the logo for the podcast as the robots collar tag: 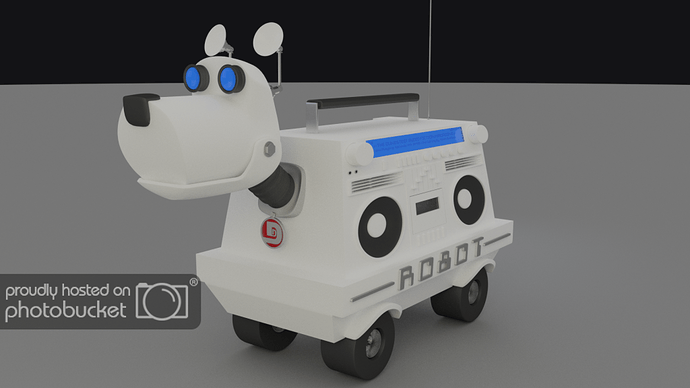 And because I got tired of looking at him on a plain background, I put him into a scene that is close to what I think I will finish with: 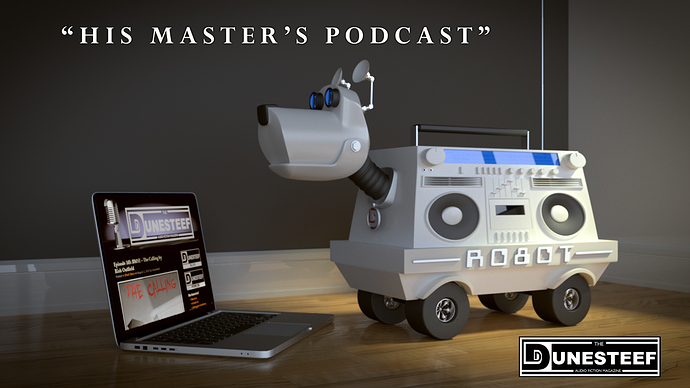 As you might recognize from the final (so far) image, I was going for a play on the old ‘His Master’s Voice’ advertisement.

His Master's Voice (HMV) is a famous trademark in the recording industry and was the unofficial name of a major British record label. The phrase was coined in the 1890s as the title of a painting of a terrier mix dog named Nipper, listening to a wind-up disc gramophone. In the original painting, the dog was listening to a cylinder phonograph. In the 1970s, the statue of the dog and gramophone, His Master's Voice, were cloaked in bronze and was awarded by the record company (EMI) to artists or mus...

There are still a few things I want to tweak and detail out.

The first being to rig him so that I can tilt his head like one would expect a dog’s head to tilt.
I have never rigged anything prior to this so it still has a daunting feel for me. I guess I will just have to jump right into it.

So I have done a little bit of rigging and added an armature to control the nodding and rotating of the head. It was my first try, but I am pleased that it worked the way I thought it would. That being said, I Want to add an armature to control the closing and opening of the handle that is on the robot’s back. Also, I want to rig it so that the antennae-tail can be wagged, and raised and lowered.
I edited the mesh a bit and deleted a few unnecessary edge loops removing almost a third of the vertices. I also made the handle taller so that it would actually close in the slot that is modeled. Additionally, since I used the lattice modifier on the main body only and not on the handle, I needed to rearrange a vertex or 30 so that it would still open and close properly.

I still want to add some more detail and am thinking of putting eyebrows using some type of shutter like Wall-E has. Also perhaps some type of teeth or detail on the front of the snout that would act like a speaker for when he talks.

Thoughts or suggestions?
Comments of any sort?

I cleaned up the mesh a bit more, marked seams all over and unwrapped the robot. I then switched over to the Blender render engine for a bit and baked an ambient occlusion pass on it as David Ward demonstrates so well in his latest tutorial series.
Here is a link to part 13, where it is demonstrated:

I took that image into Gimp and tweaked it a bit, and also added a bit of detail for the equalizer and ended up with this image: 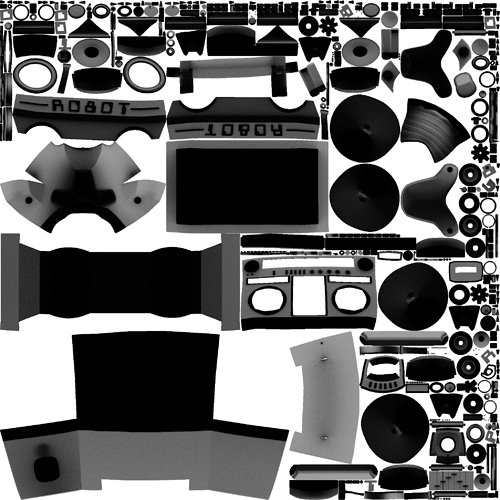 I mixed that in with the main shader, in order to bring out a little more detail on the model.

I reposed the robot and this is where I currently am with this project: 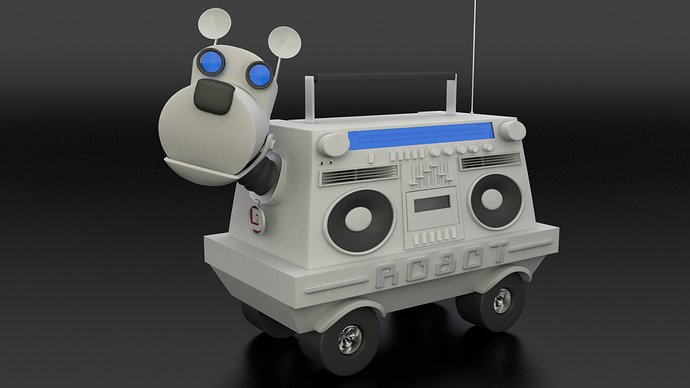 I noticed that part of the bolt on off-camera side of the jaw do not move with the bones and I still have to fix that, but since it is off camera, it’s not noticeable in this picture: 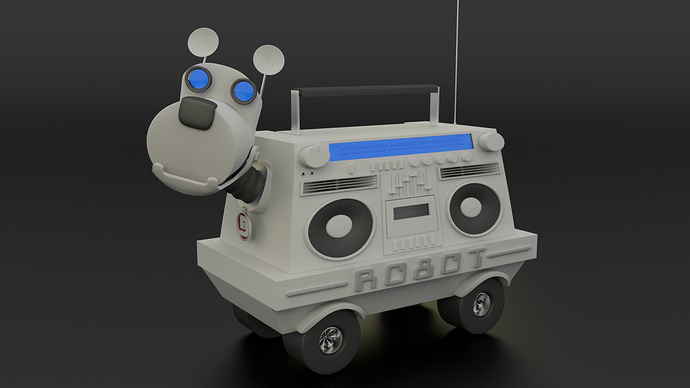 I made some changes to his mouth and added what kind of look like teeth to the lower jaw. I am not sure that I like it. I tried putting vents in the front of the snout or some type of lines there but it took away from his smile and I went back.
What do you think? Leave the modification on the jaw, or put it back to the way it was?

I decided to take the teeth off of the robot’s mouth and think I will most likely leave him as he is.
For the rest of the scene however, I need to replace the laptop as the one I used earlier was a borrowed model.
This is a screenshot of where I am on that part of the project. 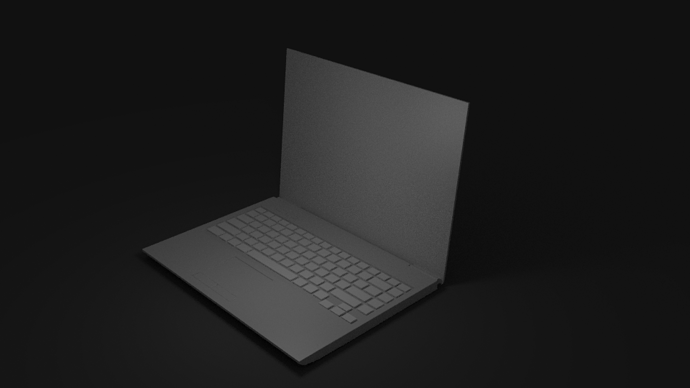 A little more progress made.
Got the keyboard texture in and added some material for the laptop shell.
Also, I defined the edges of the screen for texturing later. 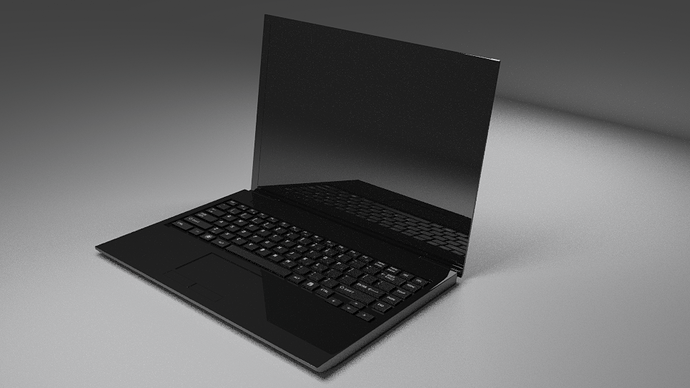 Added the texture for the screen and refined the material on the case.
Still need to add a few ports on the side of the laptop but I think I am pretty much on track. 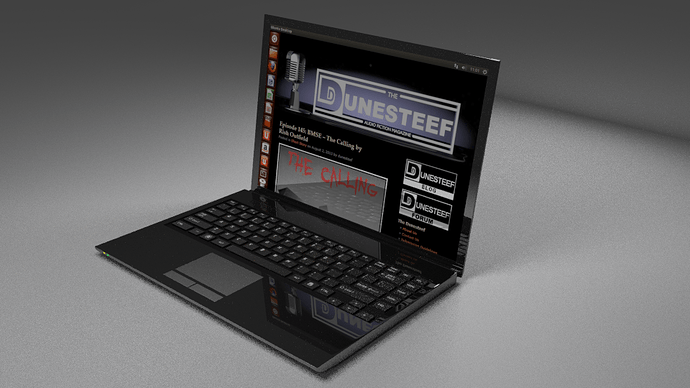 Here is a shot with the laptop and robot together in the scene.
This is ultimately the feel of the look I want but would love some comments and suggestions about the composition, or anything else that strikes you about it.
The render is only with 40 samples because my primary focus is on how things are laid out.

I rotated the camera a bit from where it was in the shot with all elements combined before.

I am thinking about putting something under the laptop to raise it up a bit.
maybe some books, or even a coffee table?
Perhaps a couch against the back wall so that it adds more detail to the scene?

My original idea, and the one that still holds is a play on the old advertisement “His Master’s Voice”.
Here is the image from the site located here:

His Master's Voice (HMV) is a famous trademark in the recording industry and was the unofficial name of a major British record label. The phrase was coined in the 1890s as the title of a painting of a terrier mix dog named Nipper, listening to a wind-up disc gramophone. In the original painting, the dog was listening to a cylinder phonograph. In the 1970s, the statue of the dog and gramophone, His Master's Voice, were cloaked in bronze and was awarded by the record company (EMI) to artists or mus...

Here is the final image submitted for the contest: