I know, this is a Really basic question. But I can’t find the answer!

The noise is too even, I want to play around with plugging in a few different things, maybe even create a network of nodes.

So I’m looking at my texture tab. It says Texture, clouds, at the top it say Displace.
I pulled a new window down and changed it to Node editor, expecting to see that node. Like I said, I don’t really know much about some of the really basics. Every tutorial I’ve done so far I just follow along and it works. I’ve never had to note what is going on. Finding ones on the node editor is usually just showing how to do complex shaders. I know that part, I need to know how to get around!

I also expected UV map to show me something, but I get nothing.
I added a material, and that comes up, with the noise texture I added, just to be sure things are working ok.

But when I add a texture to something like a modifier, how the heck to I get to that in the node editor?

i’m not sure about what i’m going to say but :

you can’t use blender’s texture in cycles nor eevee ( for now )
if you’re using 2.79 you can use them with blender internal

Well that’s not actually correct?
The texture is working fine. AFIK all of the built in procedurals are compatible with both cycles And eevee.

Anyway, the question is how to show it in the node editor. That’s what I have issues with. I’m also not Rendering the texture. I’m using noise to control the geometry modifier for vertex displacement only. This happens before the render engine sees the geometry, and it only looks at the end result. I can even export that geometry (in fact this is what I intend to do) to something else, like Keyshot.

that’s what i’m telling you ( even tho i’m not sure because i never saw someone do it ) , you can’t use those build in texture of blender in cycles, when you make a texture the node should come up in the texture node editor 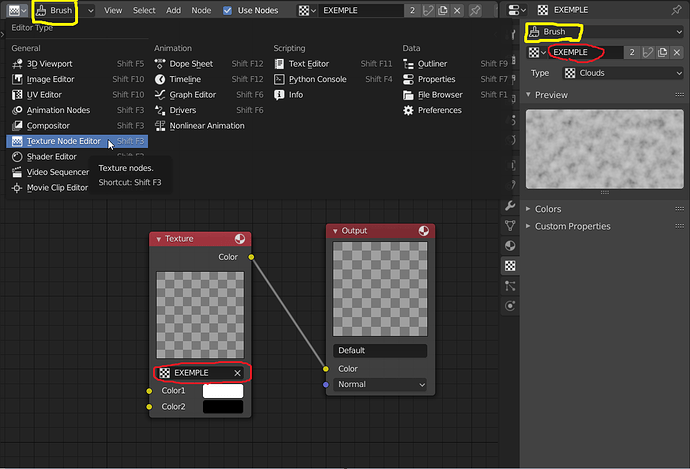 EDIT : you can read here that what you want to do is a proposition for the google summer of code project

" * Benefits : Use the same Cycles and EEVEE texture nodes everywhere in Blender.

OK, I am definitely asking the wrong question then. Because it really seems that you can use the built in textures. I just can’t figure out how to control them.

I created a displace modifier, and created a new texture.
Then I went to the texture tab, and there it is. I can control it. And it works.

But it doesn’t look how I want. So I wanted to mess around with adding different nodes together.

I can’t figure out how to show those nodes. I’m using blender 2.8, so the regular blender render isn’t an option. And I’m not sure what “workbench” is yet.

I might just be going about some of this wrong. Am I wrong in assuming if I create a texture, say in the modifier menu of an object named Cylinder.01, I should be able to use that exact same texture node in a material that happens to only be applied to Box.04? Just an example, but I wanted to be sure I was clear.
In keyshot, this is Not possible. Every node Only exists on one material. But in Maya, you can Pretty much plug anything into anything else, if you use the right conversion. It all exists at once in the outliner. So you can have the color.1 of a noise effect the height of some box object if you want. I was under the impression that blender worked like that as well. But I have a really difficult time searching for that kind of information. Pretty much the only things I’ve been able to learn, I’ve learned directly in tutorials. If I have a question, I’m pretty much hosed. I haven’t learned UV mapping yet, because everything I’ve found does the same things the same way every time. But I want to learn how to just fix a little something. I’m not starting from scratch. I just have a couple overlapping pieces to fix from a different software. That’s surprisingly difficult to find. Most everyone is just showing things like fire hydrants, and how to unwrap them (usually using automatic tools)