Creating a walk cycle relative to the ground

Hi. I have been trying to do some character rigging and I am fine with it all except creating a walk cycle effectively so the character can move forward, whilst walking and the feet appear fixed firmly on the ground - so when you walk, you move one foot in front of another but the bit im talking about is the brief bit where your foot is on the ground while the other foot is moving forward.

Is there a relatively easy way to make the character to move with the walk cycle so the feet appear firmly fixed on the ground when they touch it as opposed to the character appearing to ‘slide’ over the ground a bit? I cannot find any tutorials on this.

Any help would be appreciated

Use foot IK target to fix the foot. Only problem with this method is that you will need to key frame each and every foot steps.

And even using foot IK you’re going to have to watch your toe rotation to make sure the toe doesn’t sink through the pavement. It’s only relatively easy depending on your definition of “relative ease.”

You can move the character’s root bone along a path, and adjust the timing so the feet don’t appear to slip (too much). This method is tricky, too.

A lot of animators cheat: they don’t put stuff on the ground near the feet so it’s hard to see the feet slipping (these are often shots just showing the feet, close up, from a low camera angle), then they cut to a shot showing the character from the waist up. Or they show the characters walking in a long establishing shot where details aren’t as obvious, before transitioning to a close up that doesn’t include the feet. Or (you see this a lot in anime) they make slippy feet part of their animation style.

That’s great thanks guys. I will play around with both. the foot ik sounds like a good idea but i hadn’t thought of using a path. Would I need to parent just the root bone to the path, or the character mesh too? 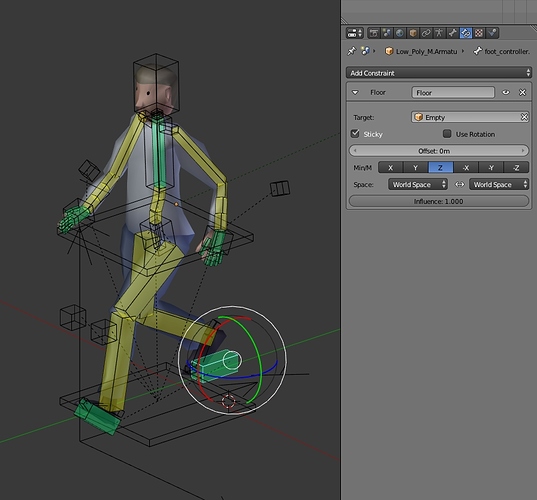 sticky bone constraint.jpg896×834 179 KB
You could use the ‘floor’ constraint on the foot IK bones. Here I have the foot IK targets parented to the COM bone at the bottom which moves the whole character. The empty (the axis object here) is set where the “floor” should be, and a Floor constraint is applied to both IK targets, and set to “sticky” so that when the feet intersect the plane of the floor, they stick in place. You have to be careful with this though, it has a tendency for the bones to “pop” back when they pass back up off the floor, but this works well for walk cycles. You can turn ‘sticky’ off and the feet will stay at floor level, but still slide around a bit, depends on how close your shot is to the character

I hadnt thought of constraints…I will remember this. It works well in your blender file. Is the COM bone the root bone or a different one? cheers

Great tutorial, never knew it could be that simple! I couldnt find any! Cheers mate

I hadnt thought of constraints…I will remember this. It works well in your blender file. Is the COM bone the root bone or a different one? cheers