Trying to get some jiggling text.

The first letter has a noise modifier on a single keyframe. I’ve been trying to achieve a similar look with geometry nodes and then have that automatically randomized on each letter.

Can anyone suggest improvements. Biggest problem is the other letters don’t stay constrained to a sensible region like the first letter and the further away from the origin a letter is, the slower it moves.

you’ve got some strange type conversions going on there, and I’m not sure how they are being resolved. In the variety motivator section, your location from the object is being converted to a float, which is probably why the motion is slower for the further objects. You are then multiplying that float by the frame (which is reasonable) but then it is plugged into the vector socket on the noise modifiers, so it is sampling in a weird way. you can set the noise texture to 1d mode if you want to get some noise that way.

The object location in the ‘location’ frame is being subtracted, from itself? so that’s doing nothing.

Here is how I went about it: 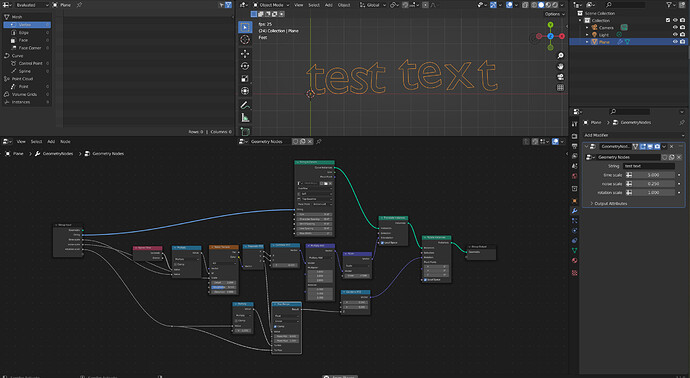 This accepts text directly into the modifier, so if you need the letters as separate objects it will take some rejiggering

so if you need the letters as separate objects

I finally got it to work with other objects. Had to put the objects in a collection and then instance them along the points of a mesh curve in order to then be able to plug them into the Translate Instances node. That was quite unintuitive and I couldn’t think of anything else to try.

I played with the settings for a long time but nothing really came close to the noise modifier keyframe look so I stuck with that (sooo annoying to setup on each letter).

And now that I have all the letters moving it turns out I don’t like the noise modifier look either, so back to playing with Geometry Nodes again.