I am a complete beginner with Blender. I have gotten into it because I want to create quite a number of toroidal meshes & objects. I wonder if someone with experience could help me choose an appropriate method for creating them.

I think I can define what I want to do but have no idea how to go about it!! Here is my explanation. I want to:

2 Define along the paths changing diameters for the toroidal object to be built around the central axis.

Just wondered if anyone had any ideas?

If you can attach a sketch of what you are typically expecting to see it would be more helpful.

Thank you for your helpful contribution.

Sorry I do not have a sketch but I will try and describe my target in a little more detail.

I feel you are pointing in the right direction for my purposes because the models do lend themselves to mathematical description. However when the model is fully described it needs to be converted into a reasonably fine mesh.

Toroidal object is, in their basic form can be described as a continuous circular tunnel - rather like a bagel (which is in reality not normally a circular but an elptical. The toroidal objects that I want to build are continuous solids or tunnels which maintain an open space around them! If you could get inside the “tunnel” there would be no way out. You can only go round and round within the continuous walls.

So the basic model is a tube following a path that loops back upon itself where the end joins back onto the beginning! In its most simple form the path of the toroid is defined by changes to its x & y axes whilst the z axis remains constant (e.g. a bagel). However for my purposes I also need to be able to change the z dimension. So the first step is to define a path (the toroidal path) in xyz dimensions and deduce a linear path index which can provide a reference for the second step.

This leads me to the second step which is to be able to define the outer shape relative to the toroidal path and modify those dimensions by reference to a linear path index.

The third step would be to create a mesh and then manipulate that mesh to create additional features.

I then see the linear path index being used to control lighting and other tools.

At some stage I need to map photographic images to the surfaces.

I hope this explains what I want to achieve in a little more detail.

i think that should do the trick!

Sounds right - how can I get a leniar path index and then make dimension adjustments depend upon a formula that changes with the distance travelled along the toriodal path?

so i think you should go to the python forum and ask the question there!

Thank you - for that… is there a particular forum you would recommend?

and one of theses is the python forum
so just ask a question there
http://blenderartists.org/forum/forumdisplay.php?f=11 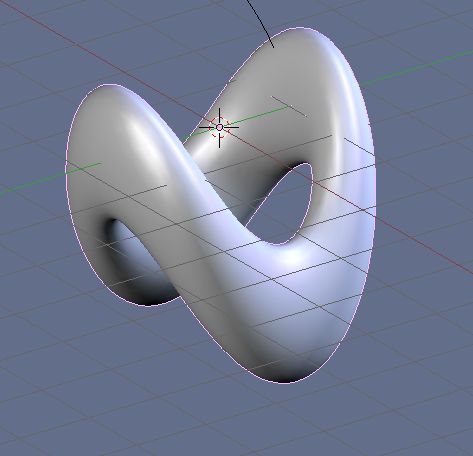 another way is to add a curve as a path (defines the overall shape of the toroid) and another curve as bevel object to the first. the second curve then forms the cross sectional profile of the toroid.

the shapes of both curves are editable, (even through ipo control)