Let’s get the thread started!
Today I downloaded 2.8 to find out that on the passes property tabs, I can already see the Cryptomatte’s attributes for Object ID and Materials!
I did a quick compose, and I see the Cryptomatte (picker) node to isolate the material or object, but I can’t seem to make it wok just yet. Anyone has had better luck?

I had some luck:
a) Enable Cryptomatte renderpass: 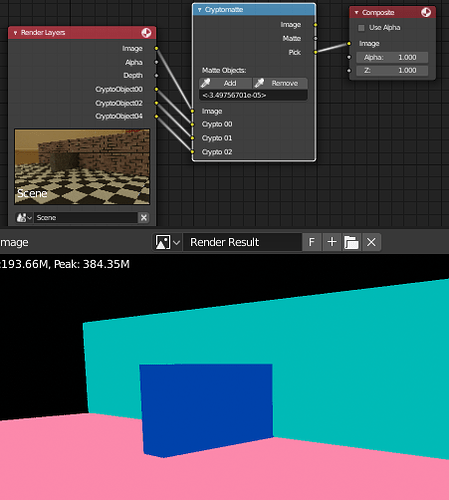 c) Use now the matte output : 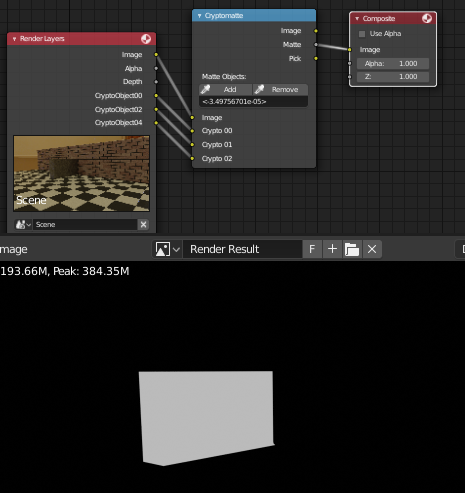 And there you have your mask.

It’s working perfectly so far. There are a few caveats though that I partly mentioned in this older Cryptomatte thread.

I suppose if you only composit in Blender, it doesn’t matter what the fileformat / output is, not?
Example usage: 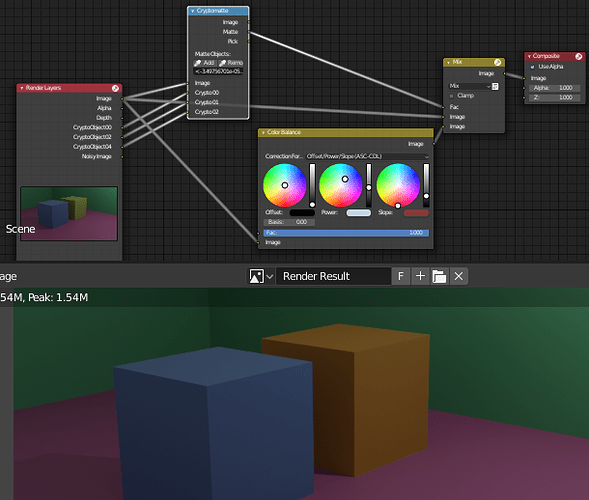 Yep, the additional information in the EXR header that is expected by other Cryptomatte implementations as part of the spec is still missing (will hopefully be added later).

Sure. As long as you don’t output any rendered image to a disk or server all is fine automatically because it’s containing the full information. But if you e.g. render on a farm and plan to do your compositing afterwards you should make sure you save to a format that supports all the features.

@SteffenD I just implemented the metadata output in D3862 but I can’t really test it outside of Blender, could you try opening the EXR I attached there in the tools you mentioned?

I gave it a quick try and besides Blender Compositor only Fusion 9 (with the official plugin from here https://github.com/Psyop/Cryptomatte ) recognized Cryptomatte layer correctly.

Here cryptomatte used for every object. The result is good, but (this) gif amplifies smal artifacts which you normally barely see. You notice a little bit of jagged edge in the middle chair on the left. And when edges of two objects meet, this gif shows some white pixels. But if you don’t go crazy with compositing (turn objects very dark) and you save under higher quality then gif, I suppose all will be ok.

Thanks for the test! Does this official example work? That’s the one I used as my reference.

Just gave it another quick try and yes, it works in Nuke, Fusion, Houdini and Blender.

Okay, I found the problem - the metadata didn’t include the RenderLayer name as part of the pass name.

However, there’s another issue: Nuke apparently doesn’t like the Layer.Pass.Channel naming scheme and changes it to Layer_Pass.Channel, so it only loads the Cycles Cryptomatte if I output the metadata with that naming scheme as well. However, other software might not do that and then in turn be unable to find the “RenderLayer_CryptoObject” pass. And if I output both, Nuke stops working again…

Not really sure how to fix this, I’ll have to think about it.

From what i gathered, it’s risky to use dots in naming scheme. Underscores are safe & standard naming convention all over… Never had a problem with _ , while on the other hand . . .

Does anyone have the same problem as the following image when dealing with heavy DOF? 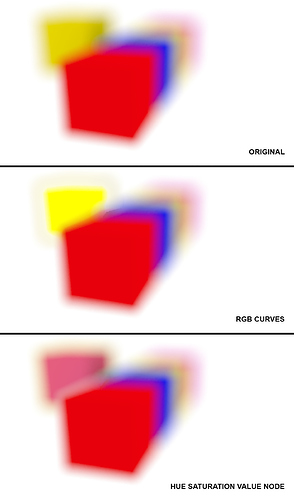 I think this is a typical corner case where no mask in the world would be “good enough” because there’s a lot of pixels that contain an overlap of two objects with completely different hue.
The compositor sees only the resulting color per pixel but not the different ingredients that form this color. Red and Yellow mix to some sort of orange but you simply can’t tell the HSV node to only affect the yellow part.
It’s a bit like trying to make a cow from a burger again.

I had some luck:
a) Enable Cryptomatte renderpass:

And where is that Cryptomatte enabling option???
(using blender-2.79-c0b3e3daebd - 30th Oct - cryptomatte node is there but…)

Hi. It is in Render Layers tab.
See here: