Recently I have had a thing about making glasses with liquid and scenes like that in Cycles render, most recently I finished making a beer pint, which so far has been turning out quite well, now I want to try something different… This question doesn’t just apply to this, but glasses of all shapes and sizes of the same nature, I am wanting to make a classic lowball glass, but not just a plane glass, a crystal glass, more specifically in the style of Waterford crystal.

If you are not sure what I am talking about, here is a link: http://dyidi5w9ob9ji.cloudfront.net/wp-content/uploads/2014/04/Marquis-single-450x450.jpg

Any ideas on how to model the glass with the indentations?

Any assistance anyone can give me for this would be a super big help! Thanks!

In essence, it looks kind of similar to what I did here in this swirl pattern glass: 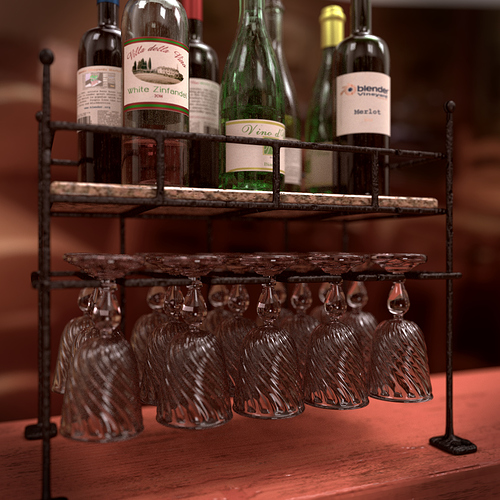 Essentially what you would need to do is extrude some faces, but instead of doing it outward, like I did in the wine glasses here, you would do it inward. The other thing of note is that instead of being spread out, it seems as if the indentations are coming from a single “point”. That might take a bit more effort on setting up the model so that you can extrude those faces inward and maintain good edge flow, but it should be completely doable. You’d want your faces that are going to be extruded inward to be following along the pattern. Once you have those faces in place, a simple inset will give you the depth.

One thing to keep in mind is that this pattern is ONLY on the OUTSIDE of the glass. The inner “bowl” of the glass will still be smooth.

Since the pattern seems to repeat around the glass, you might set up one “side” and spin it around to form the full glass. I think that might be the easiest.

Hope this helps some!

Okay, I will attempt both methods at some point in the near future! Thanks for the input guys, will be helpful!

The issue is no matter what I do, if I make the base as part of the glass or as a separate object, I either get artifact-ing or a line though where the top of the base is. Any ideas on how to combat this? Thanks

show us some pic of what you get !

This is both a rendered view and an unrendered view. Right now just staring out simple, later I will also be making ice cubes and a bottle of tonic water to add to the scene. 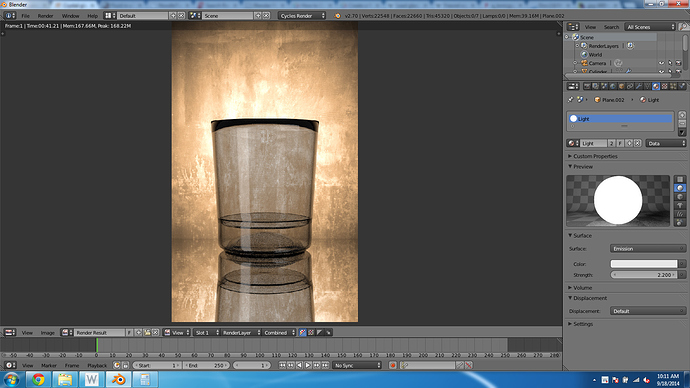 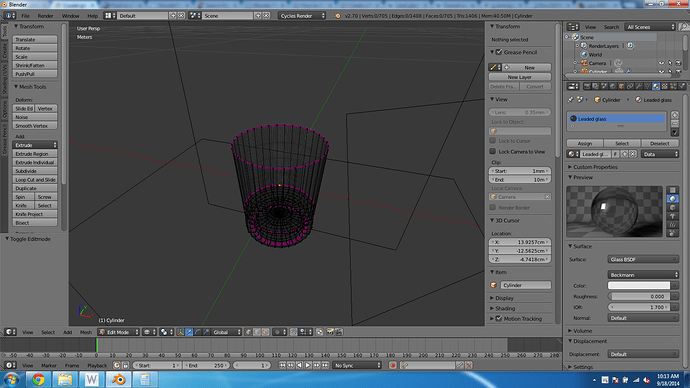 did u check the normal double verts ect,

I assume it is probably something simple that I am overlooking. I tried recalculating normals and that didn’t seem to help. Haha

what is the 1/2 height surface
is it your glass’s bottom or level for a liquid ?

another thing is you did not add thickness to your glass so the refraction will act only on thick glass not single plane glass!

but depends what you want to do

The lower portion does not have a solidify modifier.

The glass has a solidify modifier set to 2.3mm

ok but is the bottom part glass or liquid ?
also you IOR is way too high for a glass !
so this might generate some dark bands from refractions

what is your goal to get very clear glass or glass with some refractions inside ?
to get no refraction set ior = 1.0
then it has a lot less refraction

The bottom is glass also. I am setting my IOR according to what the IOR is for leaded glass (which is 1.700). I will try setting it lower, and maybe that will help.

Setting the IOR down lower didn’t seem to do anything.

You can’t use the Solidify modifier on a mesh like this, as you have non-manifold geometry in there ( = more than two faces share an edge) - this occurs where the bottom and the sides meet. The Solidify modifier can not resolve this in a sensible way for the glass shader to compute refractions correctly.

When using refractive shaders, always model objects as they are build in the “real world” and you will get the result you expect: 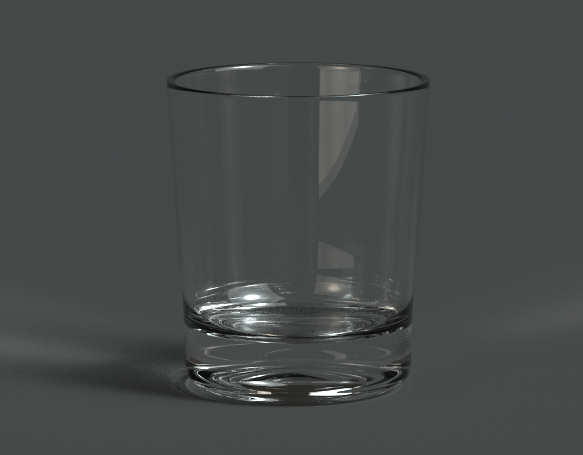 So, from what you’re saying, I should skip the solidify modifier, start with basically a circle, extrude inward slightly to create the walls?

You can use your existing mesh:

Or start with a cylinder, scale the upper faces up a bit, inset and extrude down.
Or create the outline of the glass walls in side view and spin.
Or…:eyebrowlift: There are always multiple ways to skin a cat.