I’m new to Blender and new to this forum. I’m actually a communication design student (I mostly make brochures and print ads, some magazine layouts here and there) and I’m very interested in 3D modeling. Never got the guts to try it out before coz I heard it’s very heavy and since I’m working on a mac, not many people recommend me working with 3D. Until I heard this very lightweight software, Blender, I told myself, heck, why not

So this is my very first character modelling (and rigging). I’m very helped out by Jonathan Williamson’s, Karan Shah’s, and David Ward’s tutorials at BlenderCookie and CGtuts; not to mention almost every character models over the Blendswap that really helped me out with topology and stuffs, coz being a communication designer, I’ve never had to deal with anything related to 3D.

Oh, holly’s & Sand3’s discussions about anime hair (I couldn’t link it for some reason, got denied) was very very very helpful with the hair, coz I’m starting to think that maybe I need more time before I can tackle the particle system. I spent like almost a whole day trying to get the particles right for the hair. So for now, I’ll stick to polygons hair ^^

So here she is, her name is Crystal. I made her heavily based on Vanessa Schneider of P.N.03. I didn’t really get all gaga over the details so you can see, she’s fairly a simple polygonic bionic woman :B oh and she was meant to be some sorta African-American girl, with some Asian heritage, sorta like Amerie.

Didn’t know how to use normal maps, so I kinda didn’t get to the suit details. I want to, but for now, I kinda want to leave her at that coz she’s getting really complicated and my head will burst if I ever touch her again (not in a dirty way, if you know what I mean o.o)

I want to put her up for examinations but she’s quite big, I don’t know why, almost 2MB (I wasn’t kidding when I said complicated) so I cannot upload her. Perhaps I’ll put her on mediafire later if someone is willing to take a look at her and lemme know where I did wrong 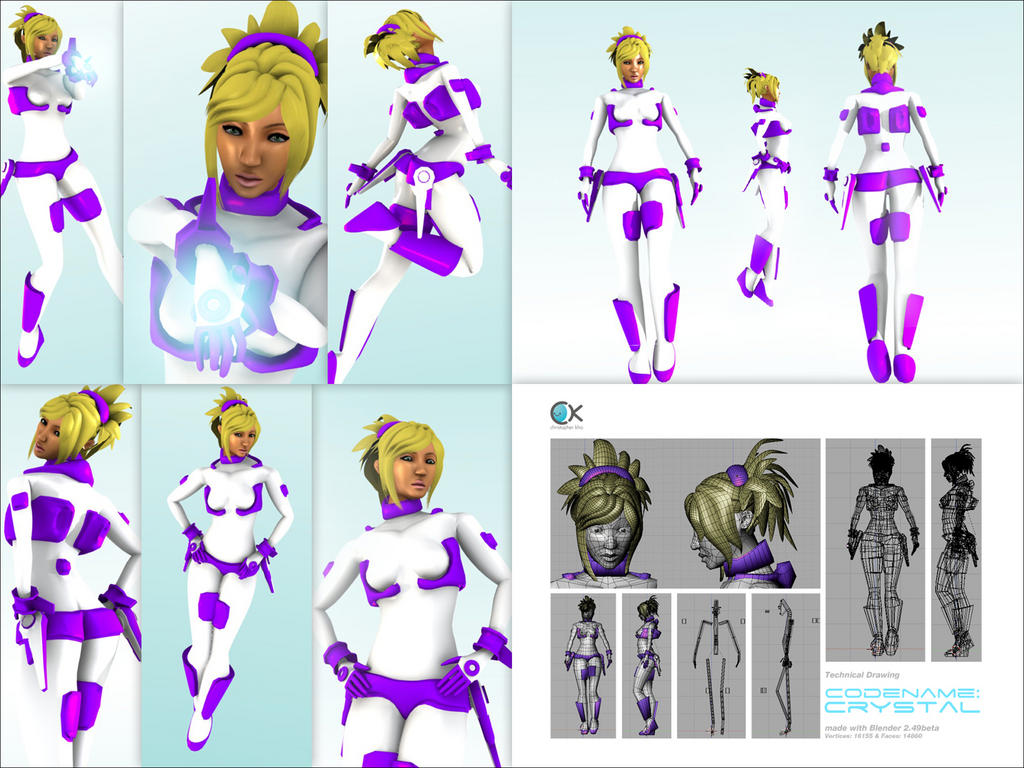 I have some other models that are currently finished but idk if I’m allowed to post another thread or have to fit them all in one thread for myself. So for now, since she’s my first work, I’ll just put her up here :B

For a first character your off to a great start.

If you want more comments on the quality of your modelling/topology it would help to have a larger image of just the wireframe views. You may also get more help if you plan to do more with this model in the works in progress section rather than finished projects.

With normal maps start with normal_maps_blender_2_5 and tangent-normals. They show using a sculpted mesh to create a normal map, but you can experiment with drawing your own image to be applied to the normals.

There is an option to compress the file contents which may help reduce the file size, but the more vertices, materials, bones etc the bigger the file.

As for your other models you can lump them together into one thread if you wish to let others see them, if you want specific help on each model it would be better to have one thread for each model.

Very nice for a first character

I think I’m just gonna leave her at that. I don’t think I’ll ever touch her again, she’s just way too complicated for me as of right now (hence my first work) but thank you for your comments

and thank you too for the links, LoopyShane. I shall try it out on other models.

Very nice, you’ve put a lot of work into that. How long did it take?

Thank you ^^
I think around a week or more :S I got a lil stuck with the hair at first but I figured out a way out. :B

I’d like to take a closer look on the wireframe, since one can’t really read it well from the shot you provided. From what I can tell from the small pic, her skin material seems to be way too glossy, and actually, I don’t think there are any real materials used besides the basic colors? Those purple things on her suit look too blumpy and lack any definition and detail.

Also her asscrack looks weird from the rear shot ¬_¬

From a distance shot, I think that she looks awesome! Although her basic suit design makes me think of Zero Suit Samus’s suit. I also like the whole concept that your were trying at. By the way, does her hand just glow, like a flashlight, or does it shoot some sort of beam? Either way I still love it! What really impresses me is that this is your FIRST model! I haven’t had that much experience modeling in Blender, but its better than anything I can do at this point. Amazing job!