Update 6/something/09:
New, contest release version with 1 more level and a basic menu. It can be downloaded below. I planned on having 5 levels completed, but I procrastinated and ended up only finishing one. I may finish the remaining 3 levels after the contest.

The game runs in 2.49 in Texface mode only! GLSL will work, but probably will look funky.

The controls should be self-explanatory. Note that “LShift” stands for the Left Shift button.

If you use Windows, you may run into the “Stickykeys” popup. I used Shift because of its ability to be pressed in conjunction with most other keys… however Windows might annoy you the first time you do this. When it pops up, just make sure you disable the “press shift 5 times turns on stickeykeys.”

Enjoy! Tell me what you think of gameplay!

Figured I should have a WIP thread for my BGE competition entry like everyone else!

The game will be a puzzle/platformer with some combat elements. Everything is done using logicbricks, no python at all.

As of now it’s got basic movement (though I’ll add the ability to acquire new abilities, like double jump or some sort of ground pound) for the cube as well as fully fleshed out animations. Enemies have a basic AI using states. They attack when they’re in a certain range and will jump over any cliffs or steps to chase you.

Here’s a youtube link of the basic controls and enemy activity. I haven’t quite settled on a visual style quite yet, but now it’s a bit cartooney.

Being a college student, I haven’t had too much time to work on this. However, I do have some basic effects done, as well as the first level. I plan on having about 5 levels done for the contest, each with 3-5 minutes of gameplay.

Here’s a new youtube clip with some highlights. I changed around the colors, and there’s a few more elements. I’m struggling as to what I should make the walls look like… now they’re alright, but I want to change them around a bit. Let me know if you have any suggestions.

Tell me what you think! Rate this thread if you like it! 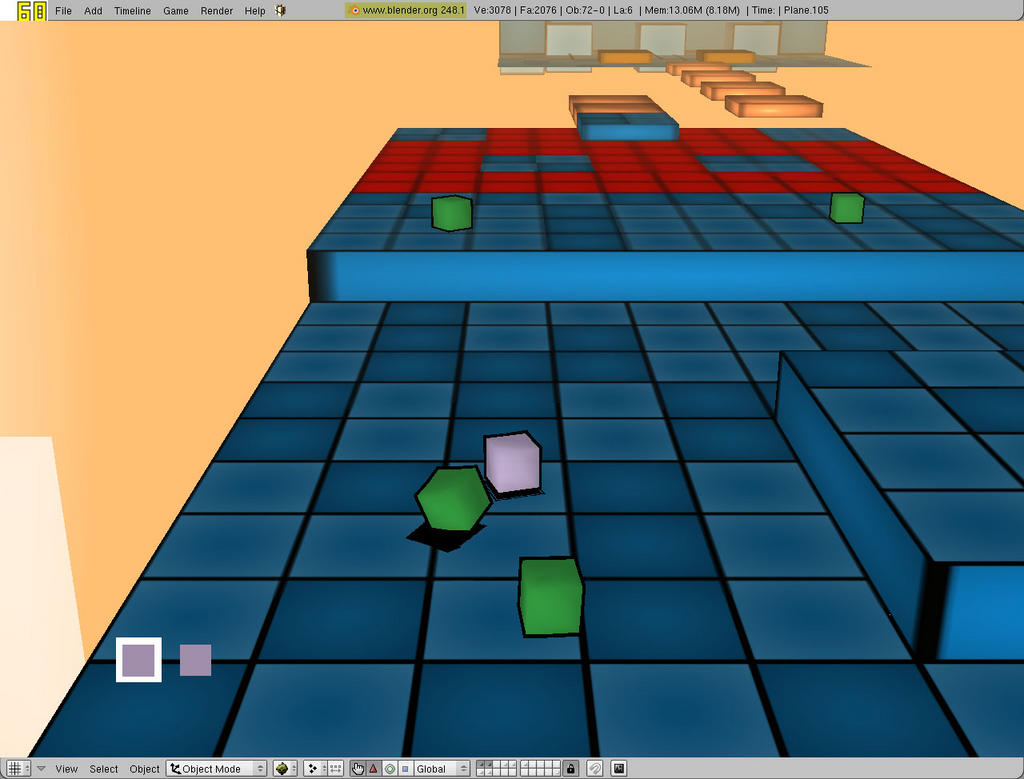 HA HA! That’s pretty good man, looks great! Easy to make, easy to play and suitible for the blender game engine. Vry nice man! Also, if you can tell me how to use filters, with the cartoon ojne you have that’ll be great thanks!

Hello
the setup loooks “neat”!
Bravo!
Now, to make a good/interesting game out of this…be brave!

I like the style of it right now. Looks fun can’t wait to play.

I love the toon shading and the video was impressive, the animations and ‘walk’ cycle especially.

Thanks for the feedback! I’d really appreciate some critiques.

I’m thinking of changing the color of the ground… does it look too bland? I like the soft colors, but I also want it to look somewhat vibrant.

Thanks for the feedback! I’d really appreciate some critiques.

I’m thinking of changing the color of the ground… does it look too bland? I like the soft colors, but I also want it to look somewhat vibrant.

I think it’ll be a good colour for the ground, but if not… leave it as it is! It looks awesome!

how did you add a toon shader without python?

It’s not really a “shader.” All it is the cube model, duplicated, scaled up, set to black and shadeless, and then inverted. See the attached file.

Everything else is just textures.

I like the idea of a blue ground, but I don’t want to overdo the blue. I’ll think about it and post another video, with a complete level.

I like the idea of a blue ground, but I don’t want to overdo the blue. I’ll think about it and post another video, with a complete level.

Well maybe the blue ground could be an under water level, and you act differently under water, maybe you have a time limit that counts down until you drown. Maybe you can have big fishes that eat you. Maybe there could be a whirl in the middle and if you get too close, it’ll suck you down. Maybe there are holes covered with sand, that when you step on them, you die. There are many good, possibilities for an under water level. I know it’s kind of cliche, but they’re fun… The water level is an “idea”, you have a lot of other cool themes you can pick from for levels. Maybe your in space. Maybe in the inside of a volcano about to erupt. Maybe your in a maze. Again there are many possibilities to make this game really fun. so yea… I hope you take these ideas in to consideration.

If the controls are as responsive and fun as they appear in the video, give this game some inspired level design and you could have the start of something very fun!

I’m psyched to play it!

Dude!
I am looking forward to playing this!:yes: