Hello, I’am trying to create something with curve modifier. I’am deforming object along X axis. When I try to move mesh vertices in edit mode along X axis, nothing happens, deformed object still starts at the start of the curve. (See top object in screenshot). I expected, that object’s origin will be used as origin point for deformation. What I’am doing wrong? 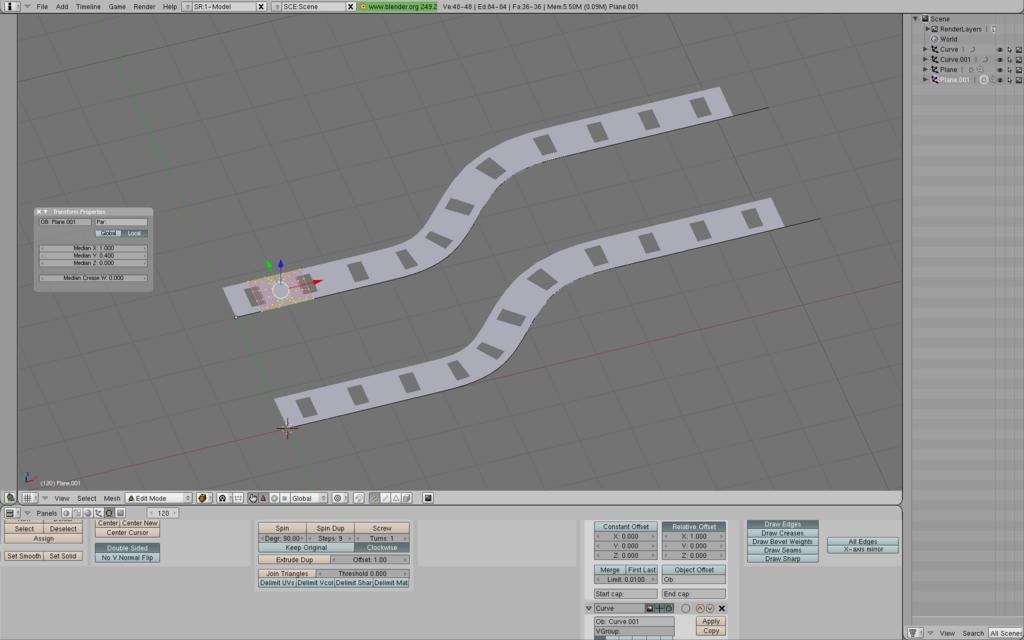 not easy to say what the problem is without more information
maybe it has something to do with the relative positions of the centres of the mesh and the curve?
maybe the curve does not have enough points?

Sure, here it is. I’am trying to select object Plane.001, switch to edit mode, select all vertices, grab and move along x axis. But nothing happens with resulting mesh modified by curve.

ok, didn’t realise the mesh has an array modifier

it does seem strange as you say

if you disable the curve modifier, the mesh points move as expected

not sure what you want to do, but what about moving the curve instead?

Sorry, I was a bit confused at the morning and I answered by mail ;-).

I want to make same result as if I move whole object in X direction (ie move object geometry along the curve).
I’am modelling complex curved thing, which I want to be composed from several object, all with same origin and deformation curve. But when some object geometry starts away from object’s origin, the result is moved to start of the curve and is misaligned. I must have a vertex at each object origin and I cannot have object starting before start of the curve.

Here is a simple example: small rounded foot bridge with columns, bridge desk is one object, columns are another one. When you go to edit mode with columns object, you will see, that there is some distance from start to first column, but columns start from the begin of the bridge in resulted curved object. If I move whole columns object in X direction, everything works fine, but I want to have same origin for all bridge objects. Workaround is to add a vertex into the origin of bridge object, but it is dirty trick…

And second question, I don’t understand, why start and end of bridge desk is not perpendicular to the curve (aligned with X axis) in this example.

Re the 2nd question: It looks like a bug to me.

On the first: If you want the columns starting some distance from the bridge, try moving it in Object mode. Whey this should act like this I don’t know. I agree with you - it should be the reverse.

It looks like the curve modifier does an extra job: finds real start of mesh and shifts whole mesh to zero (in axis used for deformation). I don’t know why and I don’t see any posibility how to switch this off.

Looks like the developers were extra helpful in this case.

It’s there in 2.50 too.
Perhaps you should file a bug report.