Would like to share a custom build that includes all the latest 2.79.6 features (AO, Bevel etc), Weighted Normals modifiers by Rohan Rathi and several hackish modifiers by myself that have gone through quite a lot of production (gamedev). These include:

Displace, Bevel modifiers have been altered to work with Thickened Curves.

Build modifier can be renamed to “Weld” resulting in remove doubles functionality. For myself I use it with Bevel after Boolean workflow as it reduces some errors. To my understanding 2.8 Bevel might have it built in.

Split normals modifier can be used to Amplify normals. This is very useful when working with game geometry (in particular holes, screws etc) and strong parallels can be drawn to DECALS workflow.

For example suppose you need a hole in your geometry - you can cut a Sphere in half and export for Bake in SP. You will have to use very large bake distance that will likely cause artifacts elsewhere on bake and AO map, Position etc will all be messed up. With such workflow it’s easy to avoid and all bakes come out nicely.

Example of Displace on Curve with UV scaling:

Example of UV scaling on Curves used on wires to tile Texture. Also Displace on Curve is Blue part (Voronoi): Usage: As can be read above most alternative modifier functionality is triggered by altering it’s name (strstr()). It is not quite as intuitive as some would like(e.g separate modifiers), but most of this functionality was created for personal use as experimental. To maintain separate individual modifiers would require 10x the work. Snippets are usually in modifier name.

Please consider that these features are experimental. If you plan to render it with renderfarm, share or open with different blender ver, work that uses custom functionality will be lost unless collapsed.

/////
Motive: I am hopeful that if this catches glimpse of developers, then these features can be integrated professionally into official build. Most of these modifications are a few lines of code and would most likely take a few hours for professional Blender developer to do decently.

Few more ideas I would like to attempt later or requests if someone is kind enough to take a jab at them:

I love it, made 2 videos about that build!

Array should have Radial Array option

Maybe you could use Circular Array modifier code?
https://developer.blender.org/D3206

You’re my hero! Thanks for sharing, gonna use it daily.

Hmmm, for some reasons I cannot change the windows layout by dragging corner. Gotta be the issue with some
addons

Thank you ZenYS. No idea why, works fine here.

@gorion103, Charlie. Thank you for sharing the Circular Array link, it could come handy! I had already managed it once, but reverted to using Python script for compatibility reasons, which is why I think Circular Array should be official feature as most users have to do this timeconsumingly and manually.

For example, imagine setting this up without a single script: 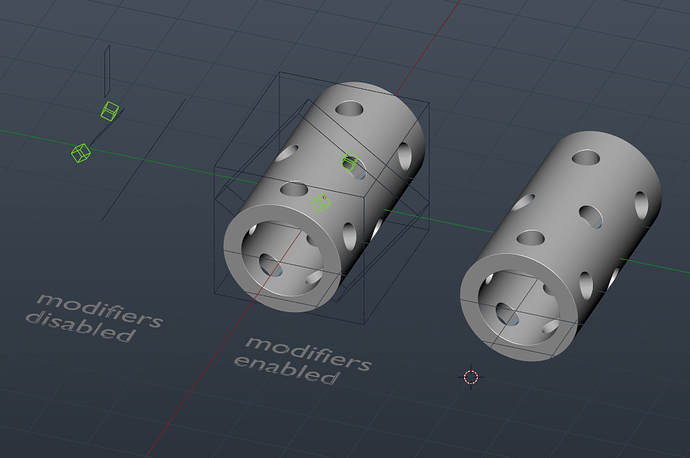 As such it is surprising to see it as anti-feature as we already have Array modifier(that is amazing), the only question is “circular” duplication pattern (which can be painstakingly achieved already with dummy object cluttering the scene). The argument is really about adding a few new knobs in Array modifier to make blender more user friendly and productive.

Yes, for me, it’s very perplexing that Blender has an array modifier (one of the most used modifiers) but it does not have circular/radial mode. It’s an essential feature any array distribution feature should have. I am having really hard time understanding how it could be omitted in the first place, and we actually ended up needing a 3rd party hacked build for that

EDIT: Looks like there is already entry on RightClickSelect for it here:

Pretty much what it sounds like, having a rotation offset can save adding a rotated empty and parenting, doing 45 degrees trickery with the mirror modifier to make 4 copies of something X/Y aligned, stuff like that. I feel it's used frequently enough...

If anyone hasn’t voted yet, please do.

can you make a build with fracture modifier and the new cloth sim? with the latest blender master?

You’re asking for too much)

Nice job. I really hope that the weigthed normals modifier will make it into the official releases :)! I have writen some scripts that copy the objects, apply all modifiers and than apply weighted normals before exporting or baking. This modifier makes them unecessary and simplifies my workflow!

My workflow with cgstrive’s build!

Hello Jüri,
Would you mind share your build’s sources somewhere? Maybe on Github ?
I’m interested in your “hackish modifiers” code.

I apologize for delay, a lot on my plate. This is not github quality material nor proper, exemplary way to develop something. These “hacks” are often one-liners (e.g eModifierTypeFlag_AcceptsCVs allows modifier to work on curves, but can cause instability), changes to math such as Scaling or offsetting UV (code can be inspired by MOD_Array, Mirror) etc. This is trivial to any developer.
Instead of changing 10 files to do it properly, i just compare modifier name with “strstr” in 1 single file (MOD_*.c) and trigger alt functionality. This saves a lot of time, including with maintenance, but it’s shameful approach. After all the intent of this post was to highlight these ideas in hope some of them could be picked up by professional devs of Blender to be enjoyed by all in future blender releases. If i’d have enough confidence or time for making a patch, I would. This is not the case. If someone experienced would like to collaborate with me on similar ideas, I’d love to hear from them.

I would also like to thank and share Campbells great advice of using “grep” (with cygwin in windows) to quickly search through source code for examples. It has been invaluable for me. If artist is already making a custom build, one should have confidence to try their ideas and use tools like “grep”. Most of my tweaks are just a few lines.

Thank you!
I’ll look at this.

FYI the GPL Blender is licensed under requires that if you make a binary public, you must provide the source if requested.

cgstrive does what he can, I asked him to post his build, for sources, it’s a hack, not something correctly placed on a github, he doens’t have a github and don’t know how to do it, so what can you do to help him since you request the sources?

I’d be happy to help in a couple days once I get back home from vacation. It shouldn’t been too rough since Blender is already under git.

One is legal until proven illegal in a court of law.
Only judge can judge.

Too many assholes are nowadays running around blaming & judging by their self righteous ‘holly’ ignorant opinion - take care of yourselves and loved ones!

& About licensing intentions, IIRC, it’s Ton’s way to liberate & accelerate Blender’s distribution. Know that even, if you’re fully legit whichever subscriber, there’s no warranty on any software and all commercial pieces are closed source!!! Don’t be mislead by the wicked and their intentions.