I am trying to cut three orthogonal, through holes in a sphere that will go along the three axes. In order to do it, I inserted three cylinders as in the image below (the cylinders were selected for better viewing): I used the non-destructive bool tool (in the “Add-ons”) to make the boolean difference between the objects. The holes on Y and Z axes came out right, as seen in the next two images: However, the hole on the X axis didn’t come through right: instead of a through hole, the hole ends with an artifact at the edge of the holes on Y and Z axes, blocking the hole as seen in the next image: The boolean was used by selecting all the objects at once (the sphere was selected last, of course). I thought it may be an artifact introduced by the Bool Tool. So, I tried a different approach: using the Boolean modifier. However, even when using Boolean modifiers one by one for each cylinder, the artifact is there.

I don’t understand what is going on - I’m a novice with Blender. I would appreciate it if someone would teach me the reason(s) behind the artifact, and - if it is possible obtain the three orthogonal through holes - how to make the holes. If it is possible, I’d like to keep the sphere drilling non-destructive, in case the hole diameters might have to be changed at a later time.

It is a bug when by a boolean operation faces are 100% align with the 2nd object for the operation.
You have to change the size of the tubes abit like .0001

It is a bug when by a boolean operation faces are 100% align with the 2nd object for the operation.
You have to change the size of the tubes abit like .0001

Thank you for your reply! Will do as recommended.

Follow-up for others who may encounter this issue:

Only the cylinder creating the problem needs to be changed. This is usually the last cylinder to be selected prior to selecting the main object. (In this add-on, the main object is selected last). I increased the offending tube size: 6.35 mm → 6.3502 mm. increasing the tube size to 6.3501 mm yielded yet another strange artifact, as seen below: 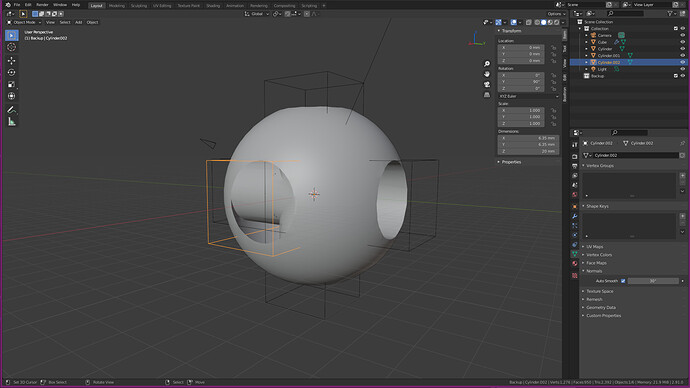 The moral of the story: one must experiment with small increments / decrements of the diameter in order to get rid of the issue shown in the main post.

A big ‘Thank you!’ to rigoletto for teaching me about the bug, and pointing to the solution.