Cutting out custom shape from one object to another

Howdy. I was looking around for help with my problem. I have to separate parts for my model(it’s a plane) so i have the main part, with cockpit and the 2nd one that i want to attach to this one, the wing. So what I want to achieve is very simple. I need vertices from my wing to be cut out at exact positions. Boolean adds more vertices than it should be so it’s not a good solution. Tiny CAD VTX is not usefull in this case because it requires the lines to cross each other, in order to create a vertex at the crossing point. I know that in old B2.49 there was an option for that - it was in a script called, Cross Section. So I’m asking u guys for help, there must be another way than comming back to the old blender 2.49

Why not just use the knife tool on the fuselage piece and afte you get it close to perfect, go in and snap it to the vert positions on the wing using an axis constraint? Seems to me it should work.

But knife tool will only snap to the vertices, not faces

Not-a-hack: topologies of wing and of fuselage are probably not compatibile. I see intersecting faces here.
Knife can snap to vertices, but sadly not to polygon surface.
Vertex can be snapped onto surface BUT not in vertex slide mode! Argh.
+1 for the question

Duplicate wing loopcut, made close to fuselage; separate that and shrinkwrap project on fuselage. Make needed loopcuts on fuselage while snapping to projection points.
If you scale that separated loopcut little bigger , you could even make nice surface between fuselage and wing, extruding outline and scaling it down before bridging to wing. Example: 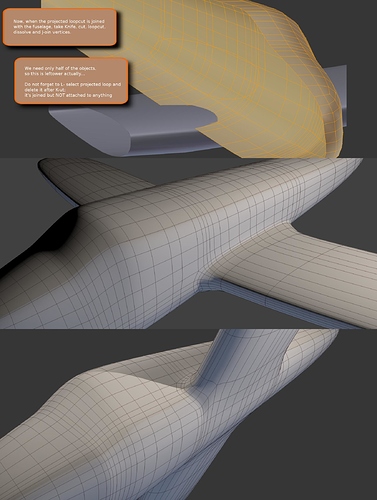