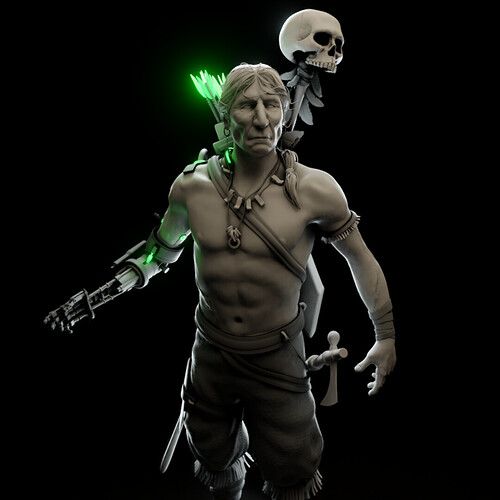 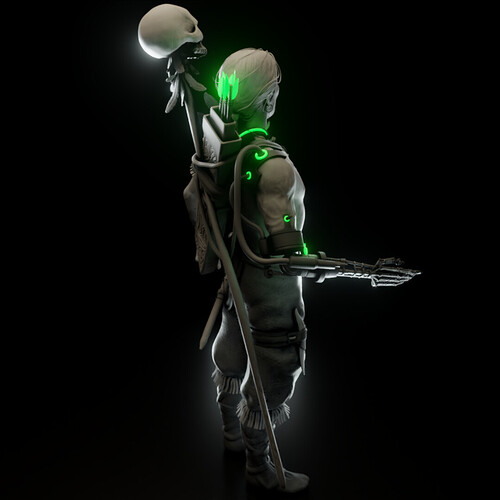 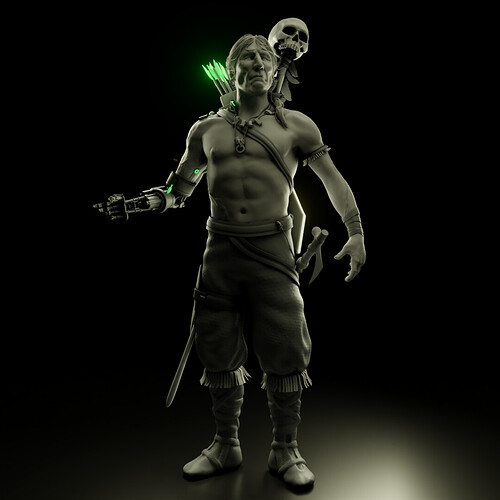 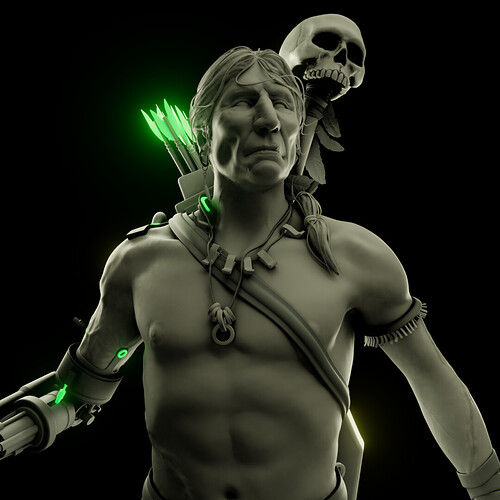 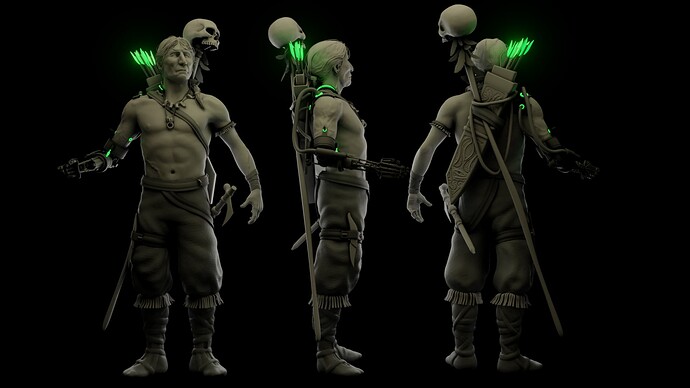 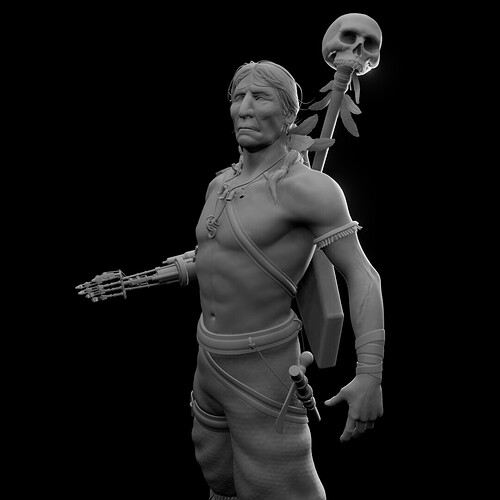 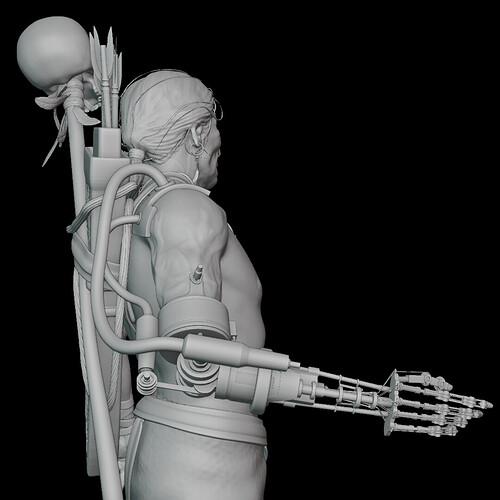 Looks good.
Nice and clean sculpt / solid modelling, good anatomy / proportions and you nailed the likeness of an elder native (North) American. There is nothing to criticise about your technical abilities.

I really like the idea of a Cyber Native, but I can’t help to feel slightly underwhelmed by the actual design of this concept. You kinda walked in the trap of known cliches of Cyberpunk which consists of artificial robotic limbs and glowy stuff that serves no real function. I am a huge Cyberpunk fan and while I think there is nothing wrong with using these trappings I feel like you took too much of an easy route and left potential to be more creative on the table.
Admittedly, glowing arrows are cool and they make it easy to see them hitting or missing their target (like tracer rounds), but they also paint a huge target on the shooter, rendering the stealth properties of this silent weapons useless. This is one example of why I am wary of these glowy lights.
‘Rule of cool’ is cool unless it undermines function.

I think what irritates me is the anachronism of his appearance, he clearly looks like belonging in the 19th century if you ignore the cyber.
Natives in the present (and near future I guess) rarely look like this outside of rituals and historical enactment. There are indigenous people living outside of the modern world who do stick to their ancient traditions and appearance, but I would argue that the moment they come into contact with modernity and technology they adapt and change, if only in appearance.
You may brush this criticism off by saying he IS a 19th century warrior transported into the future by some story device and this is totally fine. You are the creator and your word is truth.
My criticism of this is entirely motivated by my personal taste and viewpoint, if I where in your shoes, creating a Cyber Native I would have put him into modern / futuristic clothes that retain native sensibilities in addition to wearing native accessoires and weapons, creating a more striking hybrid of traditional and futuristic.

This is what I meant with taking the easy route and leaving creative potential on the table, but these are my expectations and standards and you are under no obligation to meet them.

This is very high level criticism but I hope you find this a little valuable.

Hi Romanji, first, thank you very much for your critique, extremely well built, that made me look at my own creation in a different way.

At first, I intended to create a traditional Native character, inspired by the movie ‘‘The Revenant’’, but in the middle of the process I chose to add some elements of the cyberpunk aesthetic as I found the overall composition a little poor, the intention was to create a quick concept that could inspire future works and models, so I didn’t pay much attention to functional and practical aspects, with my recent transition from mouse to a graphics tablet, my main focus was to adapt while letting my mind flow freely through the design without getting stuck to some predefined concept, this really ends up creating some discrepancies regarding the visual but as a concept art I think it fulfills its role of inspiring new creations.

Again, thank you very much for the review, I still have a lot to learn about harmonizing a work in general, your tips will be very valuable for my development as an artist!!!