I have recently worked on one project that included fire simulation and I used new Blender 2.71 cycles CPU rendering of volumetric fire + smoke. Everything went well using a https://www.youtube.com/watch?v=oSiV5gg_lCs as a tutorial.

Problem arises when I wanted to render the fire over the transparent background/film. Transparency was messed and fire+smoke where too opaque. I tried everything and didn’t solved the problem.

Today I replicated the case and still found not answer to my problem. I am sure it some bug since in the preview windows it looks good but when I render it actually out - its bad.

Here are some screenshots to give you idea what I am talking about. 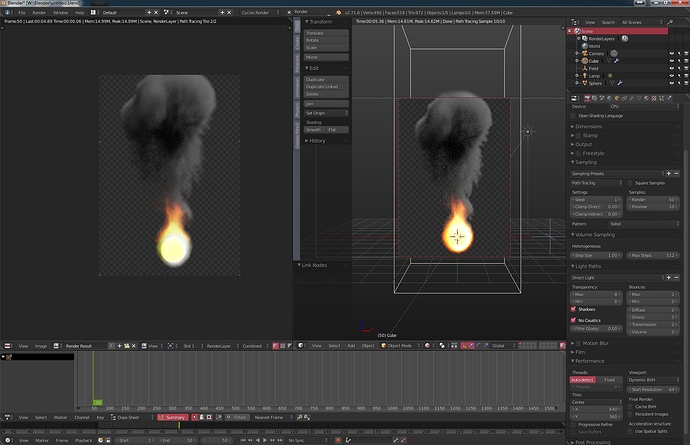 On the left side you can see the render and on the right side window render preview. Notice the fire, its more opaque which is bad. 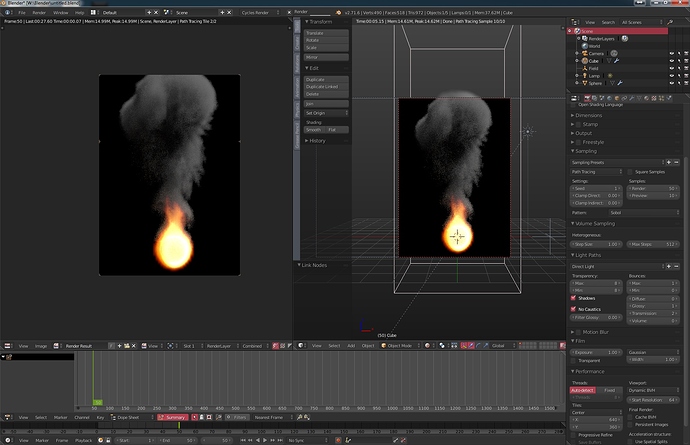 It looks good when I turn transparent film off. Try switching to static BVH instead of dynamic BVH in the performance panel of the render settings, and see if that makes the viewport match the render

Hello gregzaal, thanks for replying.

Tried it just now, same results. As I said I tried every option (including that) on the render/world tab and I always getting same result.

By the way, you can download the source file here https://dl.dropboxusercontent.com/u/11633549/untitled.zip - although you will need to simulate the smoke.

I would suggest approaching this as a compositing problem:

Note that you can do this no matter how you obtain each element of the final picture. You can use Cycles together with BI as you see fit … it’s all the sme to the compositor.

Yeah, on the one hand, “it’s a little bit more work on your part,” but on the other hand it gives you control, and the ability to exercise that control without further cost to you. The rendering is already “finished” at that point. All that remains is to produce the final picture … which is an altogether different thing.

@djoxy first check that it simply isn’t a matter of sample count - render the same number of samples in the viewport as in the render. If they still don’t match, I suggest you report a bug.

@sundialsvc4 as far as I know, the viewport render should always be exactly the same as the final render. This has nothing to do with compositing.

Hi, sorry for taking so long to reply. I don’t think you are doing anything wrong, so it would be great if you can report it as a bug like Greg suggested. Thanks for taking the time to test it out before submitting!

Thanks all for reply.

Yes I will report a bug.

@gregzaal I tried same count of samples the result was same.

Until that bug is resolved:
If you hide the sphere object in the render, you will at least get rid of that very prominent opaque circular center of the flame.

Ok, we found the troublemaker thanks to Sergey from Blender foundation.

The problem was in color spaces. For example, you have to setup the same color space (sRGB for example) in the Blender as well as post-production software like AE plus you have to check on the linearize working space in AE in order to get same results as in Blender.

As for Blender render window for itself to get a real preview you have to overlay rendering layer over black color for example. 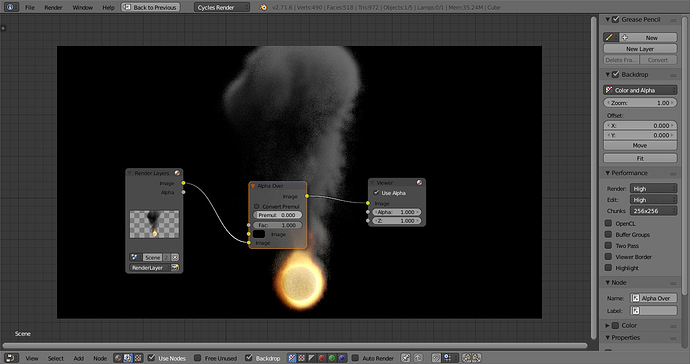