Hey All, here are two new renders I did this week. Crits and comments are welcome. 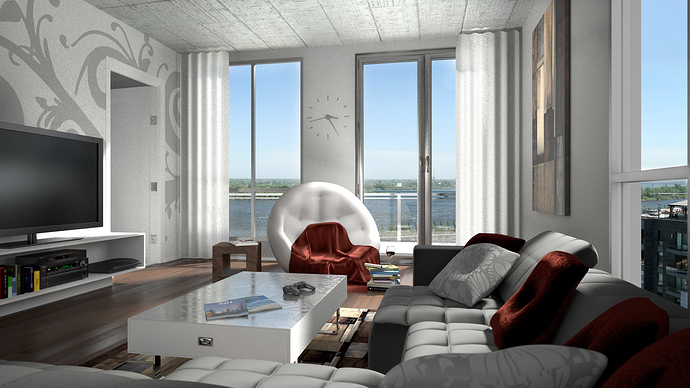 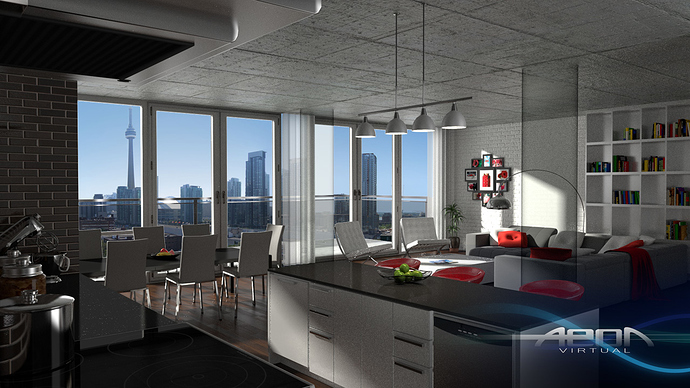 Wowowow! So pleasant environment full of details.
Could you please share any tip on the lighting setup?
I’m having hard time to get a well lit interior scene.
And what about render times?
Cheers for this awesome work, I’d be happy to produce something half this good.

Lighting setups are fairly easy. Just a small plane outdoors with a very high emission value for the sun (emission 4000) and the ambient environment light set to white and strength to 1.5

In the left render I placed a light box just above the poof because it was too dark. You can go in the object settings and make the light invisible to camera rays so that it wont be rendered.

Thanks mate! So many light sources, I see.
I like the use of colours: almost all black and white, with just some spots of strong red.
Maybe the floor is a bit dark, but is a matter of taste.

Really grainy renders, moreover I think that you used white light instead of HDRI of blueish one, it looks quite unnatural. Nevertheless models and shaders are in general OK.

To be honest I tend to ignore graininess because it’s just a matter of letting the thing cook longer; it means nothing in terms of good or bad scene.

Indeed, the grain does not matter to me either, of course it is always nice to see grain-free renders but it is no priority.

I don’t see anything unnatural about the colors either.

What I do know though is that these are the most impressive Cycles archviz renders I have ever seen, great job

The grain is unnaceptable in a production work.

The light of these renders doesn’t match with background, the white tone doesn’t look like sky lighting. The sun it isn’t very acurate too. It’s a pity, because materials and modelling are great, but the ligting quit some points

Indeed, the grain does not matter to me either, of course it is always nice to see grain-free renders but it is no priority.

My, my, I’ll sure a skilled artist like bigwings is aware of that but posted here either test scenes or half-baked renders for the sake of having an early feedback.

Of course it matters in commercial work but this is a forum where we post our artwork to be judged by other members, we don’t get paid for it so it doesn’t matter as much.

My, my, I’ll sure a skilled artist like bigwings is aware of that but posted here either test scenes or half-baked renders for the sake of having an early feedback.

Ok, ok, I just wanted to express something similar to NinthJake: this community is not our client, simply.
But this discussion is turning too serious for me; I’m just a CG enthusiast and like very much this and other works from BigWings.
Cheers!

I agree that though graininess (or lack of it) is sure very important in production, in this forum images are of great interest to other artists that already understand where the noise comes from and it is dealt with with more processing of the scene. Though it is interesting also to see a less grainy scene as an indicator that it can be actually done and to be able to see the overall picture better.
This said, I like the complexity of the scenes, so Cycles can handle such models, thats good to know.
I think the light is not yet there, there is a grayish tinge to the scene, and some ares lack contrast or definition. I agree the light colour is not right, and this gives a grayish tinge to the scene. in the first image the window frames are strangely lit, is it a light coming from the right side? Some materials don’t look very natural, like the couch and other textile materials and the ceiling (except if the ceiling was meant to be painted shiny silver wich I doubt). I like the glossy materials though. I like the second image better but the foreground, being far from the windows, is too dark, maybe you have to fake it a bit and place a fill light somewere in the back or put a white bright material on a far wall just to bounce enough light in that part of the scene. Maybe you could also rise the camera just a bit so the room layout is more evident, now the more interesting part is partly hidden behind the kithchen furniture. I am also wondering what that grey transparent thing hanging from the ceiling is? (that’s a different question, I’m looking for something to use for a partition in my own living room and maybe I steal an idea from your project

Hope didn’t sound too harsh, these are really good images and I am eager to test cycles when I get to it… (and get a new video card)

Thanks for all the replies guys. I’m just getting into this myself so any feedback is appreciated.
In the right image there are two columns in the scene that the client asked me to make transparent.

As for the light color, I’ll play with it to get it better