Im making a bedroom scene, the mesh is provide by the 3drender.com and try to render with cycles, but even with 8000 samples still noise… Its is a complex scene, theres a lot of detais, but if i render this 8000 samples in 1280px width by 720px heigth it will took ± 2 entire days! And it will be noise… Theres a way to reduce noise in cycles? More lamps? Less Lamps? I dont know… In this scene there just 3 sun lamps (windows and door) and a blue color in the background.

The scene is attached (I rendered small to see if 8000 samples it will be good to final render, but still not…)

Well, i hope someone can help me or i will need to leave my pc rendering for 3 or 4 days to make this scene good. 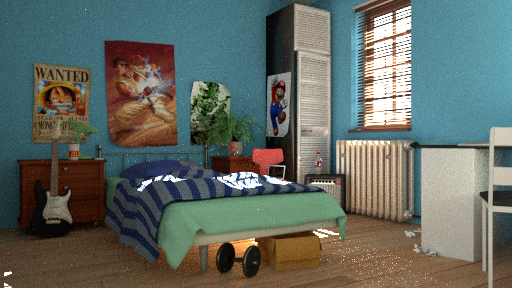 That is ok, your materials are bright, lot of energy reflected, with full GI it mean many noticeable secondary- and higher order reflections, they are tend to be noisy by definition. Try use darker material. That floor fireflies are reflects from tiny radiator parts that overbrighten ? If so, try to deсrease radiator color or adjust light direction to get it our of main light beam.

You don’t describe your lighting setup, but I think the bottom line is that you’ll need to greatly simplify your problem. You might need to composite the scene, and maybe use a combination of Cycles and BI techniques.

It seems to me that Cycles works by converging on a solution. Especially when you have a combination of high-key lighting and low-key objects, it doesn’t always converge … and adding more samples doesn’t help. (It simply “churns” around the same unacceptable-to-you solution.) Scenes that would be difficult to photograph on film, such as this one, seem to also cause problems for Cycles.

The solution I’ve found is similar: simplify the problem, and break it down into pieces that can be dealt with separately. For example, start with total darkness, turn off the sunlight, and light the interior-only scene using interior-only lights of appropriate colors. The solution ought to converge in 200 samples or less; less is better. Devise interior lights which emulate the color temperature and general fall of the sunlight. If the solution turns “noisy,” try a different tack.

Separately deal with the sun. Now the only thing that the sun actually needs to do is to throw slatted shadows on the edge of the window frame and perhaps on the bed. It does not actually have to light the interior scene.

Also consider that an identical effect upon the bed could also be achieved by a “gobo” on a conventional spotlight coming straight down onto the bed … composited into the finished image. (Ideally in such a way that you can fine-tune its color temperature without re-rendering anything.)

A deliberately higher-contrast setup might converge more quickly and more accurately. You can always de-saturate the image “in post.”

At the end of the day, what you need is an image that you could generate quickly, that you can now adjust and fine-tune quickly, and that looks visually plausible. There’s nothing in the play-book that says that to do that you must actually construct reality.

There are lots of real-world photo situations that are very difficult to solve “all at once,” but that can be broken down into a set of simpler, more easily-solved problems whose solutions can then be artistically combined. In some ways, Cycles is beguiling, because it suggests that “now at last we can solve the problem all-at-once!” when you really can’t.

It really helps to tag along with a studio photographer for a while, just to see the crazy tricks they do. For instance, I watched a group of photographers set up a “lovely springtime day scene” in a hotel lobby, with “sunlight” streaming in through the windows and so on. They did it at two o’clock in the morning on a moonless night.

Thanks for tips sundialsvc4, i will change the lighting setup to emulate the lights of the room and left the sun only to make the hard shadows of the bed. Lets see if this work.

That obviously, all light come from window, but what is last object before that firefly cloud appear? We have no access to scene, i looked at it more and now i suspect small glossy object under bed, maybe metal chair lag or other toy, just after that box that hide main highlight square area from camera point of view. If it small that path tracer vary rare can hit and connect light to source behind window, low probability = pixel brightness raised proportionally. Try to avoid that in PT, move that object out of main floor highlight square area.

Hello guys,
I Achieve a better result with less samples, but still in 6000 and are fireflies on the floor as weel, even low, but there.
Cycles not render well sun lamps? This is because of the sun lamps come throught the window, so, what i can do to avoid this? 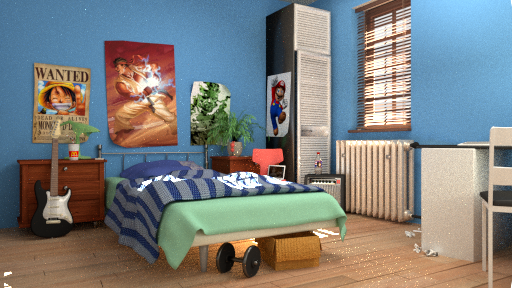 Since this is a still image you might be able to get away with filtering out the fireflies manually.

It shouldn’t be too difficult in this case because the density is fairly low. However, since it seems like there would be a low amount of light contribution in that area that the fireflies would eventually converge to, you can remove the fireflies and paint a little light into that areas on another layer set to an additive blend mode.

Hi romulojordao, you can post the file with packed textures to pastall.org (<30 MB) or other filehoster.
It would be a nice challenge to get the render time down to the max., there are many “experts” on board here.

hy mib2berlim, Cant send with textures because only the 3d file has 28mb.

But I can send you back pictures.

One area light at same position as Sun, two low mesh emiter in back of camera and in the top area of the room. Compositing > Gamma + Hue Saturation.
Render with GTX 260 4.36 Minutes 500 Samples > Hotpixel removed with HotPixel Eliminator.
http://www.mediachance.com/digicam/hotpixels.zip
(Work on linux with wine)
AS long cycles not have a portal material/mesh it is not possible to render interiors fast and without noise. But for 5 Minutes it is ok. 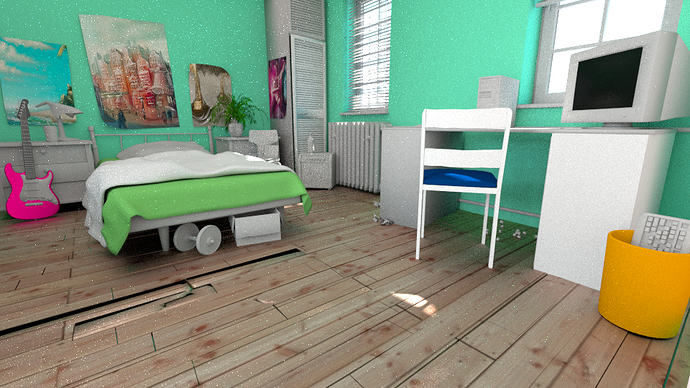 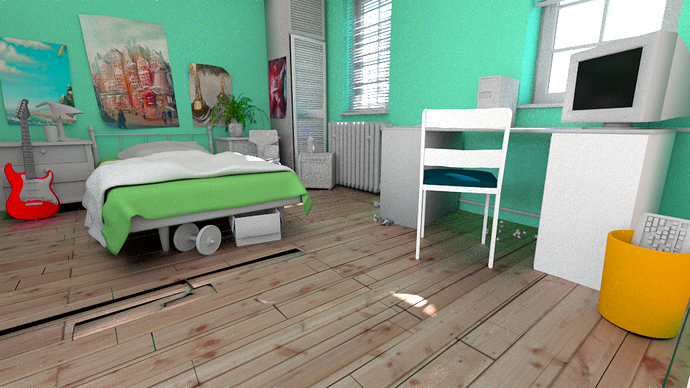 Render with octane for comparison, 500 samples 5.34 Minutes but more glossy materials and no post-production. Render as is. 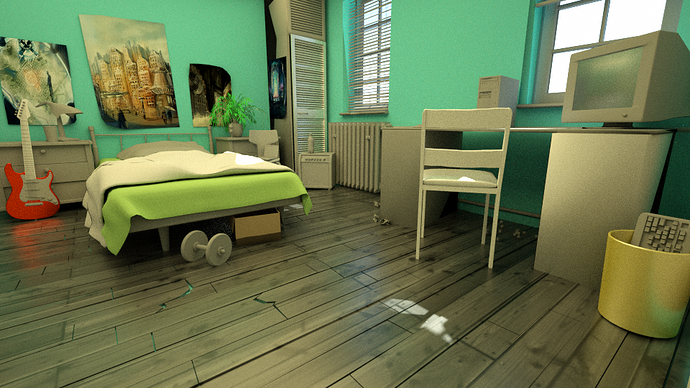 I know which one I’d prefer, and sadly it’s not Cycles

Its True, Cycles still need a lot of work to get compared to octane, yafray, etc. But is nice have this kind of renderer in blender and hope is gonna better soon. For now i hope if i take more samples get this image clean and really thanks for the help and for this reduce nois software mib2berlin, its awesome! Its really help to reduce some noise

When i finish i will put the finished result here.

The viewer will, at the first instant of regarding your image, bring with him or her an entire lifetime’s worth of “real world” experience with regard to how he or she expects the lighting of such a scene to “actually” be; of how things “really” are. Strive to take full advantage of those experiences.

The very best advice I ever heard about photography was this: “Look at the light.” Not at the scene. Not at what you know the scene to be. Close one eye (to stop your depth-perception), and look at the light.

You don’t have to match reality. All you have to do is to prevent the viewer’s eye from screaming, “that’s fake!” Big difference. A marvelously, practically, fully exploitable difference. As Michael Douglas’s character said in the movie version of A Chorus Line: “Don’t draw my eye.”

Just for comparison,
Opened the obj file, assigned some materials to objects did two renders with Yafaray.
I love cycles and think it will become awsome, but Yafaray is amazing noise free and pretty fast (almost 6 year old comp) and a good complement for indoors and scenes hard to light with cycles.
For these pics i only used a single sun lamp outside shining in through the windows.

It is very useful to use new AO for interiors for me.
This test render is 500 passes (about 5 min.) and it is almost noise free. 2 lights sources: TV and sun. No postproduction, GTX 460. 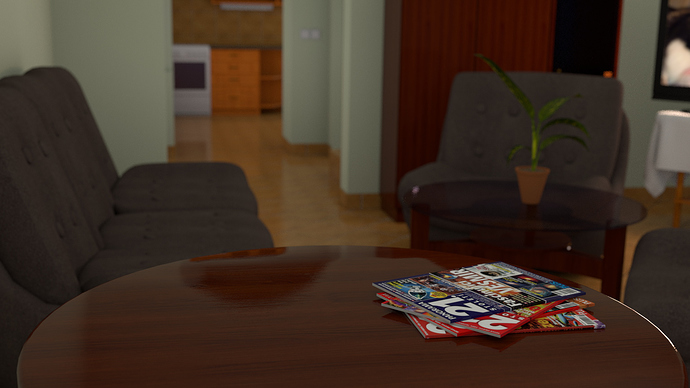