I was wondering what this is and why it is happening??
After the tutorial told us to boost the sample settings to around
500 the dotes started to fade away… But they are still there…
Especially noticeable in the darker places…

If you first time trying monte carlo based renderer, dots are normal, it feature of render, they all will gone only after infinity time (no kidding). Some scenes can converge very fast, like simple diffusion material and constant color background shader, maybe 100 samples is enough. I have scenes that very noisy after 20000 samples (more then 24 hr of rendering).

But there are maybe some bug in shader as well, can you link screeenshot of image?

yes… here is a screenshot
This was at 500 samples… 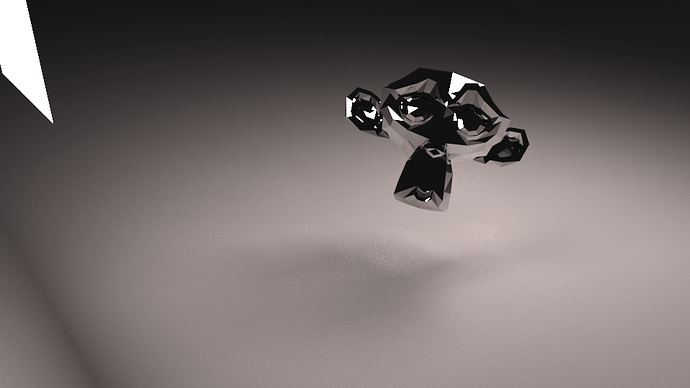 So is raising the sampling level always the best way to prevent them??

Is there a way to estimate how many samples you will need?? because I can imagine if I were to render for 24hr straight
and then at the end of it find it still needs more samples… I would be pretty pissed off… ha

You can better read somewhere about Monte carlo based integrators, i am not a guy who can describe it features. Your image looks very good and bug free, you need only more samples to clean noise. Of course they annoying, but it is nature of all unbiased renderers.

For real random numbes generators quality increase speed (noise cleaning speed) very fast at beginning but become slower with time, formula is 1/SQRT(N), N = sample count. Cycles use more complex Quasi-random sequences, and perform a bit faster than real random generator, but trend is same. As a common sense, if scene look very noisy after 4000 samples it can take weeks to converge to something that looks noise-free.

Of course you can tweak scene to reduce noise, any material that have “sparks” in BSDF compared to diffusion add lot of noise (actually, probability to build photon package path will vary a lot and some image places have extreme low probability, renderer raise brightness when photon hit that place to compensate probability, you got white “firefly”). But real solution only to have island - size renderfarm powered by nuclear reactor, unbiasness require a lot of computations.