ok well i rendered a picture of water and it is extremely grainy heres a picture: 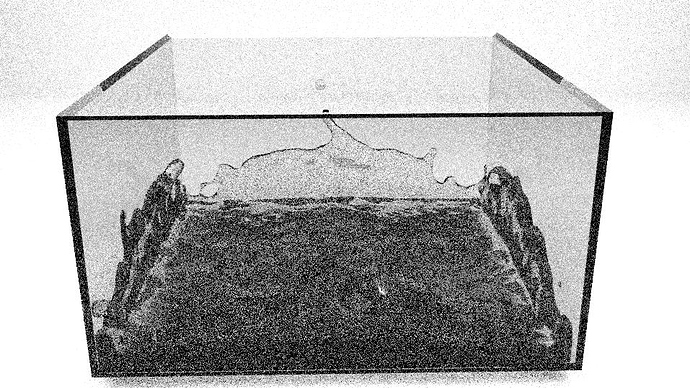 for more info just ask, i can post a link to the blend. file download if needed

It’s supposed to look like that, the reason is that Cycles uses pathtracing.

How it works is that the engine is basically rendering a series of samples onto the screen one by one until it reaches the number of passes, or samples specified in the integrator settings. Setting the sample count to a very high number and letting the engine render for a while will allow a convergence to a noiseless image.

In other words, let it render a while, the reason it’s grainy is because you did not allow Cycles to render enough samples to the screen, let it render awhile and it will eventually become clear.

thanks i get it now

As a side note, you need to increase integrator Max Bounce (and Transparent bounce), like 12+ or even more, to get rid of black details in scenes with lot of internal reflection. That make render even longer, but realistic.

This tutorial talks about integrator basics. The other settings are in the same spot. I was having a similar issue until I found I can change the number of passes as storm_st said. http://www.youtube.com/watch?v=gRvOfj4MQbE&feature=BFa&list=UUOzjHcCi4z0nZRlxXU--cXg&lf=plcp

I have also found … for whatever it may be worth … that things go better (sometimes much better) if you artificially increase the contrast and saturation in the original scene, planning to post-process the resulting image after the fact to reduce these characteristics.

However: it just might well be the case that what I am actually doing is trying to compensate for the noisy outputs that are naturally obtained sooner, by reducing their visible noise level “far enough, soon enough,” that post-processing steps aimed at reducing contrast and saturation also eliminate the (most objectionable to the eye effects of…) noise.

I have also found … for whatever it may be worth … that things go better (sometimes much better) if you artificially increase the contrast and saturation in the original scene, planning to post-process the resulting image after the fact to reduce these characteristics.

To do that with the realistic lighting system found in Cycles might make it more difficult than it’s worth.

Setting it up alone could take a while to get right, because you would be sitting there watching a render that doesn’t closely match what the final result will be, and then you would have the issue of making sure it would come out to a good result when the contrast is lowered, and your success at reducing visible noise is found nullified because you now have a make a bunch of new test renderings to get everything right.

To me, Cycles right now is a great way to get approximate ambient-lighting solutions (expensively and at high temperature) from the GPU. Quite frankly I would be far more interested in a good set of GPU-accelerated conventional rendering nodes that could “do the math” faster.

What I don’t see (yet) from the Cycles algorithm is any sort of feedback mechanism that would focus the algorithm’s attention upon those areas which, somehow, “seem to be improving the most” as more cycles are performed. As things stand right now, it appears that “a tantalizing picture appears almost instantaneously from the gloom,” but it doesn’t get better as you continue to pour “cycles” at it. Yes, the algorithm leverages the raw computing horsepower of the GPU, but it isn’t a “clever” algorithm by any means yet.

You need other render then, not Cycles. Cycles use Monte Carlo integrator, you ask for old Phong scan line renderer, modernized for OpenCL.