I recently started playing with Cycles after seeing that a model I downloaded off deviantArt was using it. However, no matter how I tweak the render settings, even when watching a few speed-up tutorials and testing speed over quality, the rendering of this one particular model I downloaded takes forever (as in the progress bar suddenly halts indefinitely). The odd thing is that with shading set to “render” in the 3D port, it behaves as it should, and furthermore, the preview samples are set to 24, with the final samples set to 26, which should be practically a tiny difference.

I’ve been able to narrow the problem to the models of this artist in particular. I attempted to render a test cube I had tesilated in sculpt mode with dyntopo to the point about ~35,000 verts/faces were generated, which is about half of what the concerning model is. It rendered just fine. I don’t know if it’s render settings the guy prefers or if maybe the 2.74->2.75 upgrade deteriorated the file.

A few people I’ve linked to the download for the model say it renders just fine for them. I’m curious to see if anyone out there has such luck, and if so, would mind posting benchmark results and if they tweaked anything. My GPU and RAM are fairly decent (GTX 750 Ti, 8 GB) so I have a hunch that perhaps they are taking long to render and I’m just not used to Cycles.

The model can be found at this link

Are we talking about the same file?
For me the samples show up as 10 and 16 with “Square Samples” enabled, so that’s in fact 100 samples for the preview and 256 samples for the final render…

I’m not sure how to toggle GPU/CPU? Is it by toggling “open shading language”?

The switch is under “Device”: 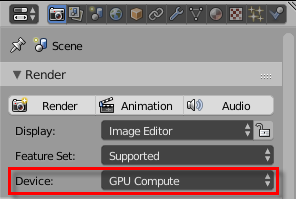 For this to be available, you must have the GPU configured in the preferences (Ctrl-Alt-U): 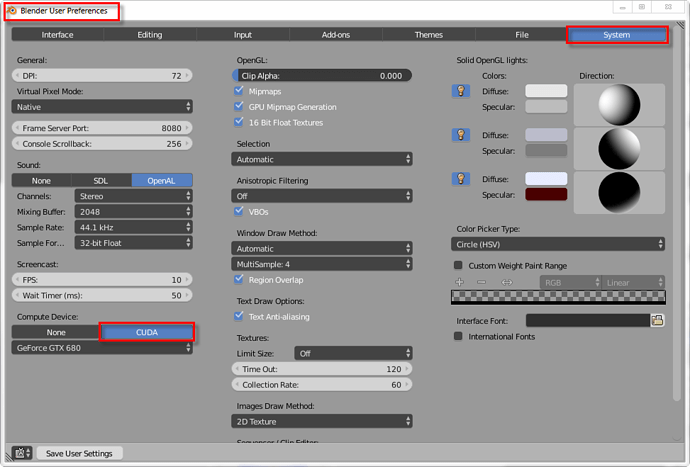 Ah okay. Also, I noticed something peculiar. I glanced up at the time passed since rendering started and it pauses shortly after starting! Shouldn’t it be running?

Not sure what you mean…

Another thing: Make sure you select the tile size according to the render device. 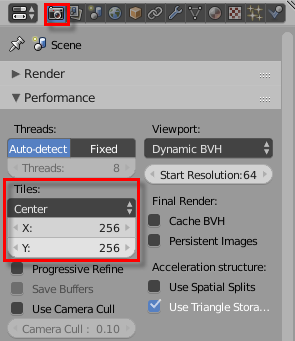 I read that X/Y with powers of 2 were irrelevant? Or was this for demonstration?

This was just an example for demonstration.
In “reality” it makes sense to adapt the tile size to the render resolution to get an even split of tiles, so for 1920 x 1080 to render on the GPU you could go for a tile size of 240 x 216 (8 x 5 tiles). Or just use the Auto Tile Size addon which will do this automatically.

25 mins sounds right. Yeah, like I said, I just started using Cycles, so this jump in render time was new to me.

But that’s nothing typical for Cycles.
Rendering animations is always costly when it comes to render times. And in each and every render engine will have to multiply the average render time per frame with the number of frames…?

I somehow doubt we talk same file? If i open download and press Render Image i get this:
http://www.pasteall.org/pic/90268
There is no 35% render size set, it is 24 and 26 samples squared (Total Samples 676 AA) and time on screenshot says 8 min, not 8 sec when render and composit is finished. 120 full HD frames would take some 17 hours to render which is far from 25 min mentioned?
GTX 750, no Ti here.

Ah, i was worried my PC/GPU combo plays junkyard route :D. Good, if not, thanks!