I’m playing with Cycles, and I’m quite disappointed, besides being dead slow, unless you apply some exaggerated effects, it doesn’t produce realistic images. Let’s say no DOF, CA, Vignetting, etc. Even though it’s possible to achieve a quite realistic results using other renderers.
I had a theory that all unbiased (>80%) renderers were very photorealistic, but now this theory just went downhill. After rendering an image for 24 hours it ended noise-free, but with too much gradients and exposure problems, it reminds me mental ray renderings from a decade ago.

Blender is an absolutely nice 3d app, its productivity for modelling is unbeatable imho (once you get used to the hotkeys), but a problem that it always had, since the old times, is the lack of a decent and decently integrated “high-tech” photorealistic renderer. Cycles is high-tech imo, it takes advantage of all the cutting edge technology, but for my needs it just doesn’t have quite the right approach, of course it’s the best renderer Blender ever had, and it’s very useful and a very valuable addition, but for architecture, it isn’t quite the thing.
Yafaray for example is more suitable for architecture, but it is very slow, in fact slower than Cycles depending on the scene. At the moment I’m sticking with Vray and Octane, but I’d really love to use an opensource renderer, but unfortunately at the moment none of them allows me to achieve a ‘marketable’ result. Compared to the industry standards Vray, Maxwell and Mental Ray, and recently iRay/VRayRT, plus the commercial ones like Indigo and Octane (and even the alpha Corona), no opensource renderer stands ground, Cycles is more comparable to Arnold if you want my opinion, not good with much indirect lighting and doesn’t produce stunning images, but somewhat decent, of course Cycles is way slower than Arnold though.

Blender has an extra problem also, on other 3d apps, most renderers are implemented as a plugin that has direct access to the scene, but for Blender you have to export the scene, what could take some minutes depending on how complex is the geometry.
I’m not telling that it’s not possible to achieve a good result using Cycles, of course it is, but you need to apply some heavy post-processing, a lot of coffee :), and you need to use the “physical” effects like CA and DOF, which are very valuable for “artistical” renderings, but for architectural visualization, we don’t rely on these effects to achieve a realistic result, in most cases these effects are very subtle and what makes the images look real are accurate models and materials and also a very good global illumination and some post-processing.

Cycles works well. It is, however, a WIP

Not sure what your problems are, but for me it’s a tool and it enables me to produce good results.

Compositing a render can enable one to obtain the results one is looking for, but I’ve been unhappy with cycles, merely my ability to use it effectively.

It’s a personal problem, honestly. There’s nothing at all preventing realistic renders with Cycles and there are dozens of pieces in the gallery that show this off.

What about some example renderings, or more explicit issues you have?

As Matt said, there are a lot great Cycles renders to see: http://blenderartists.org/forum/forumdisplay.php?27-Forum-Gallery

Thanks guys. Maybe I’m just plain stupid, but Cycles is the first “unbiased” renderer that doesn’t generate a very realistic image after just hitting “render” and waiting some hours. The only thing that looks “unbiased” to me are the physical camera effects I mentioned. The GI isn’t realistic at all, maybe it would get better if I increase the bounces, but in this case it would take years to render an image. I couldn’t find an example of a decent global illumination on the galleries. The only realistic images using Cycles are realistic exactly because of camera effects, not the GI, and what I’m after is a realistic GI.
Cycles is very different from any unbiased renderer I’ve ever used, as I said, the only comparable one is Arnold imho, but neither is suitable for architectural visualization.
I can’t post the images I’ve used to test, because they are copyrighted, I can’t risk distributing them in an altered form.
Don’t know, maybe the problem is the bounces. I’m gonna make a simple scene to test it further.

Cycles and Arnold use RGB colors, instead of Wavelengths like for example Indigo. Maybe that’s the difference.
Apart from that, saying that the “GI isn’t realistic at all” is not true. Maybe your materials are not realistic or complex enough.
A default Diffuse shader won’t deliver miracles. You have to mix them with other Shaders.

Anyway, if you can’t show something we’re not able to help you really.

Cycles is very different from any unbiased renderer I’ve ever used, as I said, the only comparable one is Arnold imho, but neither is suitable for architectural visualization.

This is kind of on purpose. Cycles isn’t meant to be a perfectly physical renderer, don’t confuse “physical” and “unbiased”. Unbiased is a mathematical term referring to the fact that, given enough samples, you eventually converge towards a consistent result. That’s all, it doesn’t necessarily mean the result it was going for was mimicking real life. (that’s what “physical” refers to) If you are used to a renderer like Maxwell, LuxRender, Indigo, etc, no, you aren’t going to get the same result with Cycles, nor are you necessarily supposed to. Cycles is meant to be more flexible. In exchange, it can require a bit more of “knowing what you’re doing” to get realistic results out of it. Yes, you can have perfectly physical shaders if you want, but you don’t HAVE to.

Cycles in indeed capable of producing realistic GI, but a big part of it is how you construct your materials.

If you’re using some of the shader components by itself (like the glossy node), then yes, it will look wrong as you will almost always need to combine two or more to get realistic shading.

Another thing is that Cycles, being just a pathtracer, will not catch all of the lighting effects you get in Luxrender. Now Brecht has mentioned that you can indeed get a number of the missing effects using a very low value for the ‘glossy blur’ setting, but it will still take quite a while to render. (as in having to wait quite a few days in CPU mode providing you’re not using an i7 CPU and a MingW build).

Thank you guys.
It seems I’ll need to stick with V-ray for some more time. Yeah, maybe it’s just my materials and settings that sucks, but Cycles is somewhat slow compared to what I’m used to, in the future, maybe when I have a rig capable of rendering without delaying too much my production (maybe 3 PCs w/ 2xGTX690 each :D) I’ll give it another, more serious try. At the moment I don’t even have the time to try all the settings.
The fact is, with V-ray I can work in the daytime and let it rendering a camera loop at night, (yeah, my PC converts energy into money 24hs/5 :D) and achieve competitive results (after some hours of post processing), there’s no other renderer that allows me to do that.
Not to tell that I would only consider Cycles if using the GPU to render, and at the moment, rendering on GPU has a lot of limitations and stability issues.

Cycles isn’t that slow…but if you have an awful CPU or GPU then yeah, what do you expect? With a GTX 670 I can render pretty fast in cycles…I think i rendered a scene in 720p in cycles, about 800 samples on my old 460 in about 30mins or so…would probably be more like 10-15 with my new card. Cycles is what you make of it! If you can quickly get to grips with a different way of lighting and texturing, it can produce some incredible renders…you just have to know how to use it I guess! If you don’t believe what cycles can do or what all the hype is about, just look at some of the stuff in the finished projects section or even the gallery…im sure you will find something you like

I’m not telling that Cycles is bad, although these rendertimes you’ve mentioned (30mins) are hardly the case, unless it’s a very simple and well-lit scene. However, It can’t be compared to Vray. Even if I had a quad-SLI of GTX590s I wouldn’t be able to achieve a good productivity for fly-troughs for example. If I instead buy 8 or 9 FX-6100 powered cheapo machines I think I’d be able to render a fly-through almost in real-time (ok, i’m exaggerating a bit) using Vray.

I’m not telling that Cycles is bad, although these rendertimes you’ve mentioned (30mins) are hardly the case, unless it’s a very simple and well-lit scene. However, It can’t be compared to Vray. Even if I had a quad-SLI of GTX590s I wouldn’t be able to achieve a good productivity for fly-troughs for example. If I instead buy 8 or 9 FX-6100 powered cheapo machines I think I’d be able to render a fly-through almost in real-time (ok, i’m exaggerating a bit) using Vray.

You’re trying to shoehorn Cycles into a niche it’s not designed to fit, of course you’re getting lackluster results.

@m9105826: Why would I use Brute Force if LC+IM gives pretty decent results? Better set Cycles to a faster biased solution to compare… oh, wait, there’s none :).
Yes, I know Cycles isn’t designed to fit this “niche”, maybe it’s just too much ahead of its time, because I believe the industry will take some time to switch from Vray/Mental Ray to VrayRT and iRay and others. In fact, not even Maxwell is widely used, and in terms of millionaire industries, Arnold is kinda similar to Cycles (just a much faster) and it’s getting adopted.
The problem is the small studio or freelancer artist. And I think Blender is not intended for huge studios but for the small ones and freelancers, so Cycles is kinda outta the water in this case, because unless you have a very powerful computer AND a lot of time Cycles isn’t suitable for much thing imho.

Actually Cycles is perfectly suited for small-medium business. Instead of buying Vray/Maxwell/Arnold you can build a very good computer provided you know how. For instance compare Cycles running on a GTX Titan to Arnold or Vray and you will see you still have some money left for a Donation. Of course full Hair, SSS, Bi Directional Pathtracing are not in Cycles yet not to mention GPU but when they are then come back and tell us how it goes

Hm, there are many examples using Cycles with very good results.
It is only the knowledge of the artist to get suitable results in short render times.
Play a bit with the yafaray scene and get this after 20 minutes rendertime on mid-end system. 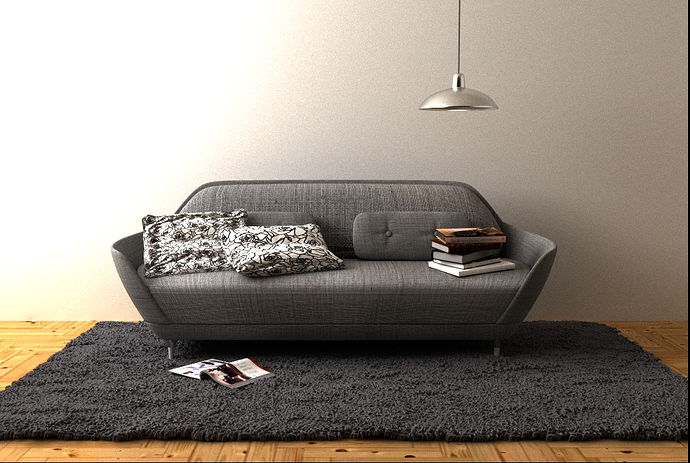 “Physical” is a dirty word. If a render pipeline can produce something at 50% “physical realism” at no cost, or very fast speed, it will always win over a system that produces “physicality” for more resources, especially with diminishing returns.

From my experience, it’s always better to shoot for plausible realism, something Cycles is great at, and then correct for integration/look later with artistry and technique. Better then investing resources in getting “physical” results that will then be shut down by a supervisor or client.