I’m in a really frustrating place at the moment trying to render fire in Blender in the 2.72 and .73 builds using my Mac Mini running OSX 10.6.8.

I’ve been watching a few tutorials over the last couple days and though I’m (ostensibly) following them step by step I can’t get it to render properly (the simulation itself is running fine).

This is the latest tut I’ve been trying:

Obviously it’s not for 2.73 but videos for this build are still few and far between (there’s an Andrew Price one that’s very good but also - doesn’t seem to work).

It said in a few tutorials rendering fire doesn’t work with GPU rendering yet.

Maybe blender is trying to use the GPU and I just don’t know where to change that. Unfortunately I only have a vague idea of what a dedicated GPU is and if my computer has one. But the user preference panel seems to indicate that no such device is currently an option so I’m guessing blender defaults to cpu rendering which shouldn’t be the problem then.

You need to mind upper and lower case with the attribute names: It’s “density” and “flame”, not “Density” and “Flame”…

Hm – nah that doesn’t seem to do the trick. I’m really at a loss here. It’s true though, it’s one of those little things that can turn out to be important.

Hang on – it seems to work now – took some renders for it to get it out of its system, maybe… 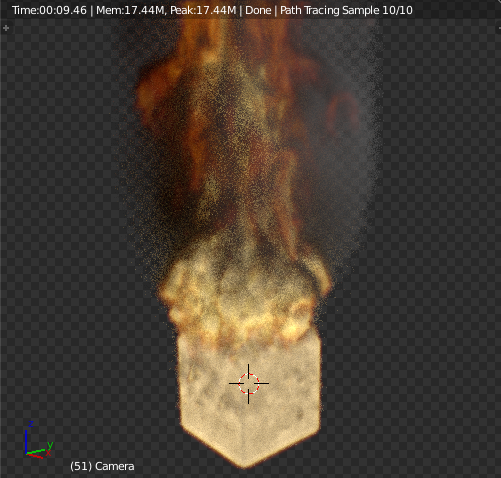 I made a new -blend and now somehow all the nodes were generated automatically the second I created the emitter and domain. I’m starting to think it could have been the order in which I was doing things – specifically at which point I’m switching from Blender internal to Cycles.

I’m not even halfway where I want to go with this but to all intents and purposes this is solved.

edit: I see what you did there…

The forum software does not allow posts with less than 10 characters, so an emoticon and two images just wasn’t enough…