Here I’ll have a thread of some tests I do with the new Cycles render branch for blender. Feel free to give your thoughts, and input. 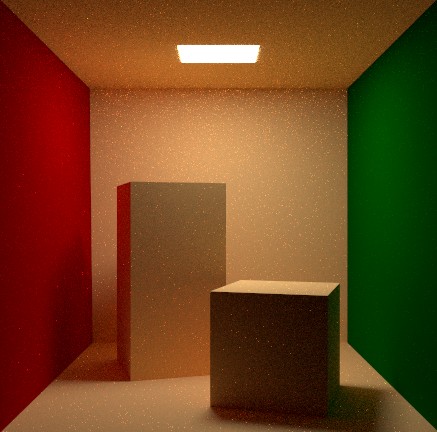 Well its horribly grainy. What’s it like after long enough to give a clean image.

Render with gpu 2.45 minutes, 1000 passes.
A few fireflies but mlt is not included at moment. 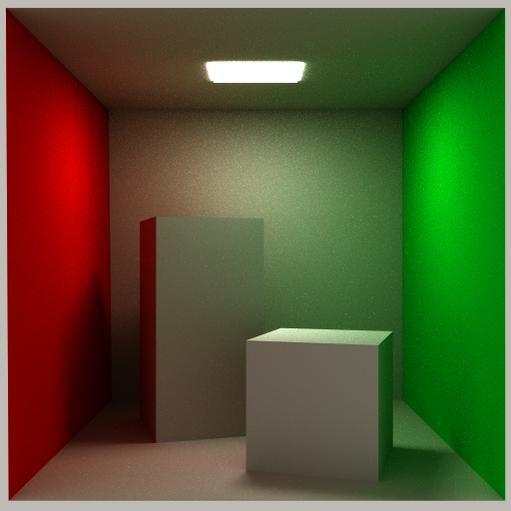 It seems to me that the first one is a lot warmer in colour, while the second looks better when it comes to graininess ect.

Personally I would be using CPU with this (I only have a 250GTS, not worth the time) while I have an i7 CPU.

Has anybody noticed any major differences between rendering with either in particular? From what I can see here the CPU is a different trick completely…

The problem is, i don´t have the exact material settings from dgriffin91.
Gpu and cpu looks like the same, cpu is far slower on my system.

Wefyb: I think the main difference, (aside from mib2berlin using 10x the amount of passes I did) is the scene mib2berlin rendered has the global illumination sky thing on… Here’s the file I rendered from: cornell-box-cycles.blend

Here’s another render, the scene is from http://www.3drender.com/challenges/ Rendered with Cycles branch 36374 in 6h18min at 1000 passes on a 2.6ghz duel-core Athlon 64, CPU only, 418034 faces.
There’s a bunch of things that if I re-rendered it I would fix/change, but I threw it together really fast so I can live with all the issues in the scene… hahaha Anyway this shows that Cycles can render a fairly large scene, on a slow computer, and look awesome in the process.

basse: yeah 6 hours is pretty long, but considering the similarity cycles has to a renderer like luxrender, 6 hours isn’t all that unexpected. Also, I was rendering other things on the same computer while it was rendering. And, the computer is pretty old…

Here’s the materials from cycles: (not including the mix materials)

I jsut wanna get back to my computer back home, I can’t test any cycles stuff with this shitty laptop…

Hopefully we will have a more stable (And a version with less load time for scenes, because that shit is ANNOYING) and faster version soon, anyway, I have to wait a month or 2 for the time being so I am not too worried about stuff right now.

The tests so faar are looking great, I will post ehre when I get the chance to do so later. But for now it is just PURE eyecandy.

Any one know when the OpenCL Version will release?

Any one know when the OpenCL Version will release?

Ahh, lets just get it working first. From what I understand, OpenCL needs more development in it’s own right. And lots of people have invested in Cuda hardware for various reasons, so this will benefit many people even without OpenCL integration. (course I’m biased, I own 6 GTX 570’s and I’ve always loved Nvidia)

That robot scene looks amazing for something quickly put together, and it also looks like there’s a surprising amount of materials available for use in Cycles already in its early stage which are usable via nodes.

Once Brecht irons out some of the initial bugs and crashes and we start getting Windows builds I might just have to play with it.

Yeah, I have seen some stuff floating around so far of custom materials that people have slammed together in the last few days, but nothing much in the way of anything useful. (Unless semi transparent balloons are an every-scene item, but they aren’t for me)…

I don’t really know WHY I want a windows build so bad, afterall, this laptop is running on a Core 2 Duo and Vista… Still, it will be exiting to see how this performs with a lower end system, might even report some of the details over at the main easter egg thread once I get some stuff on that. Of course, I am waiting on a Windows build…

Ahh, lets just get it working first. From what I understand, OpenCL needs more development in it’s own right. And lots of people have invested in Cuda hardware for various reasons, so this will benefit many people even without OpenCL integration. (course I’m biased, I own 6 GTX 570’s and I’ve always loved Nvidia)

If I am not wrong luxrender performs much better in AMD cards (ATI). I am interested in future benchmarks of cycles in nvidia and ati cards to see who one is better. ATI cards have around 1000 processors in latest cards but nvidia around 500.
We will see if Nvidia or AMD wins in this battle with cycles. In luxrender some months ago AMD was the king, just now I don’t know if Nvidia just launched a 2000 processor card or something. But I think things continue the same in luxrender. The differences in the benchmark page are astonishing compared to Nvidia I remember seen.

Three minutes of playing and two minutes of render (CPU only) gave me this: 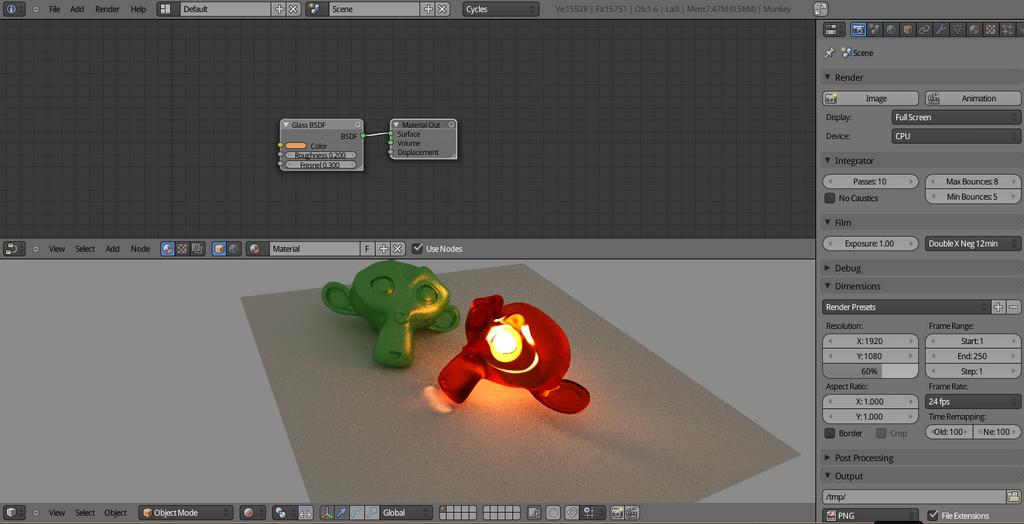 I know it’s grainy, but I didn’t want to spend half an hour rendering two monkey heads. I am still having trouble getting the GPU version to work. I will attempt more complex scenes if/when I can render with the GPU.

I’m converting my
creative commons test scene Sala into Cycles. It could be helpful for
tests

Here’s how its going, missing are bumps, alphamaps, top glass, some
textures, sunlamp, HDRI… there are some bugs like the floor image not
showing anymore… it used to!

Here’s a luxrender version (composited) with all the features
http://www.3developer.com/sala/sala.png

I finally got GPU working! Here is my first GPU render: 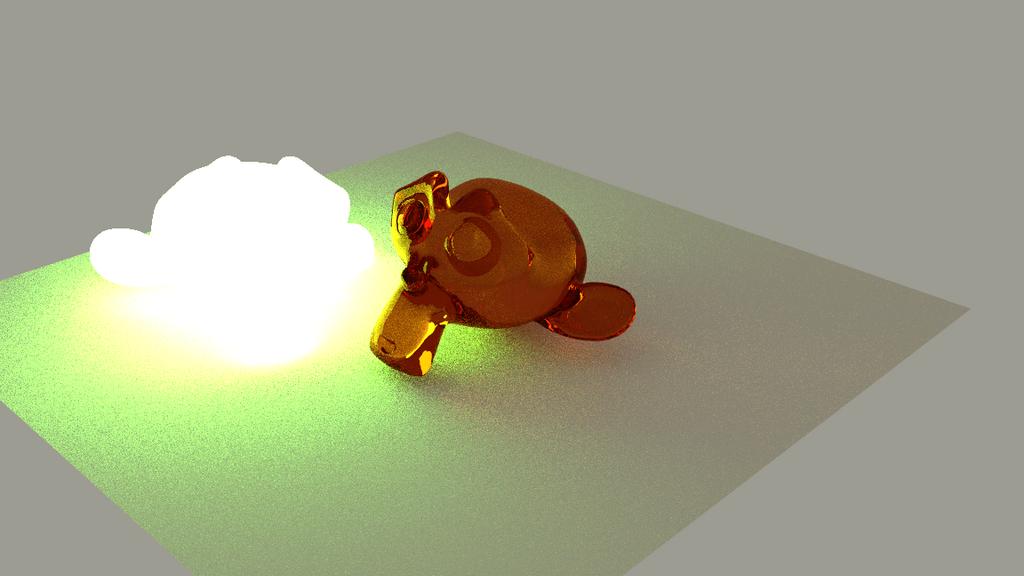 I suspect I am not going to get very much sleep for a few days!

I got my GPU working too but its slower than the core2quad xD (8600GTS), I also have another machine with a 9500 so Id be interesting in knowing if its really faster? Time to get a new GPU anyway