I tried 3.0 out with my most recent scene, which is far more complicated than the one I posted above.

The down side? Faster is relative here. There’s an at least 15 second delay between sample updates, so it still takes about forever.

Guess you can’t expect miracles ALL the time.

Hi, just for your info, I tried your scene from M1 thread and got about ~1 second to finish render on a RTX 2060.
It is a very nice scene, congratulate.

I tested your scene.
I had to activate CUDA in Blender preferences. I tested CPU, RTX 3060 and Eevee. it is a 35mb mp4 file made with OGS (yes it takes a bit of performance). I don’t have Youtube or Google files account. Do you have an alternative for a place i should upload it to?

There’s Dropbox and Onedrive, though it can be kind of a pain to share files with the latter.

For a video, your best bet is to just to sign up to Youtube, and upload it there. If you’re suspicious about Google’s tendency to get all up in your grill over everything, use a burner email.

A question about Cycles-X and Macs:

If I understand things correctly, Cycles-X will abandon OpenCL to rely on some sort of AMD API for AMD GPU hardware acceleration.

My question is if there is any sort of hardware acceleration planned for Macs, be them old x86-based ones with Metal-compatible AMD GPUs, x86-integrated GPUs, and/or Apple Silicon-based Macs.

I’m the owner of an old Mac Pro 2011 with two RX 560 Metal-compatible cards (plus a just as old PC that hopefully will be replaced somewhere next year), and I’d like to know if I can look forward to some second wind upon my old beast’s sails

I only used the Cycle-X builds to make this (posted in the finished works section recently) I hit couple bad builds, which made me lose some work/progress but that was expected.

The maggots and the flies were populated with Geometry Nodes.

[Sinektronaut_KK_WEB] Officer Ray got kicked out of the ISS due to chain of unfortunate events. The ISS crew got orders to kick him out and left him dying in space far away the station after they realized that Ray had contacts with flies. It was decided that he was a big threat to the International Space Station and there was no way to properly handle the current situation without endangering the other space crew on the station. The scientist on the ground speculated that these conditions led… 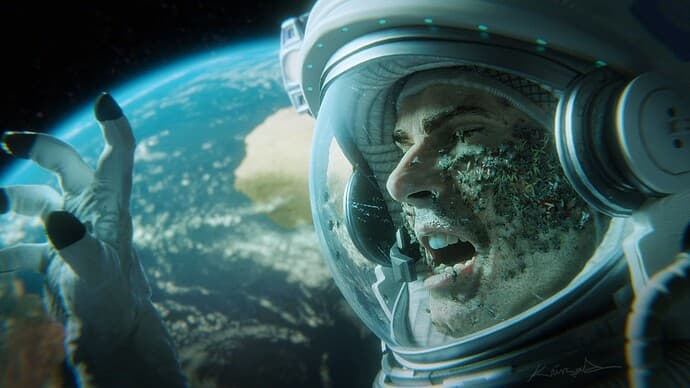 You gave me the desire to rewatch the end of Akira.

I got one better. I made a video.

It might feel even faster if denoise doesn’t run on the first sample.

The idea is eventually to have a Metal backend, yes. There’s not a timeline for one atm though, see in particular https://devtalk.blender.org/t/is-there-interest-in-supporting-a-metal-version-of-cycles-for-macos/4475/420

Yeah, the last post do not bodes well. Maybe if Apple starts to contribute to Blender Dev. Fund.

I see. Thanks for the linkie

I tested todays 3.0a build including the recently merged Cycles X update with a scene that was created in 2.93 (can’t share it due to some of the models). It has a lot of foliage scattered around and some volumes.

Are these differences normal as it’s still in alpha stage or am I missing something?
Also, viewport navigation seems to be way slower although all scatter systems are turned off (not related to Cycles).

much more impact your message will have if you post your feedback here https://devtalk.blender.org/t/cycles-x-feedback/18598/

Has anyone done any experimenting with the tile size in C-X? The default is 2048, which is too big if you are only rendering at 1920x1080, but is too small if rendering at 2560x1440 (which I often do for stills). I tested with CPU rendering at much smaller tile sizes (32 or 64), but it just bombed out after a few tiles.

Having gotten used to not worrying about tile sizes during the beta stages, I’m wondering how much difference it really makes, now. If I have to, I’ll test with a render heavy scene, but would rather not repeat someone else’s research.

Hybrid tiles seem to just render 1 tile, and no tiles takes too long

For me rendering with tiles is a lot slower for some reason.

Finally had the time to try Cycles X. Love the addition of anisotropy and IOR to SSS.

[metin-seven_realistic-3d-modeler-sculptor-illustrator_zombie-goblin-vampire-sculpture] 🧛‍♂️ A zombie goblin vampire reanimated by Frankenstein. Based on a great drawing by Kevin Keele. I departed from my usual cartoon-style comfort zone for this 3D sculpture. It was an interesting endeavour.

Used Blender’s new Cycles (X) version for rendering. Love the addition of anisotropy and IOR to the SubSurface Scattering.

If I render an acually large size the whole render disappears when it’s finished and I can’t save the final image. I have to shrink the tile size to like 256 of smaller to get a final image I can actually save

(but that was a build from a few days ago)