On the advise of a really helpful guy, I decided to re-model my machine gun, and this time I made use of the snap-to, making sure all my lines didn’t overlap. I also deleted all internal faces and vertices, and made sure to remove all doubles. But for some reason when I select all non manifolds, I get my model lit up like a christmas tree! I like my model the way it is, and don’t want to change the shape, but now I can’t decimate multiple copies and change the level of detail because mesh in too much non-manifold. (i check this every 10 or so steps… seems like it will let you get away with so many non-manifolds before it won’t let you decimate any more).

Please help, i’m so pissed off right now, i’ve taken my time and carefully constructed this model - after about 3 times starting it from scratch.

I want to be able to make at least 2 decimated copies for exporting to O2 for a game.

here’s a pic of what it doesn’t like. I can’t figure it out

and the blend file.

I’ve highlighted some of the many problem vertices. You see them lying on an edge but they are not attached to the edge, just floating above it
If you move the vertices you’ll see them pull away from the main mesh. You want a continuous surface so you’ll have to add additional edge loops to join all these. 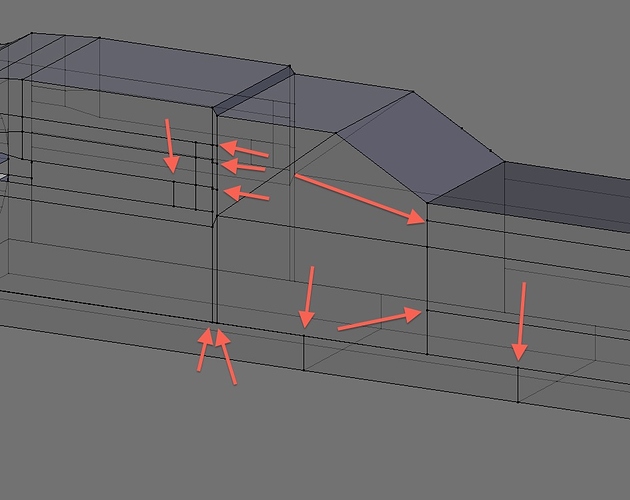 Result of freedom of bmesh, i suspect…

Result of freedom of bmesh, i suspect…

I don’t get what you were referring to, or what the blend file you sent back was supposed to show me.

eppo made your mesh quad/tri only, so you don’t have supposedly closed surfaces which in fact are not closed. if you try to pull away some of the vertices you’ll see that it creates holes in your mesh. to fix it you’ll have to integrate those vertices into the faces they’re touching (thus creating ngons), or you add additional edgeloops and stay quad/tri only. to be on the safer side the second option is preferable because ngons (faces with more than 4 edges, new with bmesh) are quite new to blender, and support in exporters have trouble dealing with them. So do modifiers, I checked it for decimate, doesn’t seem to work so good.

Just some of examples, where modelling flaws wont allow for normal work flow after.
Blend file i attached is without this. i’m really, really frustrated… i’ve again for the 5th time started from scratch… when i get halfway through, it says damn non- manifold mesh!! how can I get rid of this f*ing crap? I’m gonna snap! Not every model is going to be round or perfectly square. I turned on snap-to, checked that lines didn’t overlap. Checked internal vertices and faces deleted… checked that I don’t have an object with more than 4 sides… even when I started this model again… I got about 5 shapes in, and it told me 2 of the lines were “non-manifold” the damn object was a perfect box! Lines were “snapped” and it only had 4 sides.

please can someone tell me a button I can push to tell the program to F*uk off?

i mean seriously… i need this model to be able to decimate for export into a game.

tell me what is soo bad about this model, and how to fix it please!!! i’m losing my shit over this!

As other mentionned, you have several problems on that model, by example, this vertice : If i move it a bit, you can see that it is a problem Because it’s just there to “hide” what is a hole, leading into the “non manifold” kicking it.

There are a lot of those things all over your model, and that’s exactly why you have the non manifold detection highlighting the model in so many places.

Additionally, out of this area having already the same kind of vertices problem, you have a hole in the model there : Hole are no problem in normal time, but this hole is not “solid” meaning you can see the inside of your model that is “paper thin” , leading again into a non manifold problem.
And example of how you could fix the problem : (and see an example of how to fix the bad vertices problem in this area too, note : you can merge 2 vertices by selecting them, pressing W then Merge, and select how they should be merged, i used this in the fix example)

pow, what a mess…

maybe instead of remodeling everything you can use a bmesh version of blender.
But dont look at the topology then…

Best thing: -Learn about good topology and next time you will have more “fun”.

what is bmesh? is it a version of blender for noobs?

why is my model a mess?

thanks eppo and sanctuary for at least pointing out what do do in order to fix.

dave62, if you are going to critique - by all means, at least point out something helpful.

what is bmesh? is it a version of blender for noobs?

why is my model a mess?

thanks eppo and sanctuary for at least pointing out what do do in order to fix.

dave62, if you are going to critique - by all means, at least point out something helpful.

eppo… I have studied your diagram, and you stated that I should get rid of the triangles on top, and the vertex on the bottom, if I were to continue that line straight up and wrap around, then I could get rid of more triangles… right?

I don’t understand what you meant by Ctrl +R all around… what am I suppose to do there with all those points??

thx… and excuse my noobness.

Bmesh is what allows Blender to support n-gons , not only triangles and quads faces like Blender was only supporting up to Blender 2.62, and comes with some new nice tool (especially the knife) , the next stable release (Blender 2.63, and unstable/experimental ones you can find on graphicall and the buildbot) will feature Bmesh .

But before exporting a model to any kind of game engine, you will need to convert your n-gons into tris or quads, as i don’t remember having read of a game engine supporting them.
N-gons are only there to make the modelling process easier.

Now regarding your model, you must first fix all those bad “floating” vertices, to do so:
-select a bad vertice -hold the SHIFT key then select one that is good (i mean that is solidly a part of the model, not floating to hide a hole) Open file with new default cube, switch to edit mode and do Ctrl-R. It’ll make a pink line around that cube - show a place where cube will be divided by this line.
By scrolling mouse wheel, pink lines are added or subtracted - more or less divisions. After one leftclick you could slide Edge Loop - this is it’s name - to needed place ( in a beginning it’s in a middle of between two sides). If you hit Esc, it’ll stay in exact middle.

On a model, if you Shift-Alt-Right click on a line, that selects such Edge Loop ( and this could be easily deleted - hit Del and look for Edge Loop).
That is a most useful thing for modelling something out of Cube, which is a base for your model.
Subdivide by Ctrl-R, switch to Face Select mode and extrude - E, pull- G, delete- Del, rotate- R, size -S, whatever.

If you need some part of model coming out, cut from sides by Ctrl-R, select created face and E and G on x or y or z axis. If to make a hole - delete face(s), select surrounding edges ( again - Ctrl-Alt-Rigtclick on one - Edge Loop ) and e and g on one of axis.

Sticking to these shortcuts while modelling wont allow for loose vertces, not finished lines. There might be some overlapping faces if you’re not careful, so called inconsistent normals ( easy to repair by Ctrl-N in edit mode), but that’s pretty much of it.

New, bmesh version of blender, by use of so called n-gons allows for a more freedom initially, still quite fast you might end up in a situation you’re in right now. As I see, it might be darn confusing sometimes :).

along length (assuming barrel is a separate part), delete all vertices from one side and use Mirror modifier on the rest, you have cut your workload in a half - Mirror will do the rest.
At the end just click the Apply button.

thanks a million guys! I will post any more issues I have!