Dark Angel is a show, I feel, had much potential, somehow never realized.

I also wanted to get a more cartoon look. It does have more exaggerated features, though I’m not entirely satisfied with the overall look. I’m trying for something between what SquareEnix does and the look of The Incredibles.

I wanted modeled looking hair for this one. That’s why I didn’t use particles. I will in future projects.

I tried adding a backlight, but that didn’t work out so well. I’m fine without the backlight as the original scene didn’t have it either.

I also wanted to start learning the node system for compositing, but I have been distracted way too much from this project, and just wanted to get it done. So it was composited in GIMP.

The graffiti used on the texture map (which is too small I realize) along with the sky and moon images were all found online. I didn’t keep track of which belongs to who. So, if you recognize someones work or your own used in this image, by all means, give or take proper credit.

I am pretty much pleased with how this turned out, for what it is. The anatomical geometry still needs refining, and the style still needs developing, but this is a step in the learning process for myself.

Dark Angel is the property of 20th Century Fox, as far as I know. 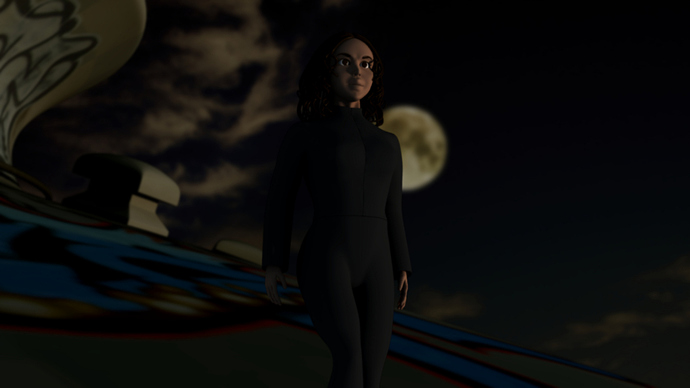 The outfit and the stance are ok, but it does not look like her at all.

Yeah, I was going for a more cartoon caricature style. I’m still working on developing my style.