I’ve decided as a first big project of mine, to model the gunship from Visceral Studio’s Dead Space 2.

It took me several days to get through most of the modelling but I finally finished it.

The aim of this project is to recreate a realistic looking model of the gunship using textures, lights, and a lot of other stuff I have almost no idea about how to recreate. I also want to ‘rig’ it? So that parts that move can move within a certain angle and on a certain axis. It’s got a decent amount of moving parts.

Eventually, if all goes well. I want to make a short animation of it, perhaps demonstrating it’s capabilities on some sort of platform. (Like there is no environment except a glossy floor, and it just gets up, flies around a bit.

Here’s an image of the gunship in game 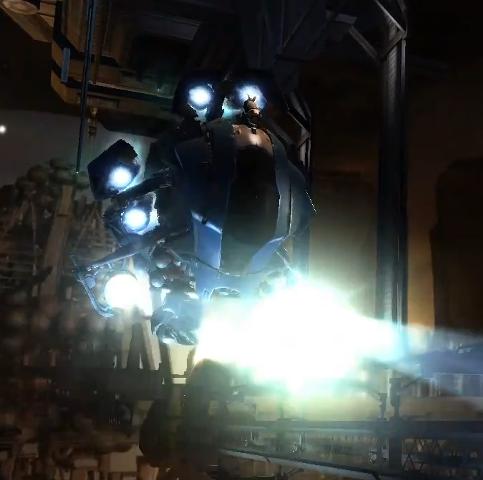 So I then went along and went through various FRAPS video recordings I took when it game from gunship scenes, and used them to get a good idea of what the gunship looked like. It took me a couple days. (Didn’t model all day, just a few hours)

And then I finished up with this: 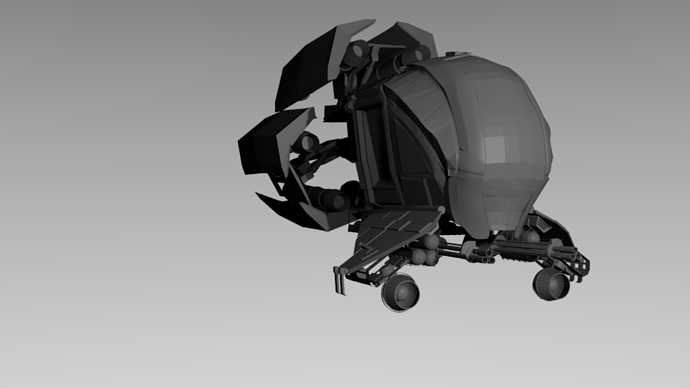 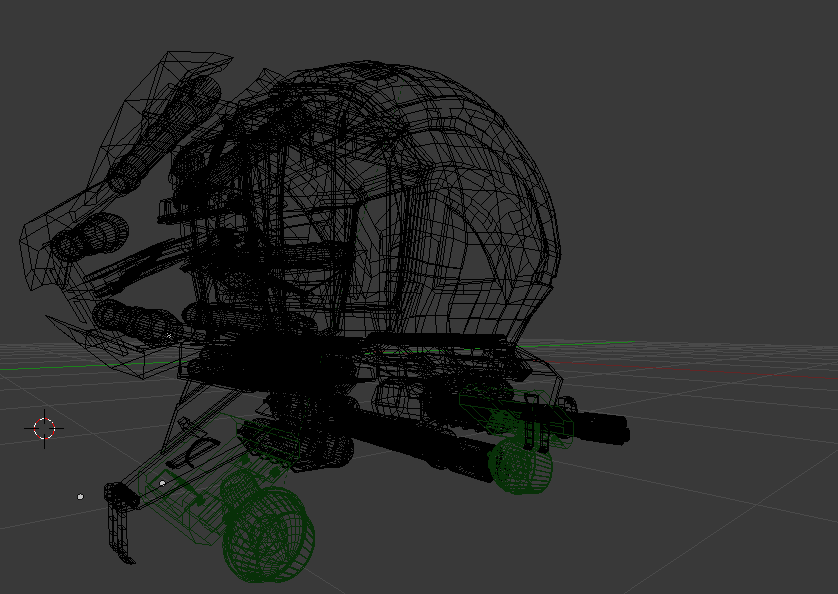 Now that the modelling is pretty much done, I’ve decided to move onto texturing the gunship. But the problem is that I can never seem to get textures to work correctly, hence usually omitting them completely from my models as they make parts look hideous, the lighting never works, and it ends up looking like a patchwork of bright, incompatible textures rather than the metallic, dark, and seamless look it should really have.

Here is my first attempt, which is frustrating. I tried looking up a tutorial but I just got one on texturing spheres. And it didn’t seem to go anywhere in the first 15 minutes which is increasingly annoying as I find many tutorials that seem to drone on and never get to the point of how to just texture it correctly.

Here is what I got so far:

TexturesNotworking2_zps1857da7c.png960×540
Yet another frustrating start, with incorrect lighting right off the bat.

I guess I will update my progress as I go, but this may take a long time to complete. Perhaps I will not even texture. It remains to be seen.

Update: Finished Textures, but I will be redoing the engines as well as other parts. I’m really terrible at textures, could anyone volunteer to help? 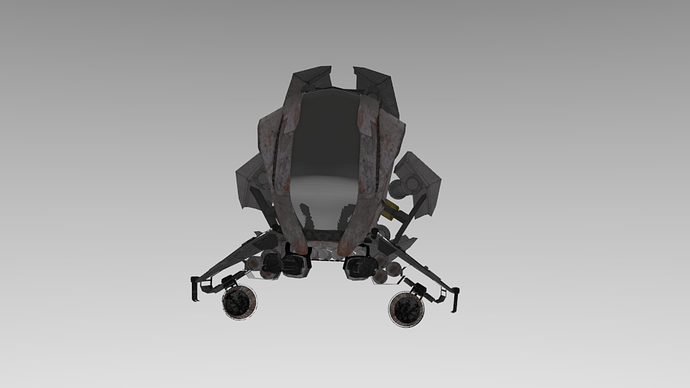 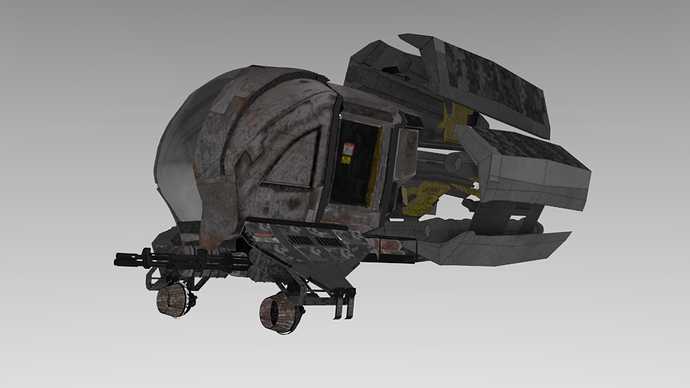 They look okay, what kind of help do you need?

are those the original textures from the game?

I want the textures to look like they come out a lot more or give it the real feel it had when you look at it in game. Right now it looks like it’s made of some flimsy scrap metal welded together. But I wanted it to have a hardened looking outer shell with scratches over it.

Whenever someone else makes a texture, it looks awesome. Mine look like someone tried to paint on metal. Sigh. Anyhelp would be awesome.

aln727: No they are from google images. I suppose I should be careful

I want the textures to look like they come out a lot more or give it the real feel it had when you look at it in game. Right now it looks like it’s made of some flimsy scrap metal welded together. But I wanted it to have a hardened looking outer shell with scratches over it.

Whenever someone else makes a texture, it looks awesome. Mine look like someone tried to paint on metal. Sigh. Anyhelp would be awesome.

I don’t know if you’re looking for advice or actual work on the project but if you put up the .blend I could have a go at working on them for you.

I don’t know if you’re looking for advice or actual work on the project but if you put up the .blend I could have a go at working on them for you.

Advice is always helpful, but more often than not I don’t know how to do what people advise. Or people just don’t really have much to say. (Like it’s so messed up it’s beyond comment’s to repair)

Here’s a download link to the mesh files. (no textures) if you want. Mine were literally UV’s with clone stamped textures on them. Honestly terrible. If you could even do one panel and tell me how you did it it would be awesome.

Textures don’t make a scene as much as good lighting and good materials all working together with decent textures. I think the textures could be passable if you set up some nice materials and put it in a well-lit scene. At the very least, it might help you notice what direction you need to take your textures in.

I agree with A.Tim. I’m no expert but your model looks good to me. And the textures are definitely heading in the right direction. You should snag some studio lighting HDR files from Deviantart.com and render with an AO pass. I think you might like it better. You could also add some normal mapping to the textures you already have.

I’m not sure what you think of the attached image, but I added a night sky HDR (cgskies.com) and then an emission plane off center. I rendered an AO pass and used the compositor to combine the AO and Image passes. I didn’t texture anything other than change the front poly to a dark glass material.

If I’m telling you stuff you already know, my bad. Just wanted to provide an example to show what some different lighting and an AO pass could do to your nice model. 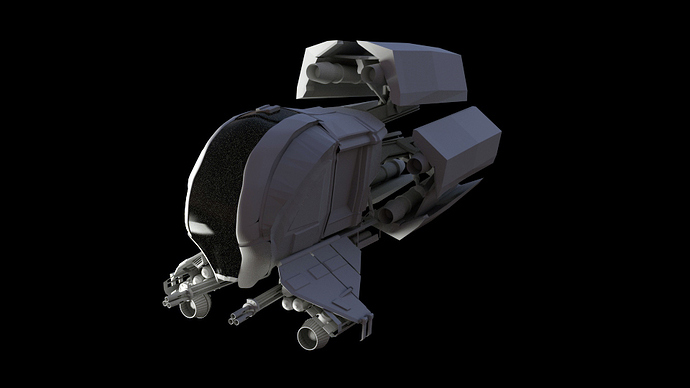 Thanks so much for the answer and taking time to try and improve my model. Most of the rendering tools or features you added to it are alien to me. I’ve in fact never heard of them. It would be great to know what they are and how they work.
If you could do that, it would be awesome.

Could you please explain what an emission plane is, as well as an AO pass?

Is the render I provided more along the lines of what you’re looking for? Are you intending to use the gunship in the game engine or for a video? Do you want to render using blender’s internal renderer or cycles? The reason I ask is because your desired end result has a lot to do with how you create your lighting and material setup.

The render above is rendered with cycles. By AO Pass, I mean an ambient occlusion pass. An emission plane is just a plane (Add > Mesh > Plane) with an emission shader assigned to it.

If you are unfamiliar with what those are, I suggest watching some beginner blender/cycles tutorials on cgcookie.com/blender/ and blenderguru.com.

Alright thanks for the tip!

AO is kind of a pretty big deal.

Once you find out what it is, you’ll likely be using it somewhat frequently. It’s a great thing to have in Blender.

Hey, been a little while since I made an update. Been sorta busy last week or so, but this weekend I went ahead and got some modelling of the cockpit down for people to see!

I’ve still got to get the modelling complete, and then get the lighting and texturing in.

Anyway, this is what I did so far: 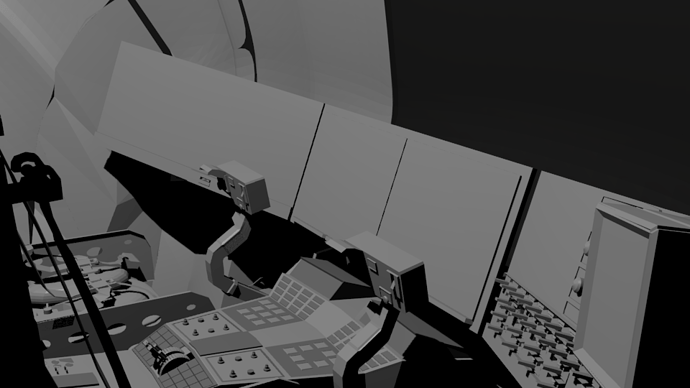 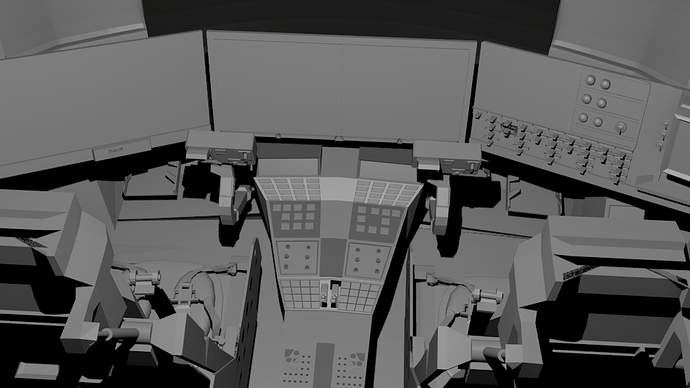 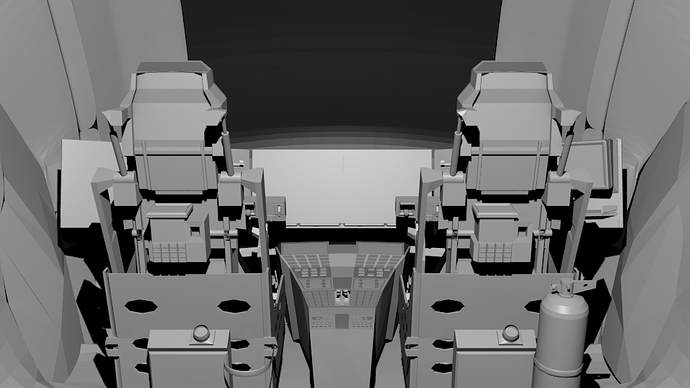 That’s it for now, I’m going to spend some time working on the walls and adding a little more detail before going through the painstaking task of attempting to texture anything.

Dude, from what I can see of your meshes, they look great. They’re very solid and detailed, and I know they must have taken some patience. Texturing, materials and lighting all take a little bit of a learning curve to get the hang of, but seriously, you’ll pick it right up. Don’t dread them and you’ll be just fine.

This will most likely be good practice for you. Just take it slow, and tackle one thing at a time. Post screenshots in between each step and I’m sure people will give you input if you’re off track with anything.

It’s just a matter of striking a balance with everything. Don’t try to win any races, and I bet you’ll find a new-found appreciation for playing around with the settings and achieving cool new effects.

I’m on a schedule to complete the short film by mid march. Or have it close to completed. I’m actually doing exactly as you said, and I am taking the models piece by piece.

I’ll post some screen shots of the cabin textures once I’m done. (Doing control sticks, and chair ATM) (Then control panels) Then walls.

Ugh. So much work lately I haven’t been able to do much. I did manage to finish texturing the chair today, looks alright I suppose, a little unpolished and lacking the ergonomic look the cushions were intended to carry. 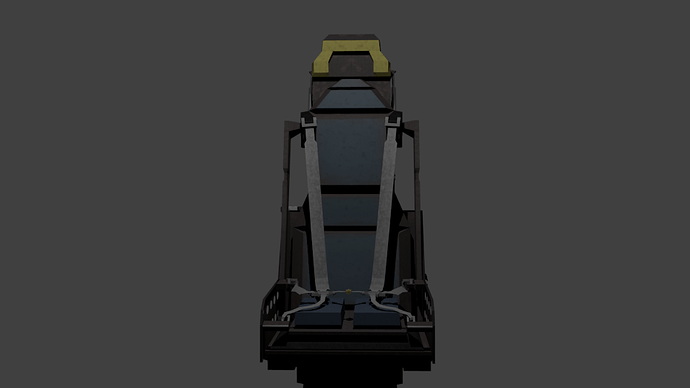 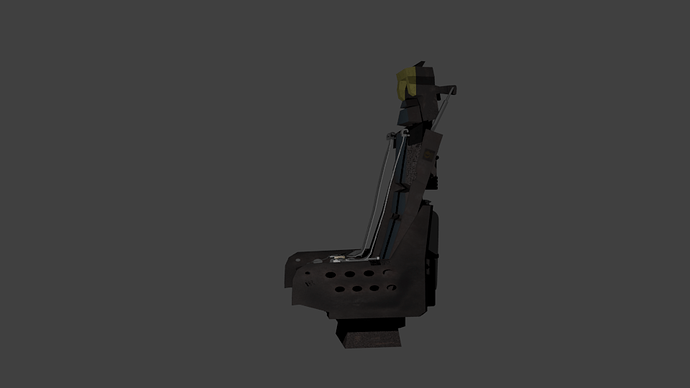 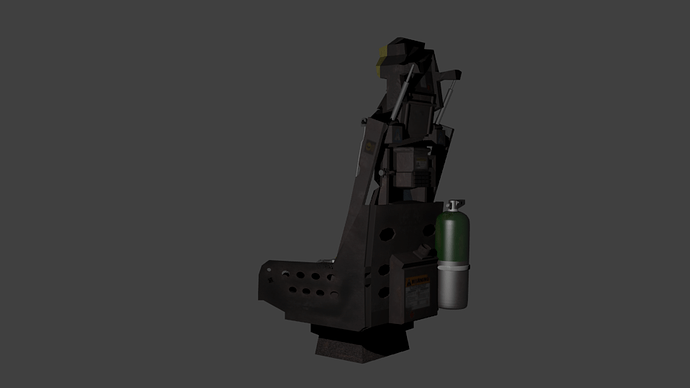