Here is the final version of my Deadpool Spiderman comic cover project. The idea was to simulate every part of the cover as part of the scene itself, including titles and speech bubbles.

I know that Spiderman’s suit is missing the webs, but after trying for hours and hours to get them on there correctly, I finally just gave up and I’m calling this one done. 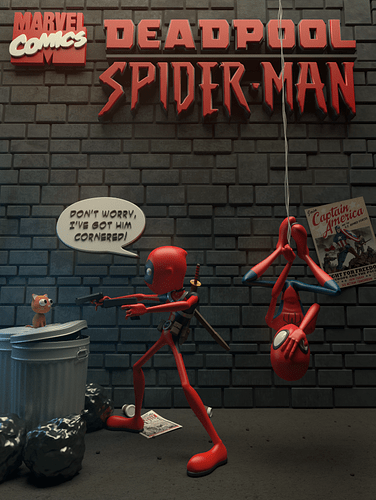 This is great! One of my favorite blender scenes I’ve seen.

I really dig the wall. Is that a bump map or mesh?

I used the Masonry addon (which I believe is still only available in custom builds) and generated a brick wall. Then just threw a grungy texture and a slight bevel on it and called it good.

Awesome! I love it.

Really nice final image. I see you had no problems with the rigging. Meta rig or did you rig from scratch? Did you have to do anything special to get the accessories to move with the body?

I created the rigs from scratch, but they were fairly simple rigs. I did have some major issues with the accessories not deforming with the body (which included the webbing I had made for Spiderman’s suit), so I actually had to pose the body, then manipulate all the accessories to fit the new pose. The webbing turned out to be a lost cause, so I just left it out. It wasn’t too complicated, but I really wish I could have figured out how to set them all up to move properly with the rig.

It deserves to be featured imo.

Great modelling, texturing etx, but it’s also a great example of the artform. It tells a story in this single image.

Cool little image! You should have solved the webbing as a texture (bump or normal map can go a loooong way!). My only remark is that there is too much specularity on their suits (I know that they wear spandex, but…)

looks great!
but how did you do the logo’s?

The logos are 2D curves and text that were extruded and beveled.

hey JM…your project here is Great >> really like the creative & interesting take on the characters, very unique
thxs for posting.

Haha, it’s a very cool comic cover. Even without the webs, the scene looks amazing so he story draws all attention from his chest

lovely image,it works without the webbing.

Love the cartoony modeled style of the characters.